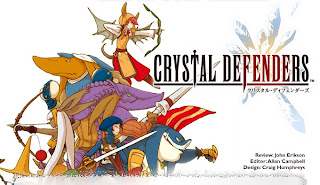 The tower defence genre is one that usually receives the most amateur of support. Because it’s relatively easy to program, and not as intense on the art and music departments, finding high quality examples of the genre is sometimes difficult.

There’s some to be sure – games like Mikado Defenders, Vector TD or Fieldrunners, for instance. One in particular stands out above the others though, and remains the essential tower defence game, and that is Final Fantasy Crystal Defenders.

Yes, this is a very old game, but we felt that it was important we had one for a game that has a strong argument for being the very best in the genre.

As you’d expect from a game carrying the Final Fantasy brand, the production values are the first thing you’ll notice, and they’re stellar. Reusing assets and music from the Final Fantasy Tactics games on the Game Boy Advance and the Nintendo DS, Crystal Defenders is cheerful and bright, with a wide variety of levels to play through, each with their own distinct visual style.

The second thing you’ll notice after the presentation is the massive difficulty curve. The game is never easy, and is quick to punish misplaced units. Crystal Defenders plays like a standard tower defence game – you pay money to place units, who need to prevent waves of increasingly-powerful enemies from moving down a linear path and off the opposite edge of the field.

There’s only a limited range of units to play with, from the limited range soldier through to the weak but wide ranging archers as well as a few special ability characters that can slow down enemy movement or earn extra money for defeating enemies. Making effective use of those units is critical to success. Though the early 10 or so waves on each level are reasonably straightforward, the next 10 and especially the final 10 require a near perfect balance of units, and a great deal of money spent to “level” them up in the process. 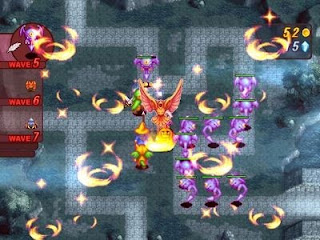 To make matters even worse, gaining really high scores requires you to complete all 30 waves while conserving the monies. Pulling up the Game Center leaderboards shows some truly incredible scores; for those people this game must be more science than mere game, one of carefully placing units to provide maximum defensive coverage.

Where some tower defence games restrict players to placing units within defined areas, the options for unit placement in Crystal Defenders is essentially anywhere you’d like on the map, and this is both a blessing and a curse. Blessing because it opens the game up to adopt far more strategies than most other tower defence games. Each level becomes a giant puzzle requiring jigsaw puzzle skills as well as a deep understanding of how all the unit’s mechanics work with one another. 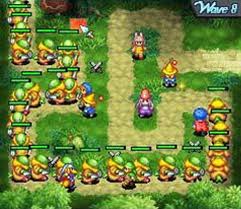 The curse is that it takes a great deal more practice than you might expect from a “mere” tower defence game to get good at this. Getting through 30 waves, let alone earning high scores requires patience, persistence and practice. I like to call it the great three ‘P’s, and it’s a requirement of most great strategy games.

There’s three categories of difficulty – each with more complex maps and a few extra tools at your disposal. Most players will find the first set of maps too difficult. And that’s what makes this game a special experience, because that difficulty is never unfair. Where other tower defence games become either too easy or downright frustrating after a while, Crystal Defenders makes you want to play it through each failure. One or two waves further on is reward enough.

So, while tower defence games are usually expected to be throwaway, and while this game well never get the plaudits of some of Square Enix’s more high profile projects, this game (which is available on almost all platforms in one way or another) is worth a look if you’re one of the few that haven’t already played it.