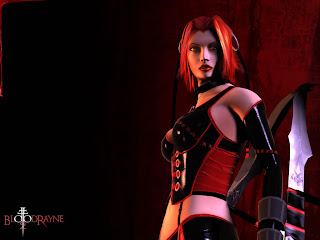 Wayforward stands to benefit greatly from the digitally downloadable medium. As a 2D specialist, its games will never stand out on a retail shelf to the masses that clamour for the Call of Duty or Final Fantasy blockbusters, and yet over the years it has built a dedicated niche following, and the digital downloadable platforms allow Wayforward to produce more games cheaper.

BloodRayne is its newest project, and full props to publisher Majesco for revisiting this gory franchise with a risky 2D romp, rather than try for something more traditional. The result is by far the best game in the series to date (admittedly that wasn’t going to be hard), and Konami had better be on its toes, because WayForward has in many ways just proven it has a better grasp of the gothic than the teams behind Castlevania.

To get something out of the way first though, this game is hard. WayForward games are rarely easy, but the challenges Rayne faces takes things to a whole new level. Enemies typically attack from both sides, and though Rayne is an agile bloodsucker, so are her opponents, and fighting wars on two fronts is usually painful – ask Napoleon or Hitler.

Though it’s a difficulty that is at times frustrating, successfully navigating through the levels and uncovering their secrets is a true joy, thanks to the hyper-detailed backgrounds and silky-smooth animation. As is traditional for WayForward, the use of colour in this game is unbelievable. Though a lot of it is indeed red and black, those reds are vibrant beyond anything Castlevania has ever managed, and the subtle use of less primary colours across numerous layers of both fore and background builds a rich tapestry indeed. There are those that claim that visuals don’t count for much, but BloodRayne simply looks better than anything else on the PSN to date, and it is one of the better experiences on the service for it. 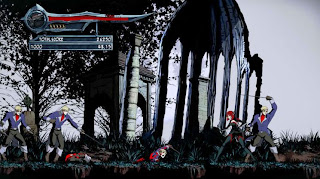 In terms of the actual gameplay, it’s also on course for WayForward; traditional, but effective. BloodRayne pulls all the typical visual tricks of the modern platformer to spice things up; for instance there are times where Rayne will find herself behind walls and objects and as such it’ll be a case of X-Ray shadows fighting one another. This has been done in everything from Donkey Kong Country Returns through to Shank (also on the PSN), but it remains an effective visual gimmick. It works because although those gimmicks don’t actually change the core gameplay any, it sure as heck feels like you’re doing something different.

What separates Rayne from lesser action platformers is the speed and fluidity of the leading lady’s movements. Attacks chain together amazingly easily – the first time you pick up the controller you’ll not realise what you’re doing, and then somehow Rayne’s ended up on the other side of the screen amongst pools of blood. It’s also visceral. There’s blood in this game – way too much of it for what the humans and monsters that stand in Rayne’s way should contain within them. Blood is a central motif of the game as befits a vampire title – drinking the blood of enemies restores health after all, but the amount of gore nevertheless marks this as a decidedly adult turn for the gothic horror genre in videogames. 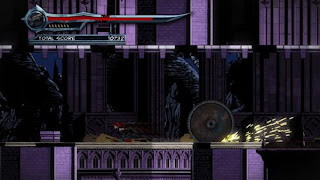 Where the combat is hugely entertaining and controls a dream, the platforming is shakier. Rayne has all the usual moves, from wall jumps, to back flips and airial dashes, but nothing is as precise as it should be. That it’s more comfortable playing this 2D game with the control stick than the D-pad is always a bad sign for platforming precision. Then again, the platforming is only there to funnel Rayne to her next nest of victims, so it’s a forgivable chink to the otherwise sparkling armour.

And ultimately, we should be glad of this game not because of what it is, but what it could have been. It would have been so very easy for Majesco to appoint some random developer to cobble together a God of War clone, and it would have worked in that genre. But by taking a risk and letting WayForward do its thing we’ve got a better game. One with production values so high it’s easy to forget that at its core, this is “just” a fast and bloody button masher.

Essential stuff. It’s going to be hard going back to the pedestrian pace and bland environments of Castlevania after this masterpiece.

New screens + release date for A Game of Thrones: Genesis