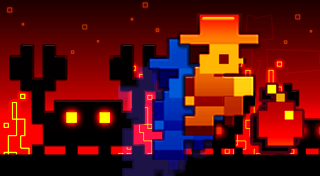 There’s a point where retro becomes too retro for its own good. The good “modern retro” games, such as Dot Game Heroes or Spelunker HD, understand what makes retro fun, while also understanding that retro games were not perfect and some modern conventions are a positive development in the name of playability.

Arkedo Series – 01 Jump is a retro game through and through, but it doesn’t necessarily understand what was, and wasn’t good about the frontier days of the industry. It has flashes of utter brilliance, but the experience is just not consistent enough to elevate the game to the upper echelons.

The game itself is wonderfully simple in design. There’s a little man that needs to save the world from evil robot crabs or something – the plot, such that it is, is utterly random and retro-style amusing. He does this by collecting a certain number of bombs in each level, with just a jump button and very limited number of throwing knives as a last resort.

The bombs tick down slowly, but for most of the levels, there’s plenty of time to collect them all. While collecting them, the little pixelated hero also needs to dodge environmental hazards such as rocks and falling spikes, bats, crabs and skeletons. Once they’re all collected, it’s time to head to the door exit to the next level.

Levels are designed in a very traditional fashion, with some pixel-perfect precision required on some of the more difficult stages. Indeed, it’s the level design that is the game’s highlight, with some very clever nods to some of the classic platformers of the day. The first experience of the level based on the underground warp pipes of Super Mario Brothers is a guaranteed smile, for instance.

The music, too, is a perfect interpretation of the kind of upbeat, cheerful chiptunes that made classic platformers fun. So in terms of looking and sounding the part Arkedo Series – 01 Jump has it down pat.

Where it struggles is in the difficulty. Overall, the levels are quite challenging, as can be expected from a retro throwback. However, lives are limited and there is no way to save the game, nor are there save points along the way. In other words, the game has to be finished in one go.

This would be prohibitively difficult for most gamers, so a concession has been thrown in – extra lives are liberally scattered through the more difficult levels. As a result, most reasonable gamers are under no real risk of the “game over” screen. But they might find themselves having to replay some levels multiple, multiple times.

For instance, I personally got hung up on a level in which a horde of skeletons were throwing deadly bones up through the floor. Because the direction those bones travelled was somewhat random, and the size of the bones was quite glad, weaving through the airborne sticks of death was more a matter of luck than skill. That level took some 30 tries before I passed through it – but there was an extra life heart at the start of the level, so I finished the level in much the same state as I started.

It makes the difficulty arbitrary, and arbitrary difficulty is truly frustrating. What has made other, recent, difficult games enjoyable is the sense of fair challenge. Demon’s Souls was difficult, but that difficulty was never offset by free lives and equipment every time you set out. 01 Jump is just cheap.

It’s a good value package, with plenty of levels to play through, then some challenge levels to boot, but this is a game that has been floating around since 2009 on the Xbox 360. The PS3 release really should have been an opportunity to rebalance the game. As it stands, it’s still a whole lot of fun, especially for those who remember the “good old days,” but it doesn’t quite hit that magic formula that makes it a must-have.