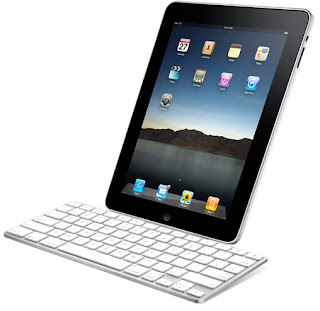 The iPad is a great gaming console. Many would dismiss it as being a device capable of little more than Angry Birds and Flight Control, but there are some deep and engaging experiences available on the device.

With that in mind, here’s our recommendation for 10 serious games for the iPad that stand up to the quality of anything offered on console.

Yes, it’s a ‘casual’ version of Sid Meier’s classic world domination simulation, but it’s also a particually good game. On the iPad, it looks gorgeous, and though the core systems that operate the game are more simple than what you would find in a game such as Civilization 5, Revolution still offers up plenty of challenge. 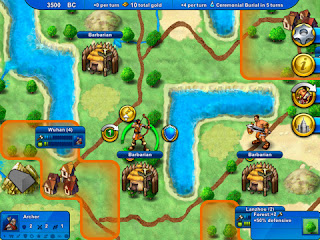 I like to liken it to Civilization 2 (still the best in the whole series as far as soul goes), where the diplomacy was straightforward, and military matters could be won by building up the strongest force the quickest. There’s plenty of directions to take the tech tree, though, and each race of people have its own quirks and abilities, which spices things up and provides incentive to replay what was already an addictive game.

This isn’t a game for micromanagers, but it is still a wonderfully entertaining experience with plenty of variety and challenge. As an entry into the world of Civilization, you couldn’t do better than this.

Romance of the Three Kingdoms HD

If Civilization Revolution wasn’t complex enough for you, here’s the remedy. Tecmo Koei’s classic series has all but died in the West when it comes to console games (though they remain popular in Japan, the liklihood of translation diminishes with each new title), it lives on on the iPhone and iPad.

The ‘HD’ in the name doesn’t mean much in terms of presentation; this is a game that has always been light on visual detail, but it does make better use of screen real estate than its iPhone bretheren; conquering China couldn’t be easier to manage than this game. 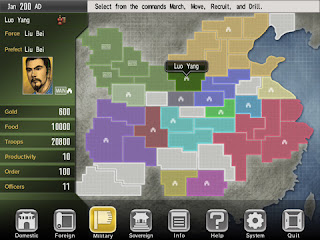 In terms of gameplay, you take control of one of the heroes of the endlessly fascinating Three Kingdoms period of Chinese history. From there you need to build up your empire through conquest and careful management of your territories. There are always more jobs to do than you have actions in this turn-based classic, which is where the challenge come in. Throw in some sharp enemy AI and this is a game that the hardcore strategists and empire builders will not be able to put down.

To this day this game remains a crowning example that the iPad (which has the game) is as deserving of respect as a gaming device than Sony and Nintendo handhelds (which don’t).

Ticket to Ride
(Read the review)

The iPad is a board game playing monster – if you’re into those traditional game experiences, then you’ll find no end of variety here. Ticket to Ride is the best of them. The presentation is unparalleled, the core game is a lot of fun and the online mode is robust. 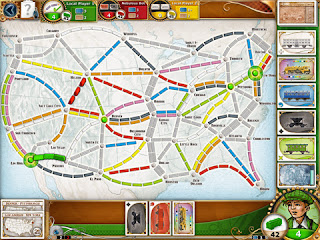 The game itself is quite simple – collect coloured ‘tickets’ from a pile of cards, and then use those tickets to travel correspondingly-coloured routes on a map of the US (or places in Europe, if you pay for the expansions). Like any good board game though, the simplicity belies how addictive the game is, and get a good game going online with friends (or friendly randoms), and it can become very competitive in the best sense of the word.

Before Avadon there weren’t many high-quality traditional RPGs on the iPad. There were some attempts (mostly by Gameloft, and mostly terrible), and some very low budget indie/ hobbiest games, but nothing that could really scratch the same itch that the likes of Baldur’s Gate did in the day. 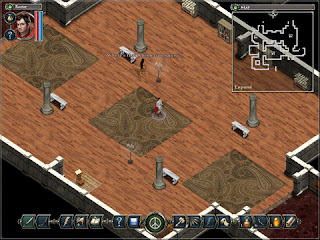 Enter Avadon – a delightfully traditional hardcore RPG by a true veteran of the genre, Jeff Vogel. Taking a character through the lengthy quest, slaying monsters of all kinds and grabbing plenty of loot is a retro player’s dream in this game.

More importantly, it’s a full-length RPG that has made no concessions. It’s easy to plough through 40 hours in this quest, and for that reason alone, this is a stand-out RPG.

“Oh no, not a Zynga game!” I know some people are going to have that response, and immediately dismiss the iPad as a “casual platform” on the basis that this made the top 10, but in truth, Zynga’s take on Texas Hold ’em is the most robust poker game I’ve ever played.

In keeping with Zynga tradition, this is a gorgeous game, with ultra-high production values. It’s also a very populated game, so it’s not hard at all to find a game or two to play. There’s tournaments or more casual play games on offer, across a massive range of buy-in and max bid values. 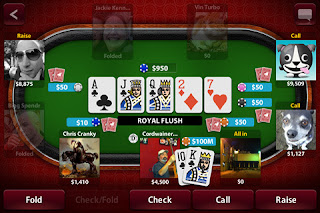 Of course, you do have to deal with some irritating people that only know how to go “all in,” though those people rarely have any of the virtual currency Zynga deals in, so just head into some higher value tables. There’s no real money involved (it would have been nice to have that option) but you can buy extra chips for real money if you have some really bad days. Zynga also gives you credits every day you sign in.

So it’s a casual way to play Poker, but one that you’ll lose hours to playing daily. It’s also a great introduction to the game if you’re new to it, because it requires no real money.

If you like Civilization, you’ll love this game. Unlike Civilization Revolution this remake of the PC classic doesn’t compromise anything in moving to iPad, so you’re getting a massive, nuanced and classic game to experience… though you do need to deal with some outdated visuals. 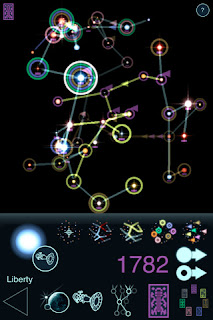 It works like this: You start out on an empty planet playing as one of a range of weird-looking races. You need to build up the cities on that planet, invest in technology and eventually set up defence systems and dispatch fleets of ships to liberate opposing planets.

So, like Civilization, but on a galactic scale. The game does a spectacular (if primitive) job of setting up a breathing space for you to explore, and just like the best of this genre, it’s a game you’ll lose an entire weekend to without realising, until you arrive exhausted at work at the start of a new week.

I never thought that the iPad could do a convincing kart racing game. After all; no buttons, right? But here is Sonic Racing, and it’s truly awesome. The key was simply to remove the accelerate button. There’s still a break button for that rare moment you need to slow down, but otherwise you’re just going to be steering your kart and shooting your opponents down with the zany items inhabiting each course. 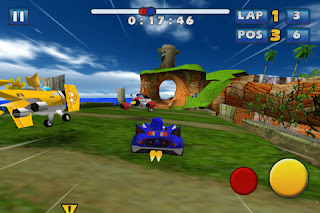 Like the console games there’s a full range of SEGA classic characters to play around with, and a wide range of tracks based on some of the publisher’s favorite franchises. And like with the console games, this isn’t as much raw fun as, say, Mario Kart. It’s still a must have game for anyone who likes arcade racers, though, and it’s enough to both proove that the iPad can do it, and that you don’t need a dedicated gaming console to have a wildly entertaining racing game.

Now we just need to have a genuine FPS must-have and the iPad really does have every base covered.

It’s taken a while for sports game’s to grapple with the lack of physical buttons on the iPad, but with FIFA 11, we’re finally there. FIFA is a full featured package (and nearly 1.5GB download) with most of the features and style we’ve come to expect from EA’s headline sport series. 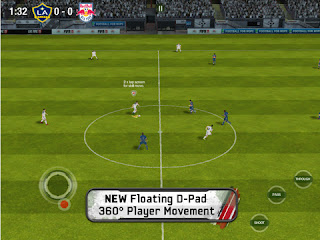 What’s especially pleasing though are the controls that take full advantage of the iPad touch screen, rather than simply slapping virtual buttons down the bottom and hoping for the best. With just a bit of readjustment it’s very easy to pull off complex, team-based strategies, and for this reason it’s the sports game to own from the Apple App store.

Battle for Wesnoth
(Read the Review)

Thanks to the arrival of Final Fantasy Tactics on the iPad, this is no longer the only ‘high profile’ strategy RPG available on iOS, but it’s still arguably better. 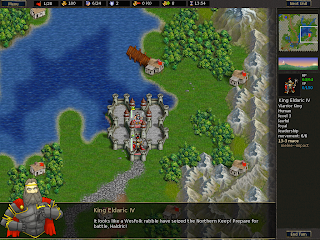 It’s ugly, to be sure. Square Enix games have amazing production values, and this game does not. Sprites have a degree of visual charm, but they’re barely animated, and the environments are flat and featureless.

But what compensates for that is the incredible variety. The game is made up of a massive number of scenarios – ranging from a handful of skirmishes right through to massive campaigns rife with political strife and warfare. As a community-driven project, some of the scenarios in Battle for Wesnoth are better than others, but regardless, you still see more variety in this game than virtually any other out there.

It’s only just been released, but Groove Coaster deserves to be considered for game of the year, let alone one of the best iPad games. Why? Because there isn’t a game out there that pulls off sheer style like this game can. The visuals and the music work together in a manner that is truly artistic: indeed at times this feels like an audio/ visual artwork that a university student, with all the ideas in the world, would out together. 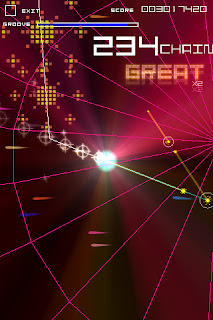 Except of course that it plays really well too. Simple tap and drag controls make keeping in beat with this rhythm game really accessible, but at the same time it can get very challenging, and it rewards people who do get good at it.

Even if you’re not usually in to rhythm games (and I’m certainly not), this is a must have.

Make sure you drop in on our forums to let us know your favourite iPad games!