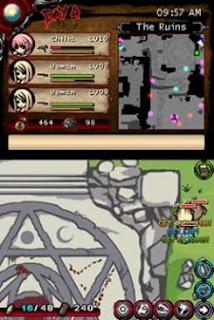 Why The Lost Town – The Dust was developed for DSiWare, I have no idea. It’s an indie production with some great ideas under the hood, that is also severely hampered by the limitations of the platform.
It’s got a nice (if utterly cliché) setup. There’s a village in South America that has been isolated from the rest of the world and, thanks to an industrial chemicals accident, beset upon by monsters. Then one night a girl with serious attitude and weaponry rocks up ready to defend the town. Thankfully, this plot doesn’t overstep its bounds and fades right into the background once the game starts.

It’s a game that can be broken into two – quite literally day and night. The game features a clock that runs along at a snappy pace. During the “daylight” hours, the girl with the ‘tude wanders about the town, killing zombie monsters milling about and collecting experience points and weaponry as she rescues villages. Come “night,” those milling enemies suddenly become a lot more aggressive and start bee-lining towards a central refuge in waves, which you need to protect, so there are two ways to get the “game over” screen here – dying, or allowing enemies to break through into the refuge.

In addition to fighting personally, you can also set traps, upgrade buildings, and recruit heroes to help in your fight. You’ll need to manage resources well, because they’re not always easy to come by, and the difficulty levels of this game can ramp up quite rapidly. Survive one night, and the next day begins – the process starts anew.
That’s all there is to this game, really, and that’s problem number one; it gets repetitive fast. Sure there’s some character customisation and the challenge will keep you on your toes, but The Dust is an immensely limited experience. To make matters worse, it only really lasts seven days and seven nights, then the game comes to its natural conclusion, and there’s not a great many reasons to play it through again. 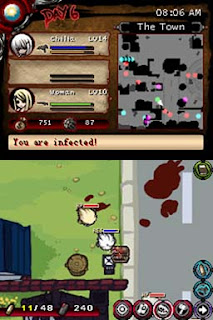 Problem number two is the aesthetics. This is the kind of game that should be creepy. The music does a reasonable job of setting things up, and the premise is not so far from those B-grade horror zombie films that are so much fun to watch, but the game plays from a top-down perspective. That means for the entire game all you see is the tops of your character head, attacking the top of the enemy’s heads. Circle vs. circle is not an exciting or creepy design choice – this is why the industry moved to isometric perspectives a long time ago.

There’s also some irritating bugs to deal with. Pathfinding is terrible – enemies and characters routinely get stuck on walls and debris, and collision detection is wonky at best of times. Smashing those pots never happens on the first attempt.

There’s a lot to like about the game – it’s simple fun, but it’s addictive, and the mixing of tower defence elements with action RPG is an inspired – if safe – path to take. It’s just a pity that the end result is a game of missed opportunities. Hopefully a sequel can take better advantage of the opportunities this game gave itself, and perhaps on 3DS (or iPhone/ iPad) the game can make use of the softer platform restrictions to build a better fleshed out experience.