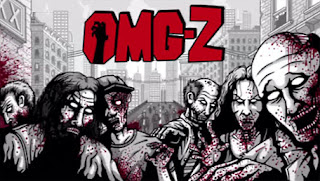 It’s about time zombies are put to rest. They’re no longer frightening, funny or original; more importantly, they’re no longer interesting. They’ve been shoehorned into every genre known to mankind, and while they often still work, it’s at the point now where if I see “zombie” in the title I’m rarely going to bother with the game.

OMG-Z is a zombie game. I’m glad I found an excuse to play it (this review), because it’s quite good fun, and the zombies even suit the theme without feeling unnecessarily forced, but it was still a sour taste to deal with in that crucial first impression stage.

Essentially, this is a remixed version of Chillingo’s Sneezies. The screen is packed with a horde of zombies who able around in random directions. By killing one, it damages other zombies nearby it, and the goal is to use this chain reaction to kill as many zombies in one go as possible, which gives you a high score.

There are a few different zombie types, and these “die” in different ways. Some explode, others melt into toxic goo, still others fire off a bullet when killed. Each of these “deaths” affects surrounding zombies in different ways, so it’s important to have a good grasp of timing and patience to line up the best shots. Regardless of how they die, however, they die spectacularly, with showers of gore and disgusting ooze. It’s visually impressive, and dare I say thrilling to get a really high chain kill and see all the body parts fly all over the screen. It’s not often than a PlayStation Mini game genuinely deserves an M rating, so kudos to the developers for managing to make ultraviolence work with such a small download.

There’s also money to be earned by doing well at levels, and upgrades to be bought. These make no sense whatsoever – you can use money to buy more zombies on later levels, for instance (yes because more zombies is exactly what you want in the event of an apocalypse) – but it does a good job in keeping you interested and working to more upgrades.

There’s a branching level tree, too. Just scrape through a level and you’ll only be able to progress on the “easy” path. Do really well consistently and you’ll unlock the very final level. All up this game features a lot of levels, and though you’ll be doing the same thing in each of them, at least there’s something new to look at constantly being thrown your way. 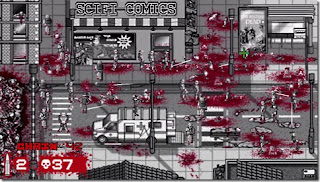 What lets OMG-Z down is the lack of online leaderboards (this kind of game is perfect for score attack), and a crippling lack of variety. It’s a Mini in the truest sense, and it’s not a game you’ll keep coming back to.

But it was fun to play, so if you’re not completely over zombies yet, OMG-Z is a safe (and cheap) purchase.

PC board game, Bronze, to get tabletop release

Frozen Synapse demo; there’s no excuse not to play this game now