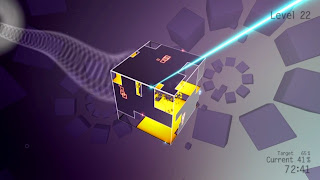 Taking classic game design and trying to make it jive in 3D has always been fraught with danger. For every Mario 64 which successfully makes the jump are franchises that have really struggled with the extra dimension, such as Sonic and Castlevania games.

But most appropriately for this review is Tetrisphere, a Nintendo 64 game that wasn’t actually that bad, but didn’t provide an experience nearly as addictive as the original Tetris, and subsequent games have moved back to the basics. It’s appropriate for this review because Cubixx is the game Tetrisphere should have been. It takes a classic and very basic puzzle game, Qix, and turns it into a pulsating, addictive action-heavy test of the reflexes. There’s not much puzzling involved any more, but Cubixx is breathtaking nonetheless.

In short, each level of Cubixx features six regular Qix stages, stiched together into a cube. The goal of the game remains the same (cut a line across the faces of the cube to remove a set amount), and the enemies remain the much the same. On each face of the square is a randomly moving enemy that is death to touch. Around the lines of the cube and the cuts you’ve made across the cube sparks patrol. If they bump into your icon avatar it’s the loss of a life. There’s a couple of extra enemies floating around that are relatively unique for this kind of game, such as pools of blackness that slow movement and make it consequently easier to get caught, but taken in isolation each face of a Cubixx puzzle is a very traditional game.

It’s in the multiple cube faces that Cubixx provides something fresh and original. In terms of getting high scores, cutting into multiple faces of the cube in one pass provides the multiplier, and because the speed of the game speeds along at a good clip, it quickly becomes an arcade title of the highest order. The harder levels, especially, require highly tuned reflexes.

There’s plenty of levels, and plenty of ways to play each of those level. The difficulty curve is reasonable, though every fifth level (upon completion of which yield the in-game rewards) is substantially difficult. Five levels is too short of a gap between what amounts to boss battles, meaning the difficulty feels at times artificially inflated, but it’s a small complaint in the broad scheme of things.

Once those 50 or so levels are completed, the only incentive to come back for more is just to better the high scores, but thankfully online leaderboards make this a worthwhile pursuit. It helps too that the visuals and music are effective, providing an environment that keeps enticing you back for more. The deep electronic beats and strong, basic colour palette equal an uncluttered but vibrant environment.

It’s also worth noting that yes, this is an updated version of Cubixx available already on the PSN Minis. Naturally though, it looks better in HD, and critically it now features four player split screen multiplayer. I don’t know anyone that has four PS3 controllers lying around, but it’s great to see the occasional game still support split screen, local multiplayer. That doesn’t happen often enough any more.

Cubixx is the perfect downloadable title. Though a small download (it’s only around 150MB), the game is addictive and wraps effective visuals and music with a progressive gameplay concept. This might just be an evolved version of Qix, but wow is it also a ride.