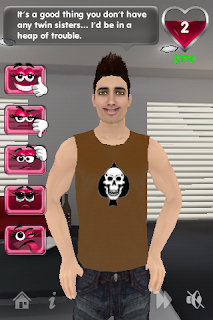 Look, here’s a game we’re not going to review, but some of you might be interested (there’s a lite version to try before you buy); WET Productions has released a virtual dating sim starring such hunks as the fellow on the right.

My Virtual Boyfriend features 20 levels of progressive game play an a “unique dating system that picks guys that match your tastes.” You’ll get to interact with these virtual masculine hero via gesture, action, activities… and touch.

Awesome. We especially liked the bit where the press release tells us that “personalities mirror typical and often funny male behaviours.”

And a quite the press release tells us just how passionate Mike Amerson, president of WET Productions is about the game: “We have one guy in there- the alpha male, He’s a bit of a d-bag. Always controlling and only giving backhanded compliments when he’s at his best behavior. We also countered his type with a “nice guy”, for the ladies who complain that all the nice guys are taken. You know the type of guy who reads off lines from poems, always agreeable and compliments way too often? That’s him. There is also the Urban male, the Metrosexual and even a Geek. Every lady is familiar with one of these types of guys at some time in her life and will chuckle a bit when she plays the game as she can identify with them.”

I must admit, that’s probably the most entertaining canned quote I’ve seen in a press release so far.

For guys looking for the virtual girlfriend experience, WET Productions has My Virtual Girlfriend available too. We’re sceptical about all this, but for those who don’t have the time to learn Japanese and import Love Plus (a genuinely good game), here’s a iOS alternative. It’s only $0.99