Collectibles and other non-game mechandise is one of the major selling points retailers have to capitalise on with customers; because after all, while you can download a game, you can’t download a character miniature.

Except Ubisoft just snubbed the retailers.

Ubisoft has just launched Ubicollectables, a series of miniatures and premium products… that will only be available through the online UbiShop.

“The first UbiCollectibles are inspired by fans of the Assassin’s Creed®, Might & Magic® Heroes® and Tom Clancy’s Ghost Recon franchises. More than 29 million people have purchased an Assassin’s Creed video game, and now a fortunate 2,000 will have the chance to buy a highly detailed, hand-crafted statuette called “Ezio’s Fury.” The figurine shows Ezio in a combative stance as he moves in for the kill.

In Might & Magic® Heroes VI, Michael, the legendary Archangel, is one of the most charismatic characters, and 500 fans will now have the opportunity to own an intricate polyresin figurine of Michael, wings spread and sword drawn for battle. UbiCollectibles is using a design chosen with fans on Facebook to create this unique offering.

From Ghost Recon, a limited quantity of “Production Team” t-shirts, with the same design as those worn by the development team during this year’s Electronic Entertainment Expo, will be available as UbiCollectibles.” 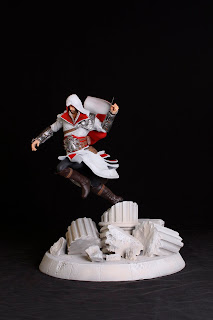 And now we may have just seen how games publishers will deal with preorder bonuses and collectibles as the games industry moves ever closer to a digital distribution sales model.

Or western publishers could take a leaf from the likes of Square Enix in Japan and launch their own retail shops with character goods for the fans. Preferably in Sydney.

Discuss this on our forum