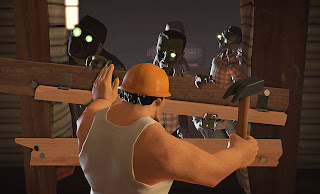 Breaking news: Zombies are a popular theme for developers to base their game around. Some might even say it’s clutch for them to garner attention at this point because we writers sure appreciate the opportunity to point out how tired it is. Now, I’m not the biggest fan of zombie games but I do enjoy them (as much as any other game for that matter) if they bring something fresh/new/interesting to the table. That is not the case with Dead Block.

I have played through the whole campaign, which took me little more than two hours. Being a sucker for the instant gratification of cheap trophies, I wanted to go back and finish picking up the rest of the prises but I just can’t bring myself to fire up the game again. That’s saying a lot especially when considering I have the platinum for UP! 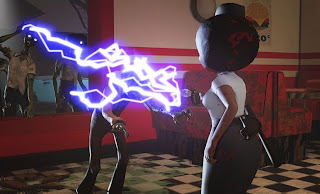 At first, Dead Block seems to be an attempt to make a third-person-action-tower-defense-game. If you consider mashing a button to chop up furniture or solving cheap mini-games to be exhilarating then I guess the game will give you some satisfaction. These actions you use to gather material to build your traps and barricades in windows and doorways. The tower defense aspect is the only thing remotely interesting about the gameplay mechanics, but it is ruined by the aforementioned gathering of materials and a horrible upgrade system in which you only get to use all of your traps in the last level of the game. The traps have varying functions like completely blocking a doorway, dealing one-off or ongoing damage, gathering zombies together to blow them up, making them attack each other, etc. There is something interesting there but the whole concept of the game is executed poorly.

It possibly would have done the game some favours if you had no means of defending yourself aside from the traps and perhaps scrapping the whole third person aspect all together. The characters control horribly and the camera is full of jank. The game takes place inside buildings where a shoddy camera in tight spaces can be a source of great frustration. When switching between the game’s three characters you sometimes find yourself severely disoriented and unfortunately there’s no button to politely ask the zombies to hold on while you get your bearings. 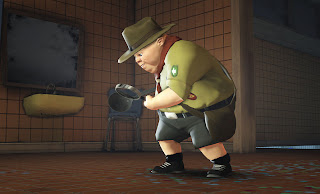 Dead Block tries to be funny and stylish with its fifties rockabilly sensibilities but it simply doesn’t work. The art style is very generic and it never managed to bring a smile to my face. The three characters are boring stereo-types representing the burly construction worker, the fat kid from UP! and Foxy Brown. Not very original and indicative of the game’s overall style.

I can see no reason to recommend Dead Block to anyone unless you have a clinical fetish for zombie games. There are plenty of zombie games and tower defense games out there and almost all of them do their respective jobs better than Dead Block. Unfortunately, you can probably go on PSN or XBL and pick any game that seems remotely similar and be sure of it being better than this game.