Chess has become an incredibly difficult kind of game to build into a compelling purchase. There are literally hundreds of great chess offerings out there, each with different value propositions, ranging from flashy battle chess visuals through to hardcore AI simulations that Elo ratings (the statistic assessing a person/ game’s skill level) providing a challenge greater than scaling Everest.

With that in mind, Cohort Chess is going to be forgotten very quickly. It’s not that it plays a bad game of chess. It’s just that it’s a limited package that does nothing original. 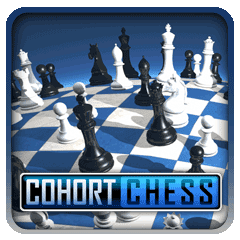 There’s two ways to play – there’s chess, and puzzles. Chess does as it says on the box, with six different computer opponents to play against, and a reasonable difficulty curve.

The game’s interface is nice and clean, though it’s a little irritating that the game shows all the possible moves for a piece, as well as highlighting the pieces that are threatened by the opponent. This is good for beginners to chess, but more experienced players would have appreciated an option to turn the guide off.

More positively, the game’s AI manages to think quite quickly. It does mean that the moves are a little predictable – openings are straight out of the ‘Chess 101’ textbook, for instance, and as a result quite beatable for experienced chess players. On the higher difficulty levels, expect mistakes to be punished.

The puzzle mode provides a range of scenarios to complete within a certain number of turns with a handful of pieces. Those puzzles are sometimes quite interesting and thought provoking, and will certainly help a beginner master the way each of the chess pieces work.

The problem is that that’s all there is to the package. Once you’ve defeated all six opponents with both black and white sides, and completed the puzzles, there’s not much that will have you coming back for more. The highly predictable nature of the (fast) AI will suit some, but as a simulator of one of the most complex board games of all time, Cohort Chess is not going to appeal to anyone but the most casual of chess fans (and even then the last of online play will probably put them off).

Discuss chess on our forums