We found Akane the Kunoichi to be one of the best Xbox Live Indie Games thus far, delivering tons of ninja action. However, the boss battles can be rather tricky when collecting the kimonos, so we’ve created a guide that will help you rescue Master Goro from Hiromi’s clutches.

Akamatsu Plains
Suggested Hearts: 1-4
As soon as the stage begins, the troll will start chasing you, demolishing everything in his path. Avoiding him is relatively easy, but if you’re kimono hunting, you may take a few hits along the way. Even so, the actual fight is a walk in the park (or a run through the plains). To attack him, jump onto the highest platform on either side of the arena and toss as many kunai as possible. Once the troll shows up, jump over his head. Rinse and repeat. 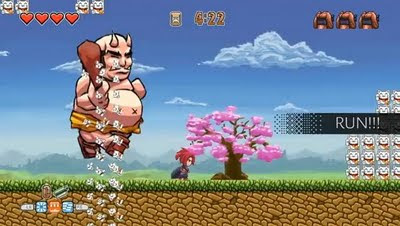 Suggested Hearts: 2-3 Minimum
Although he poses more of a threat than the troll, he’s still not the greatest fighter. The key to this battle is to stay close to him until he’s about to swing the katana, and then move slightly out of the way. Immediately jump and toss some kunai at his face. When you two are coming close to a wall, it’s time to wall jump up to the high platform and quickly drop down to the opposite side. He takes more of a beating that the troll though, so try not to slip up.
Suggested Hearts: 3-4 Minimum
The raccoon himself isn’t particularly challenging, but the constant water pressure and falling stalactites make this battle a decent challenge. When he jumps up in the air, get out from under him and move to the opposite side of the stage. Dodge the falling stalactites and fire those kunai until he jumps again. Unlike previous fights, you don’t need to be in the air to hit the raccoon, so you only need jump when you’re fighting against the flow of water. 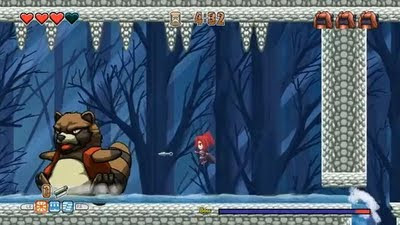 Northern Mountains
Suggested Hearts: 4 Minimum
He might be a floating head, but he’s no laughing matter. To start the fight, he’ll move left, so counter this by quickly heading to the right. Toss the kunai as you maneuver yourself away from him, making sure you’re far from his reach. When he starts using telepathy to throw his own kunai, stay calm and just slightly move the D-Pad in the opposite direction to dodge them. If you’re too close to a wall, cling to it, then follow up with a jump. Continue to use the strategy but make sure to avoid getting close to walls, as you’re more likely to get hit.
Hiromi’s Manor
Suggested Hearts: 2-3 Minimum
For a final boss fight, this bout isn’t all that difficult. Hiromi will immediately summon green ninjas, the weakest enemies in the game. Dispose of a few, then wall jump off the left side of the stage, tossing as many kunai at Hiromi as possible while in the air. During your descent, maneuver Akane so that she does not collide with the newly spawned enemy. After a few hits, she’ll start bringing out the dogs. They’re quicker than the green ninjas, but so long as you defeat all of them before going to the wall, you should be fine. After more hits, she’ll pull out the orange ninjas. These guys are the most dangerous of the bunch, so make sure to kill as many as possible before attempting the wall jump. Lastly, Hiromi will bring out old men who toss kasa. They aren’t very troublesome, but you’ll want to dispose of them for good measure.
Share this

Review: Bumblepig (while you wait for Halo 4… get this!)