One of our favourite PlayStation Minis is the retro-cool Pix’N Love Rush. The developers of that game, Pastagames, is back, with its new iPhone/ iPad title, Burn it All! due for release at the end of April. 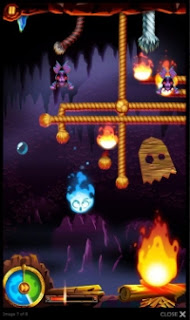 Burn it All! is a puzzler with over 100 levels. In the game you’ll control three different Flames as they make their way through the levels. Each has its own unique abilities – which sounds a great deal like the addictive team-work formula that made The Lost Vikings such an entertaining game back in the day.

The game will come with Facebook integration for high scores and achievements. Game Center is also supported for leaderboards.

In a release, ‘Nadim of Pastagames,’ said It is very different from Pix’n Love – Rush, but has that very same quality to it that players will flock back to again and again, going for the fastest times and unlocking the many levels and Achievements in the game. It is a simple and easy to get hooked on puzzle game that has a crazy twist half way through. You’ll have to bare and cooperate with yourself… Doesn’t really make sense now does it?! Try it out and have a blast!”