One of the better PSP Minis, History Egypt Engineering an Empire is headed to the iPad!

It’s already available on the iPhone as well, but the iPad, in glorious high resolution, should be a good fit for this “Civilization/ Heroes of Might and Magic Lite” style game.
It’s a game where you take control of an ancient middle eastern race, build up your cities and military, and then invade your opponents. It’s simple and straight forward, but it’s also really good fun. 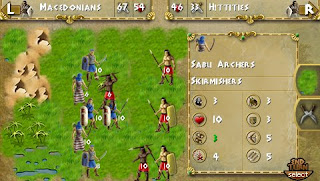 As we said in our review:
It’s the kind of game you’ll be playing into the wee hours if he morning. Typically you’ll start out outgunned, and it’ll take quite a time to build up the forces and cities needed to dominate the maps. Because the game flows at a brisk pace, however, so you won’t really notice the time fly by.
Share this