Hacking, Slashing and Laughing
Looting and killing for hours on end has been a staple in our gaming history for years on end, but never has it been so funny. An evil item known simply as The Artifact has been stolen by the evil Lord Von Prong and his evil henchmen, and it up DeathSpank, The Hero of the Downtrodden, to redeem The Artifact, and rid the world from evil once and for all.
With a name like DeathSpank, it’s quickly obvious that this is not an ordinary game at all. DeathSpank draws its main gameplay similarities from games like Diablo, or Champions of Norrath. Instead of the normal towns and dark corridors though, DeathSpank is full of vivid bright colours, and witty characters such as Farmer Bobblewood, and the Demon Witch Heybanstace, and not to mention the evil Lord Von Prong, who actually isn’t that evil, but instead is quite feminine, wears thongs, and enjoys opera music. Enemies such as the Kangamoos, or  half Kangaroo and half Cow, fill this wacky game, and are nowhere near the ordinary. DeathSpank takes the hack-and-slash genre into a realm unseen before, the realm of hack-and-slash comedy.
The story in DeathSpank is told in comic book styled cut scenes, and usually narrated by DeathSpank himself. DeathSpank is big and bulky, and tries to sound heroic, but it’s obvious from the start that he is indeed both big and bulky, but heroic, he is not. The voice acting is top notch from beginning to end, and not only is the voice acting phenomenal, but the writing in the game is hysterical throughout. Dialog trees with many of the in-game characters, can be straight to the point with accepting quests and receiving information, but there are often times when there is optional dialog that can be chosen as well. These optional dialog trees flesh out the characters, and are almost always full of hysterical, off-the-wall, slapstick humour found in few other games, especially in a genre such as this. An art style full of bright vivid colours take DeathSpank even further from the typical hack-and-slash game and everything together make for an experience that is unlike any other.
Gameplay is typical hack-and-slash: kill enemies, collect loot and equipment, and complete quest until the end credits roll, with a few giant bosses in between to spice things up. Experience gained to level up from quest completion and enemy kills allow DeathSpank to apply attribute bonuses to strengthen him for the stronger enemies ahead. Equipment looted can be equipped, and in turn can weaken elemental attacks, and improve maximum HP. Equipment can be selected to auto equip when acquired, minimalizing the need for constant swapping through menus, but new weapons acquired will need to equipped by the player. Weapons can have different elemental effects, and some even have special attack abilities, such as spinning attacks, that can be used when the justice meter is filled by defeating enemies.

DeathSpank can equip up to four weapons at once and the four face buttons on the controller attack with the different weapons. Special abilities can be unlocked throughout the game by equipping certain weapon types together, and attacking with both weapons together at once when the justice meter is full as well. Speaking of special attacks, items that can be picked up and equipped to the D-pad, for quick use, can be devastating, and one can even rain down a storm of fire from above devastating enemies all around. Potions and food to restore HP, and to negate status effects are found in abundance, but food restores HP over a short time period, and using in the heat of battle can be result in DeathSpank ending up spanked himself.

The world in which DeathSpank finds himself in is not only vivid and full of colour, as we’ve already previously mentioned, but it’s massive in size as well. Thankfully outhouses, yes the ones you poop in, are used for saving the game, and fast travelling around the world map. One thing that we find quite impressive is that the world can be travelled around on foot seamlessly without the need for transition screens. Only when fast travelling, or entering buildings and caves will there be an instance of a transition screen. Not only is the world itself huge, but DeathSpank has a massive amount of content for a downloadable game. There are tons of quest and side quest available, and full completion of the game will clock in around ten hours of gameplay.
A few problems do hamper this game, and the most notable of them is the weak blocking mechanic. When initiating a block a bubble forms around DeathSpank to negate the incoming attacks, but if it’s a physical attack that is blocked and then quickly countered, the enemy will usually still get a hit in on DeathSpank. There is no significant counter attack method here, and as a result use of crossbows for ranged attacks becomes the weapon of choice. Equipping a crossbow and shooting incoming enemies significantly reduces the number of physical attacks that need to be made, as well as utilizing the strafe and lock-on abilities. The lock-on ability has its issues as well in that it often times will lock-on to the wrong enemies, or items in the vicinity, and even though the right joystick can swap the target, it’s often easier to just release and repress the lock-on button, and fire away. Games in this genre usually suffer from repetition, and DeathSpank is no exception, but the wacky enemies and great dialog will have many doing “just one more quest” for hours on end. 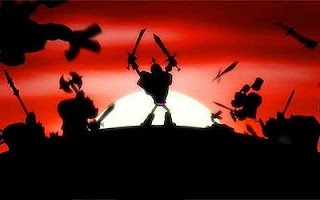 Packed to the brim with great one-liners and hysterical dialog trees, and looking unlike any other game in its genre, DeathSpank redefines what games in the hack-and-slash genre can be. Veterans of the genre will find a unique experience here, as well as being a great entry point for new gamers to the genre, but still offering a challenge for both. The question that remains is; can the strength be found to become the Hero of the Downtrodden? To save stolen orphans and lay the spank down on Kangaroos, and finally acquires the evil Artifact? DeathSpank is waiting!

Enjoy this review? Talk about this game, and others, on our forum by clicking here!
Share this