Arena and deathmatch FPS fans can look forward to the upcoming Nexuiz, which will be available on XBLA and PSN soon. 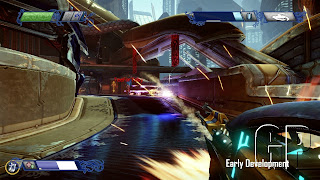 Powered by CryENGINE 3, Nexuiz had a good showing at the recent PAX convention.

The story, according to a recent press release:

Nexuiz is set in a galactic war fueled for centuries by the Kavussari and Forsellians. Over time the two races entered into treaties with the Herald Accord, a union between different cultures in the galaxy. Even though peace settled across their planets, the seething hatred between the races kept the fire of war simmering under the fragile truce. Sensing their newest members could spread war throughout the galaxy; the Herald Accord gave the Kavussari and Forsellians a choice. Pit their warriors against each other in the arena rather than on the fields of war, or face total annihilation. The Nexuiz was formed, a series of battle arenas on the home planets of the Kavussari, Forsellian and the desolate planet of Atavirta.

The game is due for a Winter launch – in Australia and New Zealand, that means Summer.

Will we get 3D games on a Nintendo 3DS virtual console?

Hybrid 2 a runaway success for GAMEVIL