“This is likely a huge turning point for the industry,” a guy on Twitter breathlessly enthuses, after it was revealed that MultiVersus has done quite well for itself at this early stage. Of course, it’s not uncommon for people to have breathlessly excited responses to games they kind of like after playing them for ten minutes. Spend enough time on Twitter and you will see just about every game with a decently big budget (and a lot of content) declared the Citizen Kane of Video Games™.

This one is particularly galling, though, because it’s about MultiVersus. Warner Bros.’ new and blatantly derivative clone of Smash Bros had better not be a turning point for this industry (though in saying all of this I suspect that despite my protests that guy is probably right and of course gaming will zig when it should have zagged). It’s free to play and contains a bunch of popular characters, so it’s hit 10 million downloads in “beta” stage, and apparently, all that a game needs to do now to become the new next Citizen Kane of Video Games™. It’s frustrating because that’s not how these things should work. If gaming was a medium worth respecting, “derivative and cynical,” would not be qualities we celebrate, even if they’re “free.”

MultiVersus is trash. It’s shallow, vapid, and instantly forgettable. If it wasn’t “free”, it would be rightfully torn a new one by just about everyone, as bad Smash Bros. clones have in the past. However, people apparently have so little respect for themselves and their limited time on the planet that they forget to put a value on their time in judging the cost of a “free” game, designed to become habit-forming and exploit endless hours out of people’s lives. Because, to be clear, that is how a game like this draws in a fortune. It turns “free” players into the product and ensures that as many of them as possible keep playing so that those “whales” – the ones paying for the “battle passes” – have an optimal time themselves while playing. What amazes me is that anyone would want to be a whale and pay for something that plays this poorly, but the perception of value is a hell of a drug in late-stage capitalism.

What a crappy mess of a game. #PS5Share, #MultiVersus pic.twitter.com/cnvIl2A8e1

I was curious about MultiVersus, so I did the right thing, downloaded it, and played a couple of games. This is an ugly, messy, cynical and nasty bit of work that doesn’t even try and hide the fact it’s a money-spinning content platform first and foremost, piece of entertainment second. And as for it being a work of art? Hah! No. That never crossed the mind of anyone working on this project.

The default way to play is 2 vs. 2 online, where you pick a character from Warner Bros. stable of characters and team up with someone to take on two opponents across a range of stages that are also based on Warner Bros’ properties. There is one interesting quality about this, in that by making the focus 2 vs. 2 there are some characters that have abilities that help their partner on the field, making for a more interesting and collaborative teamwork dynamic than most games of this genre feature. Aside from that, however, the developers have soullessly aped everything that made Smash Bros. the series that it is… just without any of the interest in producing an interesting game.

The action is much faster and more furious than Smash Bros. I suspect that’s an effort to hide how utterly dull most of the fighters and their movesets are. When you can barely follow the action because it’s so chaotic it hardly matters that, for just one example, the game developers took the incredible character of Shaggy from Scooby Do and made his most distinctive attack a… sandwich toss. He pulls a sandwich out of the ground and throws it at his opponents. Over in Smash Bros you’ve got a dozen of attacks for each character that is pure fan service and that really plays up their character, and here you’ve got one of the best cartoon characters ever playing shotput with a sandwich. Shaggy stopped being fun to play with after one match and that just should not happen with characters like this. Of course, the developers never cared one whit about doing the characters justice. They knew that they would hook players in by throwing a couple of currencies, level-up bars, daily missions, “rewards”, and season passes at them. Like with every free-to-play game, the menu screens outside of battle are a UI nightmare, designed to confound players by bamboozling them with so much information that it’s hard to piece through it. This is, of course, the plan, since the more you can overload the senses the less a person is likely to notice how shallow the underlying game is. But I noticed. Oh yes. MultiVersus is a shallow grind, that trades off any meaningful sense of reward for endless progression and carefully dolled out “rewards”, meaning that it is relying on the rush of dopamine to the system every bit as much as the gambling industry. And when was the last time anyone said that a poker machine was a Citizen Kane™?

It’s an ugly game, too. MultiVersus’ character models could be dragged and dropped into Fortnite, Dauntless, or any other mainstream free-to-play game. There seems to be an art school out there somewhere churning out graduates that are very good at producing “best practice” aesthetics for maximum player engagement. Picasso would have wept. There’s none of the vibrancy or apparent effort into the levels, either. The developers seem to have arbitrarily selected a Warner Bros. property, and stuck a generic “competitive and therefore fair” arena over the top. The entire level selection of MultiVersus is the equivalent of the boring 10 per cent of the Smash Bros levels. The reason you play Smash Bros is for the rest, where the developers decided to be interesting and appropriate to the source material, and weren’t overly concerned it the level was particularly viable for esports use.

Perhaps the most telling issue with the game is that it absolutely sucks in local multiplayer. The ability to do so is buried off to the side of the available play modes, as the developers clearly want you to overlook it. Once you’re in there, you’re incredibly limited in how you can play. There are no bots to fill out numbers and very few gameplay customisation options. I have fond memories of playing 60-minute epics of Smash Bros with a group of friends, and while that is an extreme option, being reduced to playing a 7-minute, four knock-out round with my wife, because that’s all MultiVersus allows, is just woeful. The reason there’s so little invested into this mode is obvious once you realise that all the characters are available immediately there, whereas with the main online mode you have to unlock them (using currency, real or “earned”). That is to say that there’s no way to monetise the local multiplayer. The developers put something in there because it was mandatory for this kind of fighting game, but it’s worthless for more than ten minutes of play, and deliberately so. 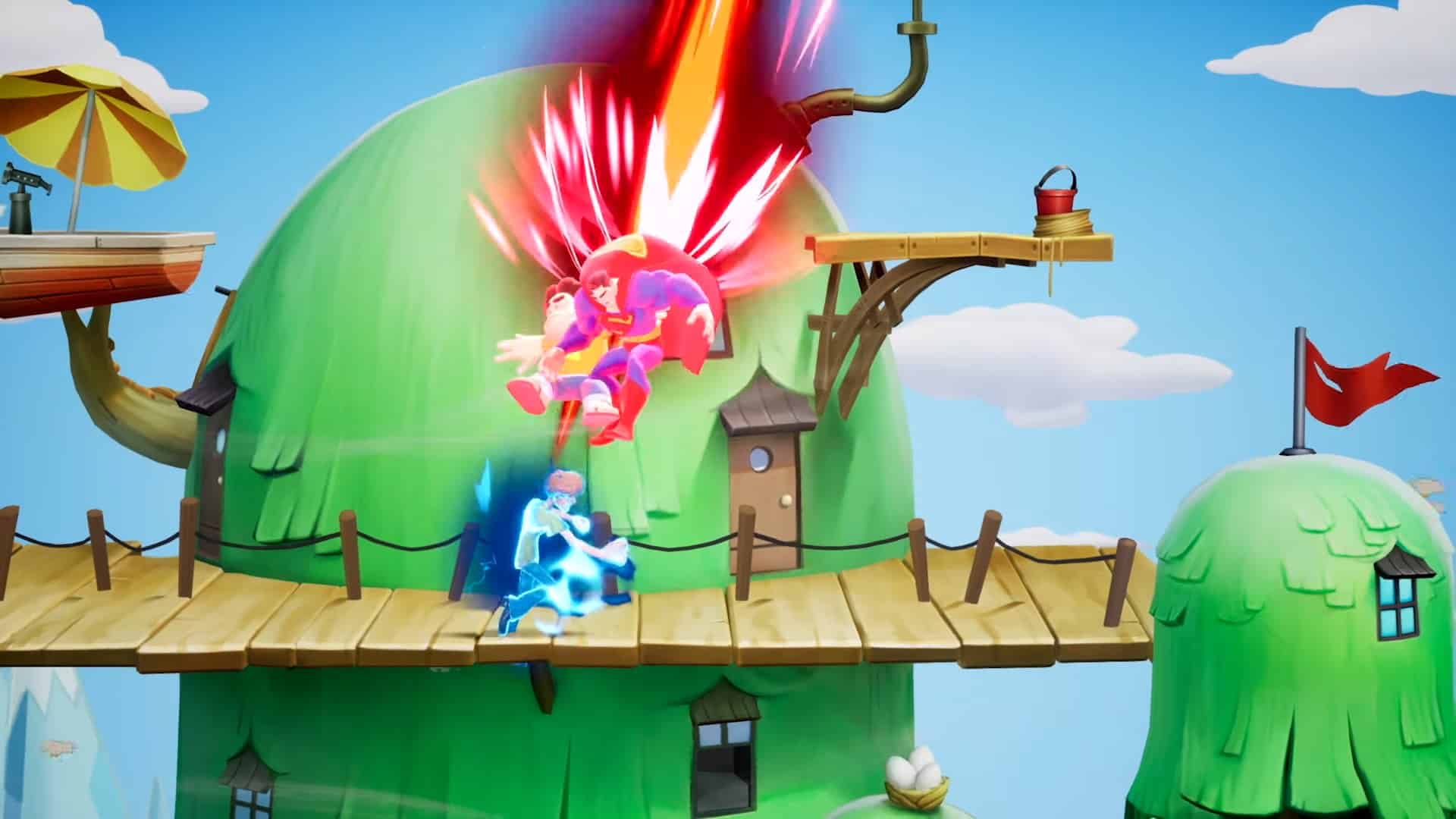 MultiVersus is, like every other free-to-play game, an opposite-direction ATM masquerading as an entertainment product. It’s going to continue to ask you for money as long as it’s popular, and in return, you’re going to have the pleasure of looking at a cynically assembled load of junk that relies on exploiting licenses rather than celebrating them. For some reason, there are other media outlets giving this game a review score, despite it being in “beta” form. I won’t, because even though the game is already taking money from those that it’s exploiting (which, to me, means it shouldn’t be considered a “beta”), I’m not going to change our editorial policy. I don’t see any way this game can be redeemed, however, and the consumers have already told the developer that they have the appropriately mindless love for the product that capitalism demands, so all that’s ever going to be done to this is to add more content. What a waste of time, money, and a potentially fun set of licenses for a multiplayer brawler. A complete waste.

I think it’s time for superheroes to put their feet…

SongPop Party is, without a shadow of a doubt, one…