It's unfortunate that this d***head has to be on the cover.

I’ve yet to lose a match in Matchpoint Tennis, and that’s the game’s one substantial flaw. Unfortunately, that one issue effectively ruins it. What’s the point of a sports game that is so lacking in difficulty that there’s no risk of a loss? The entire genre is meant to be about getting your hands to sweat up and focus on that desperate scramble for victory, and Matchpoint lacks that entirely.

The first match I played in Matchpoint Tennis was at “normal” difficulty, and when that was a 6-0, 6-0 cakewalk I decided I should bump it up to the highest difficulty. Then I was winning 6-1s and 6-2s. In fact, I don’t think a single set has been worse for me than a 6-3 result. This is despite my character’s career stats being scored around the 30’s at the start of the game’s career mode, and the opponents in the semis and finals being around the 70’s and 80’s. It’s only going to get easier as I enter my career’s third and beyond years, and I’m already so solidly #1 I’m going to give Serena Williams a run as the GOAT. I’m not exaggerating on any level here; either the game is just that easy or I’ve somehow lucked into being a savant with it. Either way, the utter predictability of each match means that I can only play a match or two at a time before I need to go play something with slightly higher stakes, just to remained me that it’s not my talents making this so easy, but rather the game’s flaws.

The thing is, though, the mechanics of the game are excellent, and Matchpoint Tennis does reward playing the sport with the tactics the real players use. You get a greater reward by playing the angles and letting the ball drop a bit shorter but wider in the court than simply blasting for the baseline all day long. If you’re pulled out of position you’ll need to make good use of the slice to slow play down and let you get back into the court. The volley game is hard thanks to the weight that the opponent hits the ball in modern tennis, but if you can get to net, you’re probably in a dominant position for the point. Matchpoint Tennis is a fast take on the sport, but mechanically it comes across as a very authentic one. 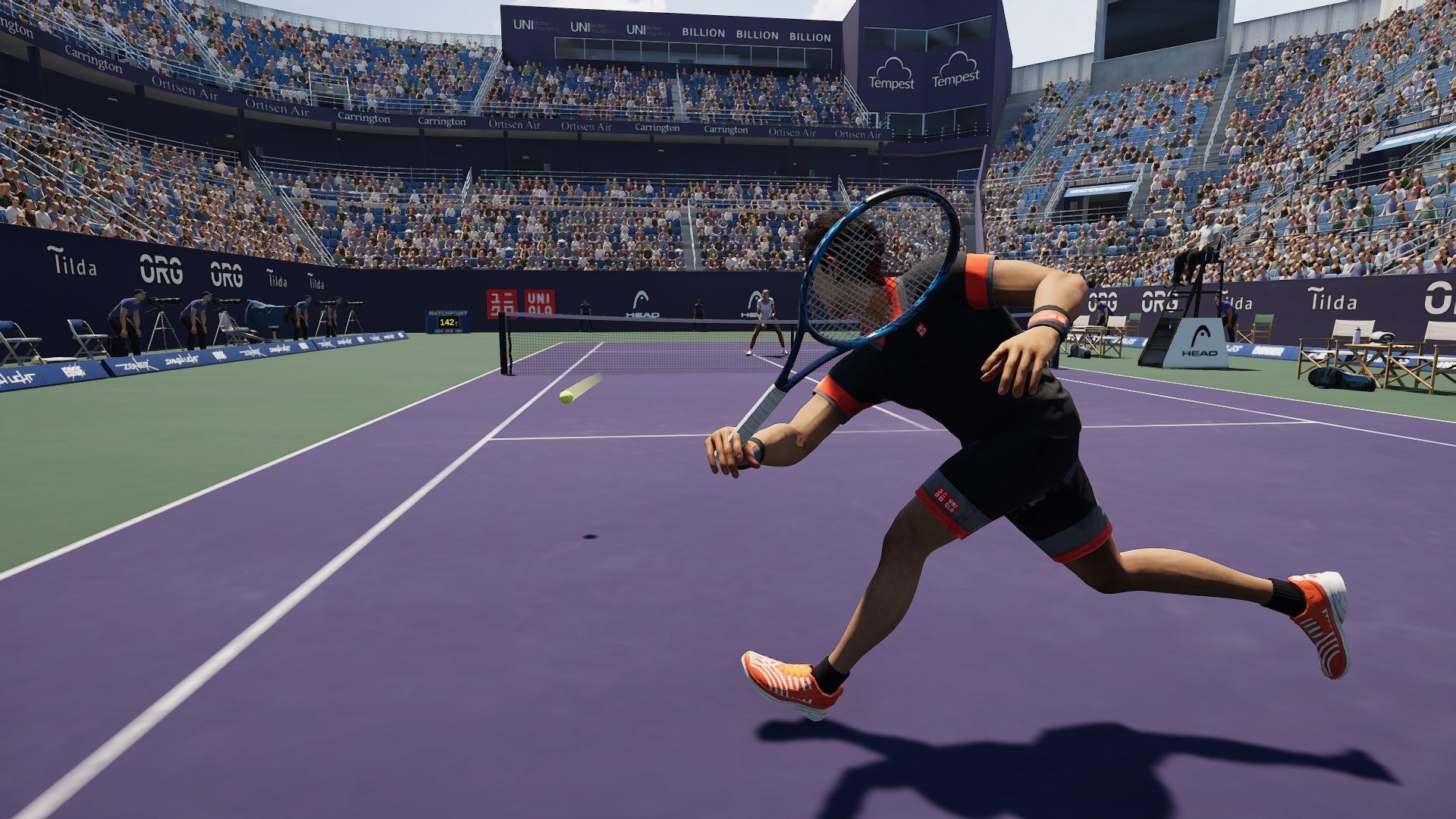 The little details are nice to see, too. Movement across the court feels better than in other recent tennis games, because the developers seem to have understood the weight and dynamics involved in the split position stance that tennis players take before hitting the ball. It could still be more – from my own days playing tennis I still feel like players “float” on the screen a little too much – but I was setting a tennis game actually play out on the screen, rather than an abstraction of the sport, and that was nice.

The AI’s not terrible, either. Again with reference to other recent tennis games, in Matchpoint Tennis it does seem like they’ll vary shot type, placement, and behaviour, and not just at random moments for arbitrary “variety”. There are some foibles, with the AI being a little too easy to drag into the net and then pass, but coupled with a really neat system where AI opponents all have unique strengths and weaknesses (and you’re not necessarily aware of them at first, you’ll need to “discover” them over the course of a match), Matchpoint Tennis is the first time in quite some time where I’ve felt like my opponents in tournaments were something more than an endless sequence of dull walls. If it was just a little more challenging I would have been genuinely invested in each and every match.

So, if the mechanics are sound and the AI isn’t terrible, just what is it about Matchpoint that makes it too easy? It’s two things. Firstly, it’s far (far) to aim with precision. Though the pace of the game is fast, you still have more than enough time to move the little aiming dot to make use of almost any part of the court with every shot. The only exception is when you’ve been put on the run, but even there, a slice or lob or two and you’ll be back in a position to start controlling the point. However, it’s the second issue where the problem really lies – it is far too easy to hit at full power with every shot. There needs to be a trade-off for playing high-risk play with angles and court lines. Either you hit with lower accuracy and end up with a greater tally of unforced errors, or you hit with less power and risk giving your opponent an easy shot. In real tennis, the number of times you’re going to be able to whip a shot wide and at the same pace that you might hit the ball safely into the middle of the court is incredibly rare, but in Matchpoint Tennis it’s the norm, and once you’ve mastered that the otherwise competent AI has no hope of keeping up. 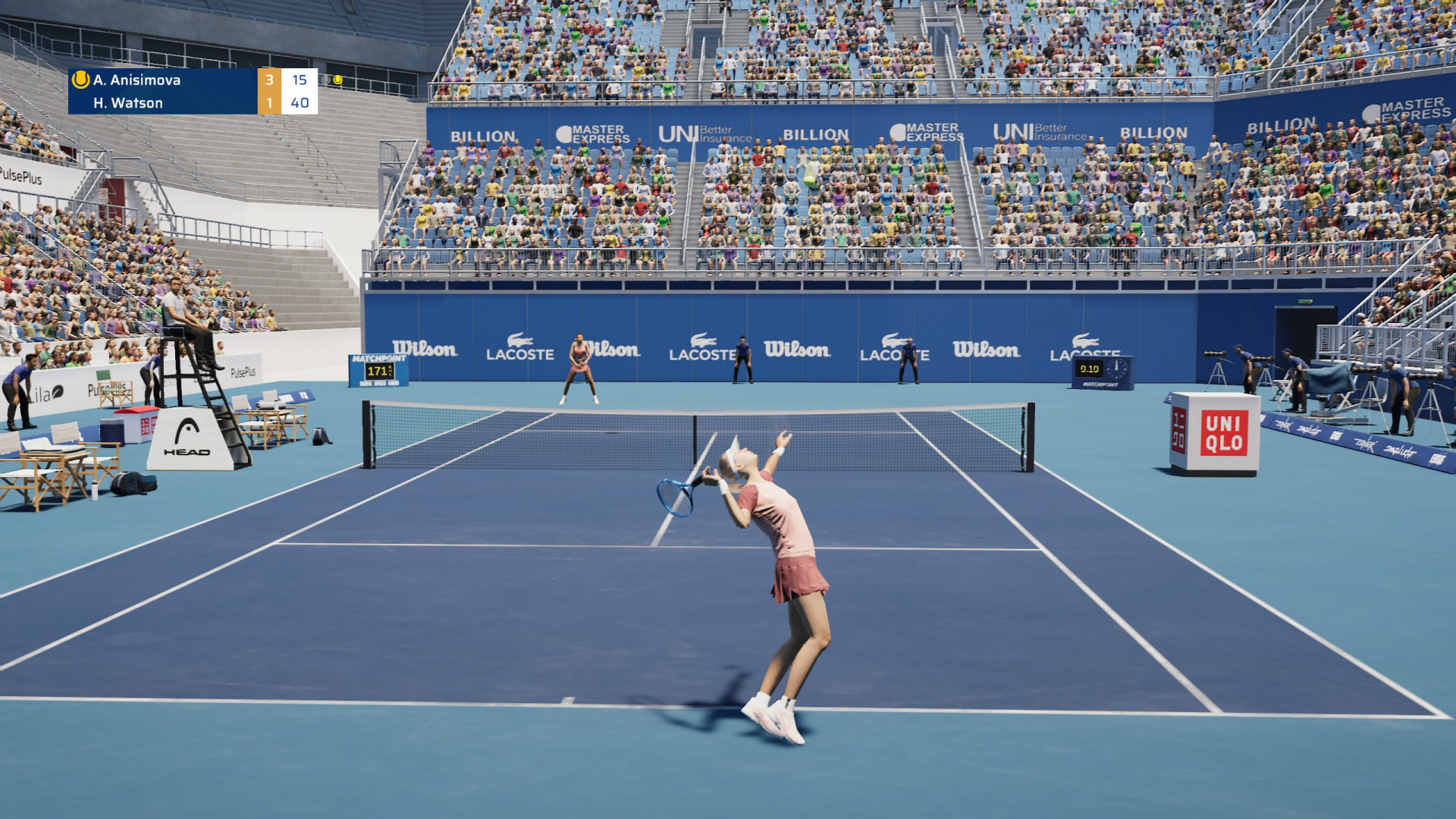 Off the court, Matchpoint Tennis was clearly produced with a tiny budget. There’s only a career mode and casual (and online) play options, and the career mode is just an endless sequence of matches. There’s no narrative, no reputation systems, no simulation-like player management. The only decision you’ll ever need to make is those times there are two different competitions on the calendar that clash and you need to choose one (though you’re always going to choose the higher ranking tournament since you’re always going to win it and bank more points).

You do unlock additional gear and coaches, but all they do is provide minor stats boosts. It’s a dull career mode, frankly, and while I’m not personally bothered by the lack of superficial presentational elements like trophy ceremonies, I do expect career mode to feature something off-court that makes it more than an endless series of casual matches. That being said, when it comes to micro-budget sports titles I would rather see the effort go into the core mechanics than anything else, and the developers have, in fairness, produced a game that plays as though it’s punching well beyond its budget.

That being said, if Matchpoint Tennis had just thrown the occasional loss at me, or even let me fight back from behind at times, I would have spent so much more time playing the game. It’s unfortunate to think that here we have a tennis game that developers should be paying close attention to, because it gets so much right, and we know that won’t happen because one critical error means I have no choice but to score it the way I have. If, down the track, there’s a patch to improve the difficulty in an interesting way, then Matchpoint would be the best tennis game currently available, purely because the on-court gameplay actually gets it.

Podcast-in-Video: Blockbuster JRPGs – Do we need them?