Google it, mate (you have to be Australian to know what this is so funny right now)

A game… where you might learn something?!?! Perish the thought! That is what Chinatown Detective Agency is, though. It’s inspired by the classic Carmen Sandiago (the only game we were allowed to play on school computers when I was in primary school), and it’s a puzzle-based adventure game where the puzzles are, effectively, trivia and require you to do research in the really-real world to solve. Unlike Carmen Sandiago’s all-ages approach, this one is a mature cyber noir thing, but otherwise, they are equivalent, and Chinatown Detective Agency is excellent.

The tutorial starts things off nice and easy. The first real puzzle starts with you tracking down a book that a suspect might have used. Unfortunately, all you have is a line from that book: “Of all men’s miseries, the bitterest is this: to know so much and to have control over nothing.” Now, if you don’t know the answer off the top of your head (you really should, but I find that people are less familiar with ancient Greek historians than they should be), then what you’ll discover quickly is that the answer’s not actually in the game. Anywhere. Instead, you’re going to have to pull your phone or computer out and get with the Google searching. Then you’ll be able to work out which book the quote is from. From there you’ll follow a trail of breadcrumbs to eventually solve a cypher, which in turn will tell you that you need to fly somewhere. You’ve got the town name, but not the country so, again, unless you know it off the top of your head, you’re going to need to Google search. And this sets the tone for much of the rest of the game.

The tutorial’s solutions are just a single Google search away, but more complex puzzles require some pretty smart desktop research skills. I’ve got to admit that I might be one of the few people that relishes the thought of that, but I do genuinely like using Google to do preliminary research and follow trails of information to learn things. Knowing how to work with keywords and follow links is a skill I enjoy putting to use, and while Chinatown Detective Agency isn’t going to train you in the skill to the point that you add it to your resume, the harder puzzles will nonetheless test you for your ability to track down symbols of antiquity, and quickly learn where a cultural or historical quick comes from. All along, you’ll also be learning things too, whether it be the names of authors, locations around the world, or their histories. “Edutainment” usually means absolutely terrible “games” that really just dump information on you in a slightly interactive manner, but Chinatown Detective Agency definitely qualifies there, and the more adult focus it has over Carmen Sandiago makes it more interesting to me, an adult. 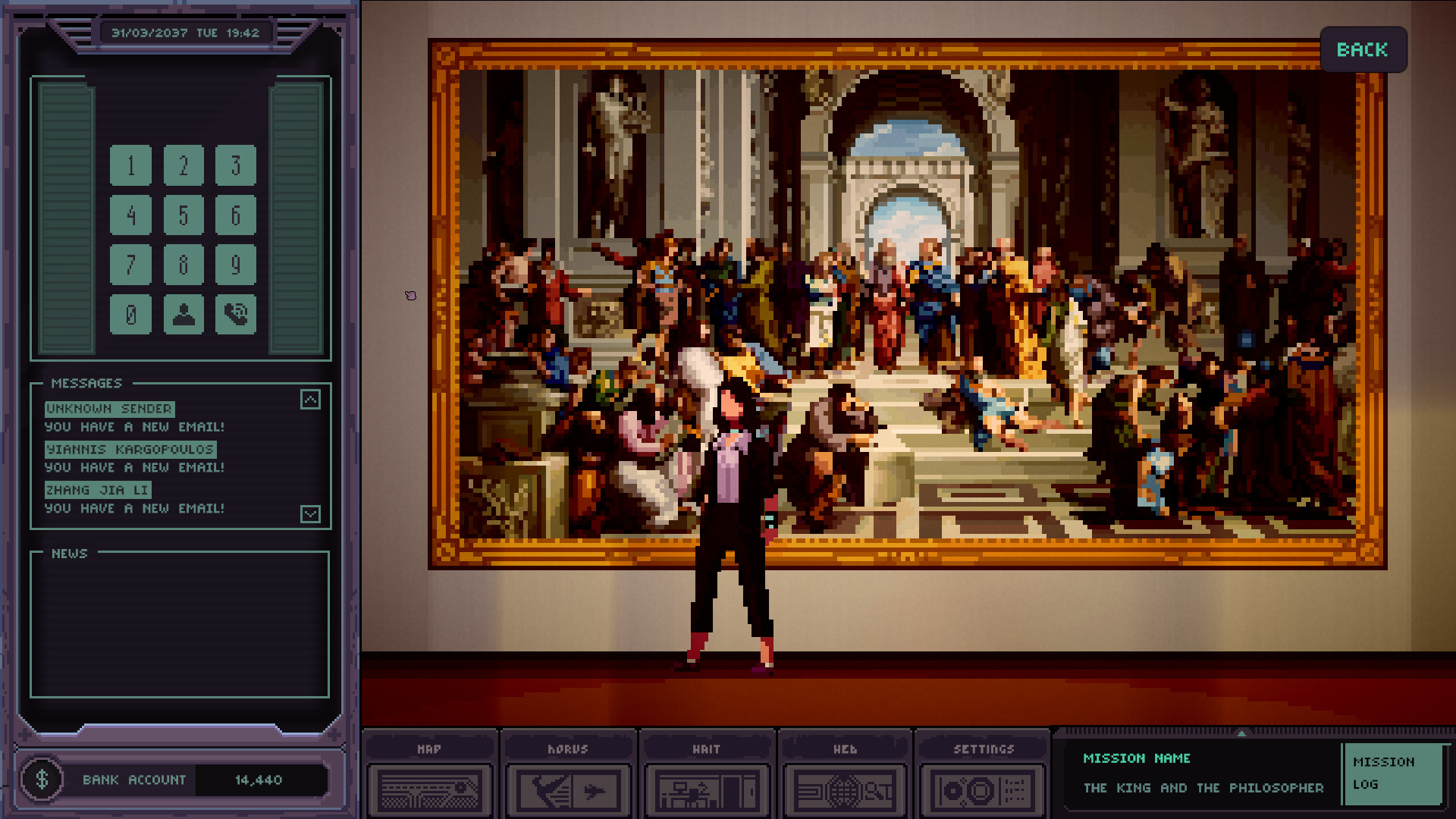 That’s not to say it’s not a good game in its own right. The future noir narrative is handled well, hitting the right notes that you would expect it to, though it’s let down by some pedestrian voice acting. Performances are so incredibly important to selling the moral conflict and decay in noir, so it’s disappointing that they let down an otherwise page-turner script, which does a good job of positioning Chandler-esque pulp in a futuristic setting.

The game itself is largely about racing against time. Time ticks on in Chinatown Detective Agency and there are deadlines for getting things done that, if you miss them, mean that you’ll miss a flight that you really needed to be on, or not have enough money to pay the bills that month. It’s doing the research that will potentially drain your time, and the developers wanted to create that tension; it’s impossible to save mid-case, so you can’t cheat yourself by getting the clue, closing the game down and then taking your time to solve it. You’ll also need to complete cases as quickly as possible, as you need the money from them to keep the agency afloat. You can even hire people to help you out if you want, though the game doesn’t do quite enough with the money side of things to really sell it as a mechanic. It would have been great to access a broader range of help and expand the agency in interesting ways. Perhaps a sequel might do just that.

The pixel art, meanwhile, is spot-on for the point-and-click antics. Environments are evocative of a dystopian future, but at the same time, not quite cyberpunk. The tech level’s too low for cyberpunk. Instead what you get is the shadows – literal and metaphoric – of a world in moral decline, and while it’s neo-noir rather than classical noir (no Venetian blinds, basically), Chinatown Detective Agency’s jet setting global antics pack a heck of a punch. This is a game where realistic aesthetics would have been to its detriment because the impact’s as much about what is imagined as it is what is seen. 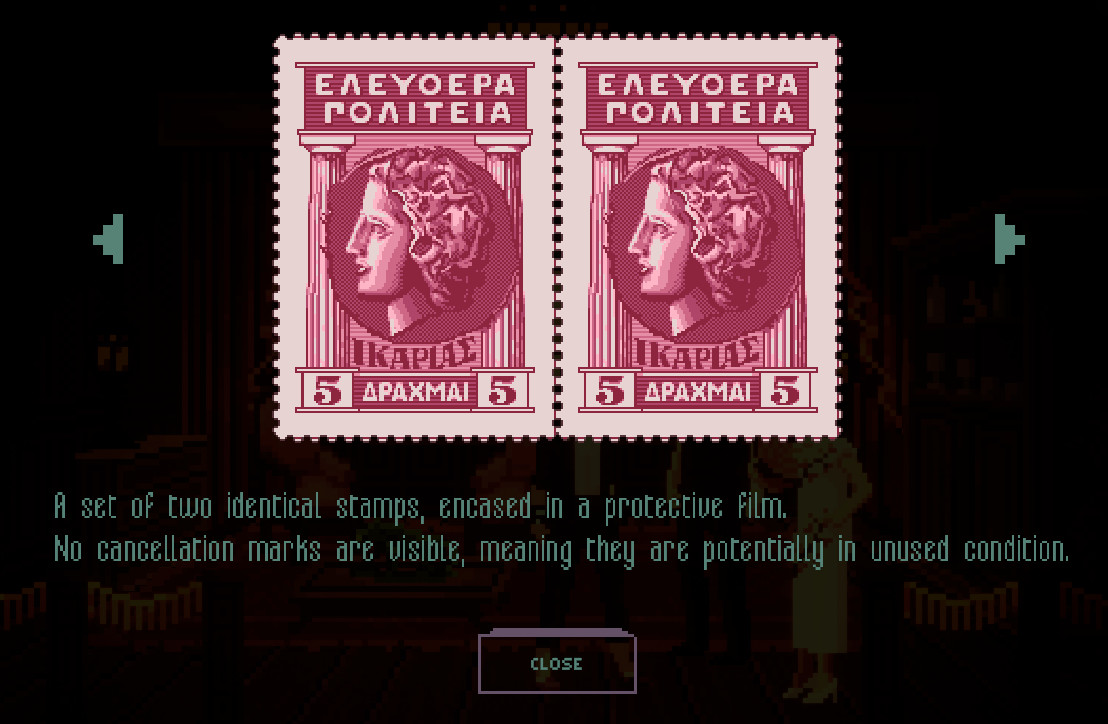 My only issue with the game is that it was clearly built for PCs, and the interface is annoying on console. There are two different “menus” to work from, they both need to be accessed from the main gameplay screen, and different buttons bring them up. It results in unnecessary busywork for something so simple. Likewise, given the frequency that you need to type things in, the virtual keyboard can be a pain, though there’s nothing that can be really done about that on Switch. These issues don’t impede progress or make the game more difficult. They’re just annoyances. Nonetheless, they are annoying and a better console port would have been appreciated. I should also note that I’ve seen others reporting some pretty large bugs. I’ve been fortunate in that I’ve had a couple of small audio issues, but none of the massive visual glitches and other weird things. I’ve not seen anyone say that their game has been broken from these issues, but they do seem to be big enough to be a detriment where they occur.

No doubt the audience for Chinatown Detective Agency is small. Modern video games spoon feed everything to players, so I can only imagine how counterintuitive it will seem to many to have a game that’s actively telling them to Google It, Mate and is willing to leave them high-and-dry with only vague clues. This is a game for people that genuinely enjoy researching stuff, and niche as that is, I have to believe that there’s a space in the market for it. Otherwise, “where’s the curiosity gone?” becomes a very real and sad question that we need to ask about our society and the entertainment that we consume.