Fingun is a straightforward, sexy shoot ‘em up with a distinct, bright pixel art look to it that brings a smile to your face in otherwise dark times. It’s also a subtle but striking commentary on the way love is increasingly commodified, ultimately undermining the human connection.

Now, I want to be clear: I don’t think the developer’s intended this tension. So viewing this through the lens of auteur theory, where we take the intention of the artiste as central to the work of art, my interpretation is simply wrong. After all, auteur theory implies that there is an objective fact of the matter, a true meaning of any piece of art. On the flip side, the ‘death of the author’ implies a more liberal stance, which in its most extreme form results in pure subjectivism: ‘beauty is in the eye of the beholder’. In reality, meaning is neither subjective nor objective: it emerges in the meeting point of mind and world. The state of the world itself is of course woven by all processes of all that is alive and isn’t, and the same goes for the mind: continuously ‘becoming’ through the interplay between itself and the environment. Because of this, the meaning of art is really the meaning of the art-engaging situation itself. This situation is constructed by the piece, the surrounding sociomaterial environment it is situated in (such as how and where it is presented, but also how others respond and have responded to it), and our own historically constructed selves. It is in this environmentally situated dance between beholder and art that beauty emerges into existence. It is in this situation that the duality of Fingun rears its head.

Fingun is a quirky and sexy boss-rush shoot ‘em up with an incredibly vibrant, unique, jolly pixel art aesthetic. It is reminiscent of Sexy Parodius, the classic sexy parody shmup by Konami, but, save perhaps the milk-jug-shaped bullets it doesn’t seem more than a basic inspiration. The gameplay is very straightforward. You avoid bullets, shoot the boss until their HP bar’s down and move to the next one. Each boss has a few different, unique attack patterns. While dodging the bullet barrage, you need to watch where you shoot too. Parts of the bosses’ costumes make up the targets, and our beloved costume-break feature kicks in if you’re good enough. This usually gives you some coins for your score and a weapon upgrade. Oftentimes this will initiate a change of attack patterns too. Several stages also include some environmental hazards (tagline ‘Sushi has never been this painful!’). 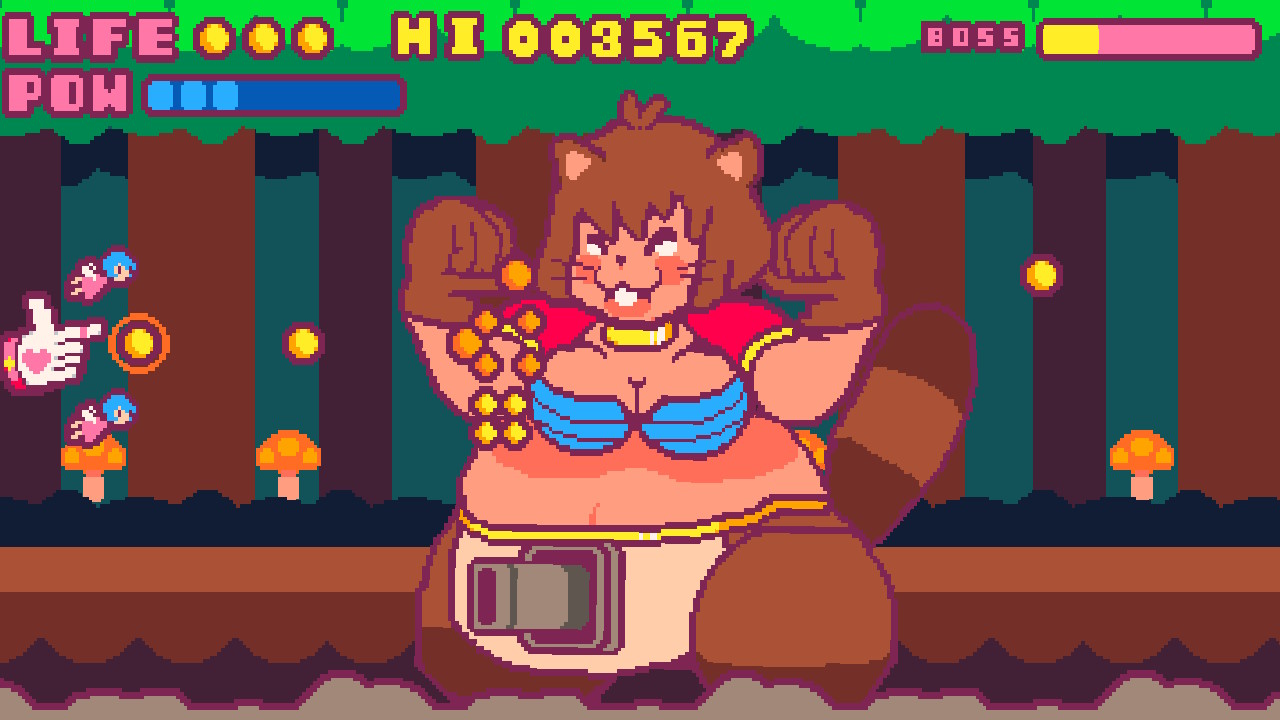 This variety keeps you on your toes, and, together with the distinct visual designs, each boss feels fresh, unique and mostly: memorable. I think the first playthrough took me a little over an hour (maybe more because looking at my score tally at the end it took me an embarrassingly large amount of continues… I’m not saying how many but it was more than 41 and less than 43). In total, I probably spent 4-5 hours until I nailed a no-continue run. This all comes together to create a very compelling SHMUP for casual enthusiasts like me, though it may be on the easy side for genre experts. The game starts off feeling noisy, chaotic and overwhelming, but once you get the patterns down you can feel the rhythms and it turns into a well-structured composition. While I personally love SHMUPs’ exciting music, big explosions and adrenaline-inducing action gameplay, I feel the most fulfilled when I figure the game out: when I feel like I outsmarted it by knowing exactly how to move and where to hide, while still being able to dish out damage. The short length, infinite continues and near-instantaneous load times (playing on the Switch Lite) made this process an absolute joy in Fingun.

There is a story too, but in proper shmup tradition, there isn’t much of it. After being treated to the general backdrop in a beautifully animated pixel art opening sequence, the bosses just appear one after another with nothing but a transition screen to catch your breath in-between. While there is a similarly awesome pixel art animated closing scene, it would have been nice to have maybe one or two lines of dialogue at the end of each boss to tie things together a little. I can imagine this would stagger the pure-action rush a little, but that could perhaps have been resolved by providing an additional arcade mode without the lines.

In fact, when it comes to game modes, the game is a little barebones and it’s a shame. There’s a training mode that explains the easy-to-grasp controls in a short tutorial session, a normal mode that has you playing through the story, and a level select in which additional stages become selectable after beating them (after which you’ll continue to play through the boss sequence as though it’s normal mode). The game also provides some nice finger-gun customization options where you can pick the fingers you’ll be shooting with and what comes to your aid as a shield or additional gun as you gather powerups. Additionally, there’s a gallery with CG images that give the characters just that little extra character and charm. Yet it would’ve been nice to have a time/score attack, a random-order mode, and so on. 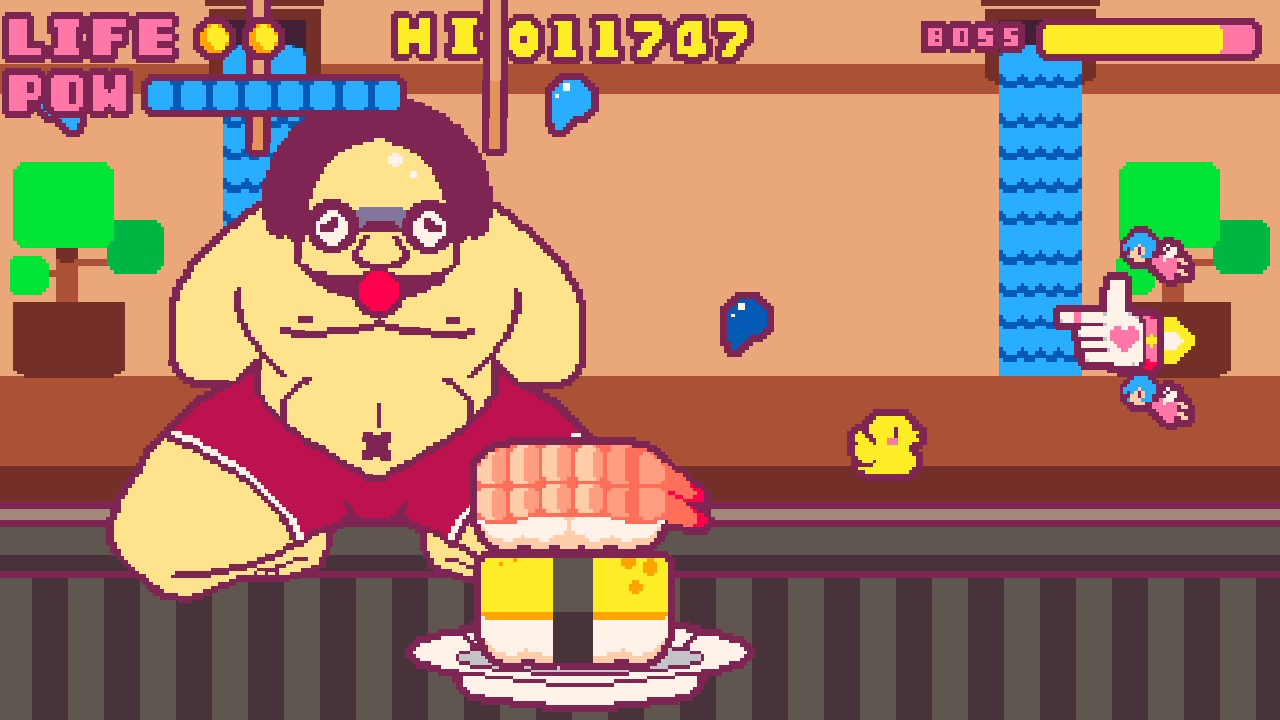 Aesthetically, the game is very distinct. The pixel art has very thick lines, big flat coloured surfaces with the odd line or scratch to indicate texture. The 14 or so character designs are all based on familiar tropes with some twists. The game features gals like a beach-going librarian-type (who balances an angry gull on her butt), a tanuki tank (which, now that I wrote it out, I can’t help but see as a pun), and an aubergine- and fire-shooting streamer-gal, next to guys like a shibari-tied sushi-restaurant-goer and a team of muscly masked heroes. It’s very noteworthy that most characters are full-bodied throughout — a body type that we don’t see terribly much in games, which is a shame. This seems like a conscious choice, and it contrasts sharply with the few non-pixel art pieces you can see in the game’s cover art and in-game gallery. These slim down the characters with no respect for the original design and style. While not incompetently drawn, they lack the class and unique feel of their pixel art counterparts and end up feeling out of place and haphazardly inserted. There’s a time and place, no doubt, but to me this wasn’t it.

Yet with the bright colours and cheerful, exciting music, the fact you’re undressing guys and gals with your fingerguns can be easily forgotten, and this is where I think the game probably gave me more food for thought than it ever intended. In the opening scene, we see the main character chilling in the open sea, until an evil, provocatively dressed lady enters the stage, aiming to install an aubergine-shaped satellite set to destroy the heart-marked world. Our pink-haired gal (who also figures in the main menu in utterly adorable little animations) teams up with a flying hand and sets out to stop the attack. The imagery isn’t subtle: the heart-marked signifies a love-centring society, under attack by a technology-induced beam of aubergine-emojied sexuality. The most intimate of life’s connections itself is objectified, repackaged, ‘optimised’ and finally commodified. We are sold, en masse, a symbol-annotated, audiovisual representation, the look and sound of sex, the idea of intercourse; we are sold the concept of a relation, a steamy night of what is a parasocial, transactional reflection of the celebration of a human relation — be it a quick one-night stand or a long term bond.

Throughout the game, we’re but a finger, and behind every corner there’s lascivious temptation eager to bring us to our knees (pun intended). Whether we’re in the library, on the beach, in the forest, or watching people play games, it seems we’re always just one finger click, one move away from buying into instant, but ultimately empty gratification. The in-game resolution is to simply give the temptation the middle finger, tear through the aubergine-emoji-shaped satellite and go right back to chilling in the open sea, where, of course, there’s plenty of fish to establish a real connection with. Here Fingun feels like a parody of the parasocial parody of sex, a reflection of a reflection. In this sense, it is a unique cultural artifact that seems impossible to understand without understanding the odd social dynamics of our current times.

In sum, Fingun’s a great ride of a game: a competent shmup, with a vibrant and memorable, sexy aesthetic. If you want to get an S-ranked, no-continues run there’s a good few hours of fun to be had. For what’s about $6 at full price, this is a great balance of fun, price and time spent. And if it can get you to think a little about the way capitalism transactionalizes every single part of our lives until we ourselves are walking shops, selling not only the bulk of our time and energy as labour, but also our sexuality and even our leisure time on the digital, social media marketplace, then that’s a bonus in my book. 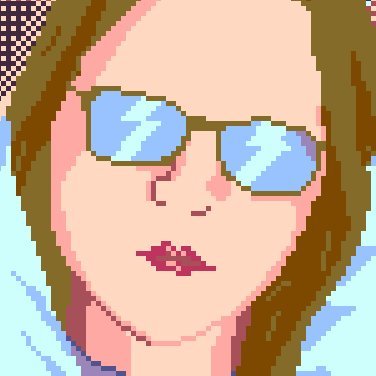 Tsuchanjohnson occasionally writes a review or an opinion piece, sometimes here at DDNet. In his spare time, he plays games and thinks too much.