What is the point of Uncharted: Legacy of Thieves Collection? I’m honestly not sure. The store listing for it runs through all the usual buzzwords: “remastered in stunning detail”, “improved visuals and frame rate”, “DualSense wireless controller features”—none of which make any practical difference to two of the most cutting-edge games on the PlayStation 4, that are already playable on PS5 anyway, and that already look phenomenal, in that lush, tourist-brochure photorealism that Uncharted has spent the last decade perfecting. A few more pixels on screen, a few more frames rendered each second, and a mediocre implementation of DualSense functions—tech that I’m actually genuinely excited about, and can make a world of difference when used well—add nothing to that.

But more to the point, I’m not sure what the point of bundling the worst game in the Uncharted series and the best since Uncharted 2 is, other than technical convenience. Packaged together in such a way inevitably forces comparison, and when you put Uncharted: The Lost Legacy next to Uncharted 4: A Thief’s End, the latter doesn’t come out well at all.

I’m not going to try and suggest Uncharted has ever been anything especially deep or profound, and there’s a lot of rightful criticism of the way they overlook everything from Drake’s murder sprees to the uncomfortable subtext inherent in the whole “stealing ancient artifacts” thing. At the same time, the early games did a good job of putting a modern spin on the pulp adventure fantasy and grounding its main characters in charisma and humanity, if not necessarily complexity. They’re rollicking good fun in the way that watching Indiana Jones is rollicking good fun, and beneath all the wisecracks and scenarios so ridiculous and overblown that you can’t help but just go with it, there’s a compelling emotional core in the relationships between Nate and his compatriots. They’re pure, rollercoaster entertainment that never pretends to be anything else, with enough heart to hold that together. 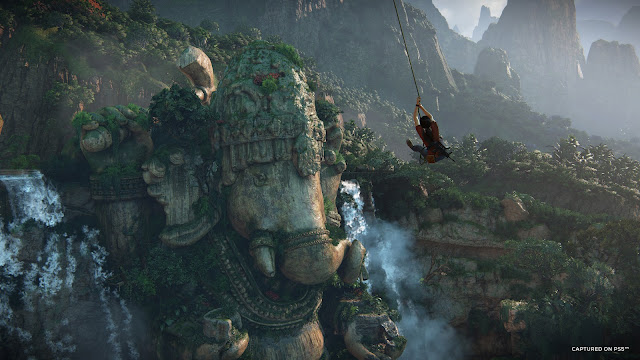 Uncharted 4: A Thief’s End is a game that tries to be more, and ends up so much less. It’s an attempt at a more serious, more dramatic spin on Uncharted: Nathan Drake is retired and (sort of) happily married, but then the sudden reappearance of his long-thought-dead brother sees him roped into another grand search for lost pirate treasure—but to the detriment of his marriage. It’s an attempt to use the backdrop of a wild adventure for a more true-to-life look at relationships, both marital and familial, and to ground the larger-than-life nature of Uncharted in something more personal.

A noble goal, certainly, but one that Uncharted 4 falls short on because, for all its ambitions, it lacks substance. Its drama is overplayed and superficial, every character reduced to some trope: the manchild husband, the nagging wife, the bad influence. As much as it wants to explore the dynamics of the relationships it depicts, it never actually does—there’s no growth or actual depth, just the presentation of “mature” themes and the expectation that that’s enough. It’s an attempt to turn a game about globetrotting, quip-trading treasure hunters into a prestige TV drama; instead, it winds up being Everybody Loves Treasure-Hunting Raymond.

The most frustrating part, from the perspective of the longtime Uncharted fan that I am, is how much of the series’ magic is sacrificed for such a hollow end. Frivolous entertainment that the previous games were, the relationships that they depicted were genuine: messy, playful, and most of all, honest. When I think about what I like about those games, the first thing that comes to mind isn’t the ludicrous sight of climbing a derailed train hanging off a cliff in the Himalayas or unearthing the lost treasures of El Dorado; it’s the natural, organic nature of the way Nate and Elena’s relationship grows, the spanner that Chloe throws into the works—in both plot and theme—and Sully’s constant mentorship. Uncharted 4 abandons all of that to chase the spectre of “serious” drama, but mistakes empty grittiness for substance. 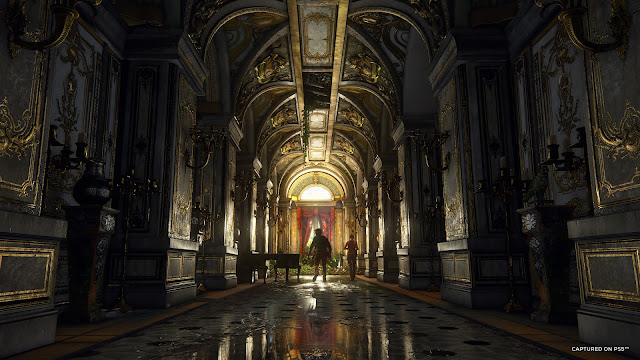 Enter Uncharted: The Lost Legacy. As a standalone expansion, it retains all the things that Uncharted 4 did do well: the more refined stealth mechanics, the surprisingly dynamic grappling hook, the attention to detail in the set design, the gorgeous sights, the sheer technical prowess of it all. But under a different director and writing team, it uses that foundation for something that feels a lot more like the Uncharted I know and love; a game of adventure and excitement, underscored by genuine character work and the sense of humanity that Uncharted 4 lacked.

Having Chloe Frazer—by far, Uncharted’s most interesting and memorable character—in the lead role certainly helps. Claudia Black’s performance is astounding, as usual, and backed by a script that allows her to really explore Chloe’s full range. She’s still the same sarcastic, playful rogue she always was, with charisma, sass, and smarts in equal measure, but we also get a peek at the more intimate side that she usually tries to keep hidden behind jokes. Even when Lost Legacy goes down a more serious path, it does it with a sense of authenticity that Uncharted 4 lacked—the “daddy issues” theme is a little uninspired in concept, but the script and performance both bring it to life.

Chloe also finds a perfect foil and companion in Nadine Ross. After an introduction in Uncharted 4 that set the internet on fire, Nadine wound up being little more than the muscle for that game’s antagonist, but in Lost Legacy, she finally gets to be her own person. Her no-nonsense attitude and dry sense of humour balance each other out nicely, and her vulnerability, as closely-guarded, as Chloe’s, gets to peek through. The friendship that develops between Nadine and Chloe—playful, supportive, but not always easy—is the kind of genuine character-centric stuff that made the early Uncharteds what they were. 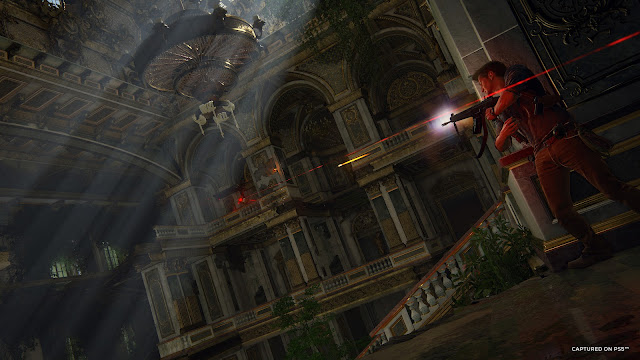 Lost Legacy even goes as far as trying to engage with the imperialist foundations of the genre, turning a story about stealing other cultures’ treasures into one about trying to preserve them. It doesn’t always hit the mark—as Matt S. pointed out in his original review, having a South African and an Australian national, even one with Indian heritage, trying to keep Indian artifacts out of the hands of an Indian insurgent raises some questions in light of Commonwealth history—it is, at least, an acknowledgement, and an attempt to move in a different direction.

One of The Lost Legacy’s biggest strengths is its brevity. At around seven or eight hours for a typical playthrough, it’s the shortest Uncharted yet, and absolutely better for it—it never overstays its welcome, never feels bloated, never gets bogged down in exposition. Snappy pacing keeps the excitement from running out of steam and makes the impactful moments all the more so.

But here’s the thing: everything I’ve written so far applies just as equally to the PS4 versions of these games, both of which are playable on PS5 as it (even if they can’t be bought individually anymore). So what does Uncharted: Legacy of Thieves Collection actually offer? A slightly higher resolution in its Fidelity Mode, the result of which is barely noticeable unless you compare the different versions side by side, and a higher frame rate in Performance Mode, in a game that’s cinematic to a fault, by design, and is far removed from the sort of precision where frame rate actually matters. The DualSense application amounts to little more than slightly more varied forms of rumble, and feels like a huge missed opportunity after games like Astro’s Playroom showed how much that tech is capable of. Hell, with the way Uncharted’s been hiding in-game loading since the PS3 days, even the super-quick PS5 load times aren’t really a factor unless you’re switching between games a lot. 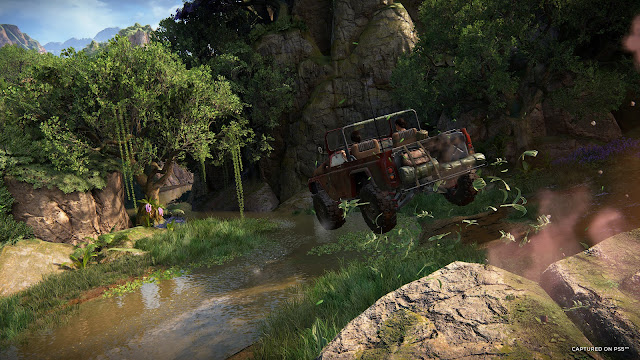 Which brings me back to that question: what is the point of Uncharted: Legacy of Thieves Collection, really? Sure, Lost Legacy is a wildly enjoyable adventure in classic Uncharted style, and even Uncharted 4, for all my complaints about it, is a game a lot of people clearly loved, and they’ll love it again here. But when the only thing these “remasters” have over the PS4 originals that you can already play on PS5 are modest technical upgrades whose practical and aesthetic improvements are marginal at best, what purpose do they actually serve? When even someone who’s never played either game before and is breaking in their brand new console and can get an identical experience for half the price by just buying the existing PS4 bundle, what is this Legacy of Thieves Collection other than a half-step in a pointless technical arms race and a chance to cynically sell some unnecessary version upgrades?

We would all be served better if Sony focused on bringing us some of the incredible games that aren’t readily available on the console already.
Share this