Compile Heart is giving the people what they want: more Neptunia! The developer recently announced Hyperdimension Neptunia: Sisters vs. Sisters (in Japan, Choujigen Game Neptune: Sisters vs. Sisters). The RPG is produced and directed by Hikaru Yasui and stars four little sisters with new character models: Nepgear, Uni, Rom, and Ram. Here’s a very brief look in the form of a single screenshot, thanks to Famitsu: 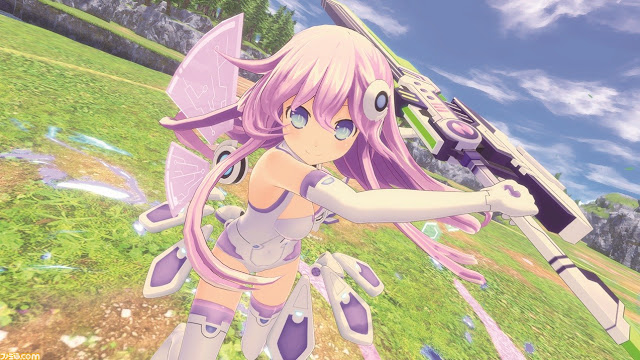 The four little sisters have been put to sleep by “someone” for two years. When they awaken, smartphones called MagiPhones have completely taken over the market and Planeptune has become ground zero for the Buzzer Phenomenon, which brings a bunch of monsters to the area. To make matters worse, the older sisters are missing. Parties contain three characters who battle in real-time; characters not being controlled by the player function on their own.

Developed by Compile Heart (and, based on past titles in the series, presumably published by Idea Factory), Hyperdimension Neptunia: Sisters vs. Sisters will be released for PlayStation 5 and PlayStation 4 on April 21, 2022 in Japan. There will be three editions available: standard, Limited, and Digital Deluxe.

Until now, Kojima Productions has been all about video games. The Japanese development studio was founded in 2005 by its namesake, game designer Hideo Kojima. Kojima is perhaps best known as the creator of the Metal Gear series. For years it did very little else, although it is behind the infamous PT demo for a cancelled Silent Hill game. Lately, though, Kojima’s name immediately brings to mind Death Stranding (and its director’s cut). Death Stranding features many A-list actors, including Norman Reedus, Mads Mikkelsen, and Lindsay Wagner. Kojima Productions has now announced that it will be expanding to new media genres.

#KojimaProductions are proud to announce that a new business division will be opening in California, USA.
This will explore opportunities beyond game development into film, television and other forms of entertainment.
Read more: https://t.co/fWUGl1OwPw pic.twitter.com/8dcl7STIQL


In a tweet (above) and a gamesindustry.biz (formerly Gamasutra) article, the developer announced it was expanding to Los Angeles with a division dedicated to music, television, and film. It will be led by Riley Russel, who has nearly 28 years of experience in various roles with PlayStation. In the article, Russell states, “The team has as its charter, the goal of expanding the reach and awareness of the properties now under development at Kojima Productions, and to make them even more a part of our popular culture… We are truly excited and looking forward to working with the very best entertainment talent we can, across all of the entertainment industries.”

Yoshiko Fukada, business development manager for Kojima Productions, also spoke regarding the new division. In the same article, he states,  “Finding new ways to entertain, engage and offer value to our fans is essential in a fast-moving, ever changing storytelling world. Our new division will take the studio into even more areas that present our creative narratives beyond video games and to open up ways for our fans to communicate and immerse themselves in these spaces.”

Twelve Minutes is a heavy game. It’s mechanics aren’t unfamiliar: it’s point-and-click, and time repeats itself until you deal with a situation the “right” way. I played it on PC and Xbox One (here’s my review), and in all honesty it doesn’t play too well on console because the controller slows down the ability to point and click. Regardless, it’s a great title, and if console is the only way someone can play, they should take that opportunity! That’s why it’s good that the game is moving past PC and Xbox Series/One and also launching for PlayStation 5, PlayStation 4, and Nintendo Switch.


The top-down thriller features three characters, all with very famous voices behind them. A man (James McAvoy) returns home for a romantic evening in with his wife (Daisy Ridley), but things go belly up when a police detective (Willem Dafoe) breaks in and accuses the wife of murder. The player controls the husband. And the husband dies a lot. With each playthrough, doing something a little different can show new sides to the story or progress towards finding a way to stop the cop from murder. The story gets quite dark, unexpectedly so, in a really good way.

Developed by Nomada and published by Annapurna Interactive, Twelve Minutes will be released for PlayStation 5, PlayStation 4, and Nintendo Switch on December 7. As earlier stated, it is currently available for PC, Xbox Series, and Xbox One.

Martha is Dead will launch early next year

A slight delay from its targeted 2021, it’s been announced that first-person psychological thriller Martha is Dead will launch in the first quarter of 2022. The game is set in 1940s Italy and blurs the lines between reality and superstition. LKA’s last game, The Town of Light, was perfectly creepy, and I’d expect nothing less with Martha is Dead. Here’s the new release date trailer:


Martha is dead. Martha was murdered. Her twin sister, Giulia, is alone to deal with the trauma resulting from her sister’s murder. With a backdrop of war and her own secrets, Giulia’s search for the truth really can (and likely will) take a horrific turn. She will use marionettes to access repressed memories, keep up to date on the war, and take pictures purely for pleasure. The game launches with Italian as its default audio language, adding to its immersion.

Developed by LKA and Caracal Games, and developed by Wired Productions, Martha is Dead will be released for PC via Steam, PlayStation 5, PlayStation 4, Xbox Series, and Xbox One on February 24, 2022.

The Kids We Were: An arthouse indie with heart and soul