The fourth game set in the Life is Strange world (the others are Life is Strange, Life is Strange: Before the Storm, Life Is Strange 2) is set to launch in less than a month, yet it’s only now we’re seeing official gameplay footage. Honestly, I’m so excited I wouldn’t have even cared if Square Enix never showed us a thing, but this video bumps that excitement up a notch. In it, we’ll follow Alex as she explores the record store and meets some new people. Watch it here:

One of the people Alex meets is Steph, who will be the star in DLC available in late September. We see her rocking out in the radio booth, and she asks Alex to chose what to play next from two records. There’s some sort of chemistry there, like an automatic pull between them. The other person is Ryan, a friend of Alex’s brother, who is a state park ranger. The store is actually only open so he can buy a CD on common bird calls. There’s also another new friend in the store, this one of the furry variety.

Developed by Deck Nine and published by Square Enix, Life is Strange: True Colors will be released on September 10 for PC via Steam, PlayStation 5, PlayStation 4, Google Stadia, Xbox Series, and Xbox One. It will release later this year for Nintendo Switch, as was announced last week. Steph’s DLC, Wavelengths, launches September 30.

Most unexpected news ever: Catlateral Damage is being remastered!

I didn’t think Catlateral Damage was popular enough for a remaster, but clearly (and quite happily) I was wrong. I first stumbled across in for sale on PlayStation and since cat is in the title, it was an instant buy. The player becomes a cat who does, well, cat things. It’s ridiculously fun. Take a look at the trailer for Catlateral Damage: Remeowstered:

This trailer is silly, because the game feels so much happier than portrayed. I’m pretty sure cats are at their happiest being the most annoying creatures on earth, based on the fact one of mine enjoys staring at a curtain and meowing for half the day and another is currently trying to get into a closet with child locks on it. This new version of the game includes new content, improvements to UI/animations/visuals. Progression has been redesigned from the ground up and involves completing goals to unlock new levels and other game modes. The PlayStation 5 version has a couple extra features, including advanced haptics using the DualSense controller.

Developed by Manekoware, Catlateral Damage: Remeowstered will be released on September 15 for PC via Steam/Itch.io, PlayStation 5, PlayStation 4, Nintendo Switch, Xbox Series, and Xbox One.

Nintendo Switch users are quite taken by Pokémon UNITE, and it’s exciting to think of what’s to come as the developer prepares the title for a mobile launch late next month. In Pokémon UNITE, players fight in five-on-five team battles. The teams are battling wild Pokémon as much as they are each other. The battles allow a player’s Pokémon to level up and evolve. 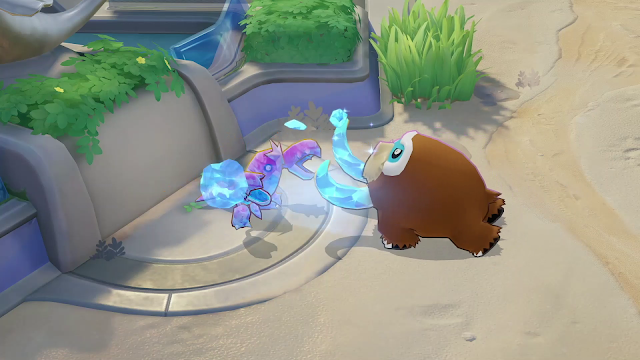 There are some possible bonuses based on the number of pre-registrations the game gets – and pre-registration is currently open on both Apple’s App Store and Google Play. If there are 2.5 million pre-registration, players will receive the Unite license for Pikachu. If the total gets to 5 million, they will also receive a Special Holowear. These are really big numbers, so if you plan on playing, definitely register now! You’ll have until the end of October to claim the rewards.

Developed by TiMi Studio Group with The Pokémon Company, Pokémon UNITE is already available for Nintendo Switch. It will be released for iOS and Android on September 22.

A narrative-driven adventure puzzle combined with space exploration, OPUS: Echo of Starsong now has a target release date. The game features two protagonists in a world where a substance knows as lumen is at the centre of a conflict for their power. Watch the new trailer here:

Lee has made some mistakes in the past, and sets out on his own to find lumen to make amends for what he’s done wrong. Along the way he saves Eda, a witch who can sense lumen. She will scan space for the substance, while Lee can search asteroids for it. As they travel, their stories slowly come out. Narrative is at the forefront of the game, while gameplay such as puzzles and resource management is kept simple to make it accessible.

Developed by Sigono, OPUS: Echo of Starsong will be released for PC via Steam on September 1; if you’re interested, there is a demo available.

Tales Of Arise: Here’s me being terrible at a game I love