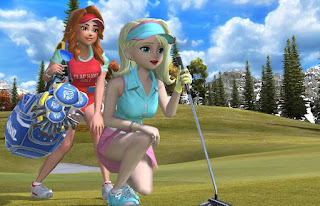 Each day I’ll review three titles from the most recent collection of releases. Today we have Clap Hanz Golf, Star Trek Legends and Tiny Crossword+

The developer behind Everybody’s Golf knows how to make an excellent, engaging golf game. Clap Hanz Golf takes the tight, fluid, vaguely arcade-like golf mechanics that we all love from this developer so much, and finds a way to give it a whole new level of character and personality. See, in Clap Hanz Golf, you’ve got a massive roster of characters to unlock and level up, and you’ll be forced to use them all because each match only allows you to use one character per hole. Playing a nine-hole competition? That’ll be nine different characters you need to enter as your team. 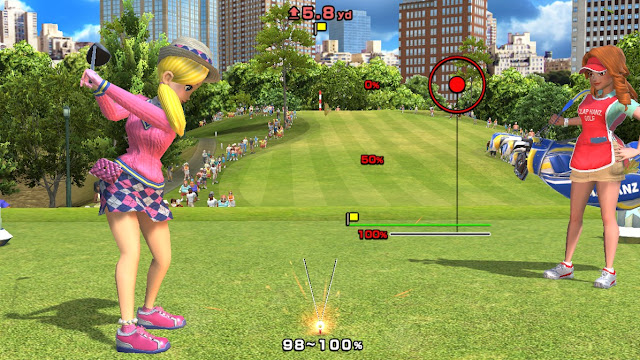 Each character has their own preferred clubs, strengths and weaknesses, meaning that, as you learn the courses and the unique challenges for each hole, you’ll start to have preferences for certain characters with certain holes, and I like the way the developer has encouraged you to use them all, rather than whichever character has the longest drive, which has been more traditionally how these games have worked. There’s no narrative to speak of, but each of the characters has a distinct design and personality, and swapping between them so quickly creates a vibrant, entertianing game bubbling charm. Importantly, it’s also one that is particularly well suited to shorter play sessions, which is perfect if you’re just in the mood for a couple of taps on your iPhone on the train ride home (and don’t worry, if you do like a more standard game of golf on your Apple TV back at home, there is a secondary mode where you can take your favourite character out for a round on the course and compete for the lowest possible score).

The only downside to Clap Hanz Golf is that there is a serious grind sitting behind the endearing presentation. New courses are unlocked by playing existing courses over and over again for stars, with the next course only being available once you’ve hit a certain threshold for those stars, and as you play on, the star goals become ever-bigger and more grindy to achieve. Each character levels up independently, and a few levels in, that process also slows to a crawl. They start out with a maximum level of 20, but you can further increase the maximum level of characters by competing in little mini-challenges. It’s worth doing to ensure that your favourite character has the highest possible level, but those take place on the same holes that you play in normal play, and each time you succeed, the maximum level of the character is increased by just one (which you need to then earn by playing more “normal” matches). That’s a lot of work for such a tiny gain. If you’re playing in the spirit of short bursts of play that the game was designed around, then this isn’t an issue, since you’ll be comfortable with slowly inching towards goals over many days and weeks, but the game very much feels like the developer originally intended on this being a micro transaction-loaded free-to-play mobile game, and didn’t spend too long rebalancing it to replace the grind with something more appropriate for a “premium” game. None of this is enough to ruin Clap Hanz Golf; it’s a brilliantly made example of golf and delight to play on every level. It’s just a game that’s also asking for a lot of patience at the rate of progress it offers.

In contrast to Clap Hanz Golf, for an example of what happens when what should be a free-to-play mobile title gets the “premium” Apple Arcade version and it goes bad, you only need to look at Star Trek Legends. This game has everything in it that you’d expect from an exploitative gatcha title; the “collectible characters”, the tiny, simplistic gameplay loops, and the utter lack of respect for the base property. In removing the microtransactions and other avenues to speed progress through this thing up, Star Trek Legends has inadvertently made crystal clear just how little worth this entire formula is. 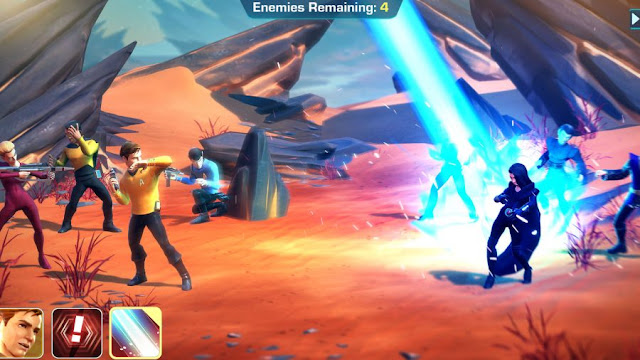 For one thing, Star Trek (the TV property) was never focused on violence, but that’s all this Legends “effort” can offer within its gameplay loop. I know the recent Hollywood films don’t understand the nuances of Star Trek (because Hollywood doesn’t really understand nuance at the best of times), and the game developers would likely claim to be inspired by the commercial success of those films, but Star Trek is about exploration and discovery, diplomacy, and the journey and romance of space. Star Trek Legends’ tiny, minimalist gameplay loop is exclusively about turn-based combat with various cheaply-rended denizens from the Star Trek universe. The narrative between these battles is written with an efficiency that borders on the non-existent, and during downtime the experience isn’t so much that of being on a massive spaceship with all your favourites from the long history of Star Trek as it is that you’re wading through menus, looking for the next thing to do.

It’s an ugly blight of a game, and to cap it all off, with vaguely big-headed takes on the Star Trek characters stuck on vaguely cutesy bodies with all the care and precision that goes into those Funko Pop grift-figures. It’s also buggy to the point of being broken in a way that games rarely are these days. In my time with Legends, it would randomly skip through entire paragraphs of text with no way of replaying them (a big issue when what shallow narrative there is is conveyed in tiny fragments of text), and there were crashes and freezes galore, which on the Apple TV can be difficult to exit out of. Even if I could forgive the presentation and bugs, though, the reality is that is a gacha game without the real money involved, and to me, that’s a bit like playing a video game version of a poker machine. The moment you take the excitement of real money being part of the experience is also the moment that you realise that these “games” are pathetic, and indeed the polar opposite of entertainment.

Crosswords are good for the vocabulary and mind. They’ve been around since the 19th century, and continue to be a relaxing weekend morning pastime for people across the entire planet (really, there’s nothing like coffee and a crossword in the Sunday morning sun). Tiny Crossword+ is unfortunate it that it uses the American approach to crossword puzzle design (I prefer the English-style approach, personally), but it does a good job of putting hundreds of puzzles in your pocket for some on-demand brain teasers.

To get the negative out of the way first; there are times where this game is clearly a case of quantity over quality. Sit down for an hour’s play session and you’re going to get the same clue – and answer – come up in three or four separate crossword puzzles. The difficulty doesn’t scale in a pleasant way, either. You’ll spend dozens upon dozens of puzzles flying through them because they are so simple the questions may as well be taken from that Friends episode where Joey dreams up a crossword puzzle that he can actually answer, and the clue is “a three-letter word, it’s not a dog, but a…” A puzzle game that wasn’t looking to keep players engaged for as long as possible would limit the number of puzzles that 99.99 per cent of the population could answer without thinking at around ten. It’s also strange that the puzzles are grouped by nation, so as to suggest a journey (complete 10 puzzles to move from Australia to India, etc), but none of the questions in the puzzle is in any way related to the nation that you’re supposedly visiting. That was a real missed opportunity to keep the flavour and variety of questions broad.

Once you’re into the more puzzling challenges, though, Tiny Crossword+ proves its value many times over. It’s never going to be frustrating, since useful “hint” options sit right at the bottom of the screen if you should ever get truly stuck. The daily puzzle gives you a reason to tap on daily, and while I don’t know how this would work on Apple TV, it’s the perfect thing to have on the iPhone for those little moments of downtime through the day. It’s not the perfect crossword game for the hardcore crossword fans, but I think it’s pitched perfectly for the widest possible audience, and it’s a perfect game for the Apple Arcade since the developers don’t need to burden players with advertisements or maximum number of players per hour. When it comes to crosswords, players just want to sit down and plough through a couple without distraction. This Apple Arcade version gives them that.

We’ll be back tomorrow with three more of these Apple Arcade new releases… and we’re going to start talking about the really exciting ones then.

Apple Arcade gets 30 new games: This platform is a real contender