Have I mentioned the new Life Is Strange announcement? Honestly, it’s already the game I look forward to most this year, and expect it to be a favourite. But as usual, I’m ahead of myself. Square Enix had a digital event late last week, and its crowning glory was the announcement of the next Life Is Strange title. It was days ago, and I’m so excited still struggle to get our actual words instead of just “!!!!!??***!!?*!” First, there was Max and Chloe. Then there was Sean and Daniel. This time, there is Alex. Take a look at the first trailer:

Life Is Strange: True Colors is episodic, but will be launched all at once on September 10 for PC (via Steam, Windows Store), PlayStation 4, PlayStation 4, Google Stadia, Xbox Series, and Xbox One. Our new protagonist is Alex Chen, a recent addition to Haven Springs who has always suppressed her psychic Empathy ability, which allows her to experience, absorb, and manipulate the strong emotions of others (which she sees as colourful auras). Soon after reuniting with her brother, he dies in an accident – but was it really an accident? Alex will have to learn how to harness her supernatural power to find the truth while uncovering dark secrets buried deep by the town’s residents.

It’s worth noting off the bat that this does not appear to be another numerical title. Partially because there’s no number, but mostly because it’s not developed by Dontnod; instead, the developer is Deck Nine Games, who created the Life Is Strange prequel featuring Chloe (Before The Storm). Instead of Syd Matters, the soundtrack features new tracks from mxmtoon and Novo Amor, and licensed songs from Radiohead, Phoebe Bridgers, Gabrielle Aplin, and more. In addition to Life Is Strange: True Colors, the Life is Strange Remastered Collection was also announced, including Life Is Strange and Life Is Strange: Before The Storm. Life Is Strange: True Colors will be released digitally and physically in three editions: Standard, Deluxe, and Ultimate (which includes the Remastered Collection).

I could rave about Ooblets for days, but I will do my best to keep this brief enough. The sim game is about the life of a newcomer resident of Badgetown. Create your perfect farm, and run it using darling Ooblets (adorable weird little creatures) that you earn by battling other Ooblets using cards. The music is the happiest I’ve ever heard, and instantly puts a smile on my face. The game is currently in early access, available for Xbox One and PC via Steam. Originally launched last July, the developers have been steadily releasing updates (despite only being two of them, and they have a newborn at home to boot). Last week, they released update v0.7, dubbed the Quality of Life update. Take a look at a video regarding the update:

I know for me, the best part of the update is thing-on-a-thing. So simple, yet absolutely vital! Until now, the most you could do with figurines is display one of each at town hall and store the rest, but now those things can go on other things, like bookcases. Now my home can be full of chachkis and feel complete. Another great new feature: full chests can be moved, so there’s no more shuffling items back and forth. There is a new cactus in Mamoonia that allows you to harvest the ingredient to make a sleepy tea that allows you to sleep all day, at any time. Drinks can no longer be crafted on the stove, instead requiring a kettle that can be purchased at the café.

Honestly, if that were it, the update would have been more than enough considering it’s an in-between leading up to the big Port Forward update due mid-year. There’s a 3D printer to make figurines, as well as decor items. A handful of items are available at first, but the range can be expanded by feeding the machine those weird square you fish out of the water (otherwise known as the relic that is floppy disks). The game now supports widescreen (or I suppose, more widescreen options than before, as I’ve always had it in widescreen) and D-pad navigation. It’s easier to add Ooblets to your party while at the farm. There are some UI improvements in dance battle scenes, including clustering icons and bigger cards. The list of bug fixes is extensive, but the best include Wildlands rewards fix and fixes for several battle cards (for example, Chickadingding’s Slipper Samba and Bristlebud’s Stompulent). There will be several more updates this year, leading to the full launch tentatively scheduled for late 2021/early 2022.

PlayStation VR still works fine, but of course, it’s never too soon to plan ahead. Sony vaguely announced it was working on a new version of PSVR for PlayStation 5, and soon after made an official blog post about one big upgrade: the controller! It’s got an odd, orb-like shape; despite being strange-looking, it actually looks like it would be quite comfortable to use. I have small hands and short stubby fingers, though – thanks, dad – so I expect I’ll probably struggle more than most, but I’m cautiously optimistic. 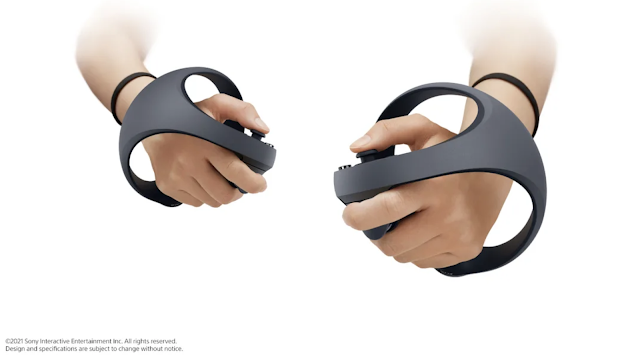 As you can see, the controller is in two parts, one in each hand. Each contains a joystick, two of the four triangle/circle/ex/square buttons, a grip button (L1/R1), a trigger button (L2/R2) and a create button (which I assume, by process of elimination, is the unmarked oval button). The trigger buttons are adaptive and adds tension similar to the DualSense controller when pressed. Actually, several other features are also inspired by the DualSense controller, including haptic feedback.

There is finger touch detection, allowing for natural gestures during gameplay. The controller is tracked by the headset via a tracking ring across the bottom of the controller. In the PlayStation Blog announcement post, Hideaki Nishino (Senior Vice President, Platform Planning & Management) states, “We’re thrilled with the controller we developed, but what matters now is how game creators will take advantage of the features to design the next generation of VR experiences. Prototypes of our new VR controller will be in the hands of the development community soon, and we can’t wait to see what ideas they come up with and how the controller helps bring their imagination to life!”

It is far, far into the future. A hormone was discovered in the human brain that gives people extra-sensory powers. Before of this, deranged mutants (the Others) have started coming down from the sky seeking to nosh on human brains. The Others can’t be attacked conventionally, and the extra-sensory powers are the key to defeating them. There are two stories included that intertwine along the way.

Scarlet Nexus will be available in a standard edition physically and digitally, as well as in a digital Deluxe Edition. The Deluxe Edition includes the game, a “Red” battle attire set, a digital soundtrack, a digital art book, and more. Pre-orders are open now and includes several in-game cosmetic upgrades, such as special “Audio” attire battle and three additional attachments.