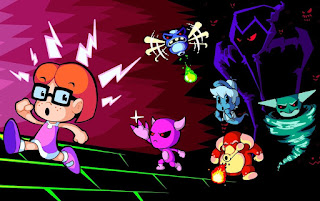 If you’re going to be doing something inspired by the horror of the 80’s, you do need to go into it with a balance of humour and the grotesque. Those films are simply not there to be taken seriously as horror artefacts now (I would argue that most of them were never meant to be outright terrifying). Thankfully, that seems to be exactly the approach that Sunshine Manor is taking.

Combining 8-bit style graphics with an 80’s-soundtrack, Sunshine Manor is a “cat & mouse horror” where the demon that’s chasing you can be found anywhere. You’ll need to solve puzzles, avoid danger and fight in some combat, all the while enjoying a combination of fun nods to classic horror properties and the occasional spooky scare.

The game’s getting a release this “Fall” (that is Spring for those of us south of the equator), and will release on PlayStation 4, Xbox One, Nintendo Switch and PC via Steam.