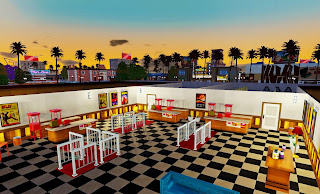 Ahhh, the ’50s. The boomers were just being born, and at that age, they were cuter than the odious wealth hoarders they would become. Ronald Reagan wouldn’t drive feral libertarianism as the world economic standard for another 30 years. In fact, back then, the world was just emerging from a nasty World War and everything seemed so hopeful and bright. That’s what Indian developer, Tentworks Interactive, is looking to tap into with City Block Builder.

City Block Builder is a simulator set in Los Angeles in the 1950’s, and will release on PC later this year. As per the media release: “Fresh off the victory of WWII, Los Angeles is the pop-culture capital of the world. With the glitz and glamour of Hollywood, designer shops, and finest cuisine money can buy, all under a canopy of clear blue skies, the City of Angels represents the “American Dream” at its most ideal.”

The stuff that you’ll be building in City Block Builder is just pure fun. We’re talking about cinemas, restaurants, bowling alleys, jazz clubs, theatres, parlours and so on – all the nostalgic stuff that makes for a fun themed afternoon out now was daily life back then, and this game looks to capture all of that. What’s more, you’ll be able to micro-manage every one of those businesses. You can choose what movies the cinema plays, what food is on the menus, which bands are playing at the clubs, and so on, with the eventual goal being to have the greatest pocket of entertainment in the world.


The developers have been careful to capture the aesthetics and atmosphere of the era, from the design of the art and signage, right down to the look of the movie posters and fashion choices on display.

This game really does look like a lot of fun. It’s a challenging undertaking that the developers have set themselves, with so many disparate business types to balance out, but hopefully, they can achieve it, and we can have another excellent entry in the burgeoning simulation genre.