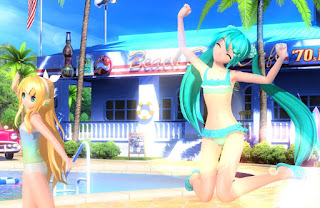 I don’t usually cover sales figures here on DigitallyDownloaded.net, because how well a game sells is really irrelevant to the quality of it. We’re here to talk about art and stuff, not the business of making games, but since this is about the goddess herself, I’ll make the exception: the PlayStation 4 Hatsune Miku: Project DIVA Future Tone release has topped 550,000 sales worldwide.

Related reading: My 4,000-odd word review of the game. No one’s ever written more about her!

Naturally, any game that has sold more than 500,000 copies worldwide is clearly popular and celebrated so… how’s about some more sweet Miku goodness, SEGA? Not that I’ve stopped playing the Nintendo Switch semi-port of this game, but I’m ready for more. Perhaps with a dating simulator mode and…

Sorry, I lost my train of thought. What was I talking about again? Oh! That’s right. Miku is great.