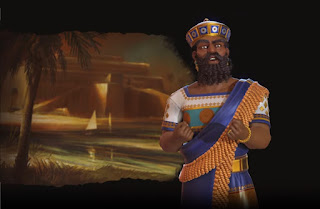 The Civilization VI season pass is turning out to be excellent value. Every two months you get new civs to play as, meaning that as you wrap one campaign up you can start playing as something new immediately (yes, it takes me months to finish Civilization VI campaigns. I play on epic length and I have to review 100,000 games per week, remember).

Related reading: Our review of Civilization VI on PlayStation 4.
Anyhow, digression aside, Babylon looks like a great addition to the mix, and it is available for season pass holders now. You’ll play as Hammurabi (of course), and enjoy particular advantages in the early game (also makes sense). Details below:

Civ Unique Ability: The “Enuma Anu Enlil” ability allows Eurekas to provide all of the Science for technologies, but decreases the amount of Science generated each turn.


Leader Unique Ability: Hammurabi’s “Ninu Ilu Sirum” ability constructs the lowest Production cost building in each specialty district for free the first time that district is built. The ability also grants a bonus Envoy when any other district is constructed for the first time. Does not apply to the Government Plaza.

Unique Building: The Palgum replaces the Watermill. It unlocks with Irrigation and provides additional Production and Housing. It also increases the Food generated by all Freshwater tiles, but requires the City to be adjacent to a River.

There’s also a new game mode – Heroes and Legends – and while I don’t usually play around with these myself, this one really does seem neat, as you can recruit Heroes to your civilisation, who have a finite life, but leave behind epic Great Works when they die, which should give the tourism victory goal a big boost.

There are also a couple of minor additions, including 24 new great people (which finally brings Rumi, a Persian poet and point of pride to the culture equivalent to Shakespeare himself, into the game), and six new city states to meet, trade with and, if you’re so inclined, conquer.

A very good update indeed. Enough to tide you over for another two months.