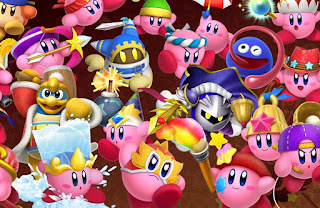 People often forget that the genesis of Super Smash Bros. was as a modest, local multiplayer, fun-over-competition brawler. Given how bloated and meta the series has become it is easy to forget that, but on the Nintendo 64, Super Smash Bros. had a tiny few characters (12), preferenced simple mechanics over elaborate, nuanced fighting systems, and was generally content with being a game to play while drinking beers and chatting with friends.

Kirby Fighters 2 on the Nintendo Switch is a spiritual successor to that genesis. It’s a cute little fighting game that people of all ages can leap into and enjoy, and while it won’t ever be found on the esports circuit, it’s for the best that it doesn’t try. The way that you’ll enjoy this one is when you’ve got a group of people together of very different skillsets, and you all just want to play a game together, without the complications of needing to learn or teach how to play first.

The main gameplay mode is that multiplayer, where up to four people can compete to prove who is the greatest Kirby of them all. The entire roster is made up of a choice between Kirby in one of a number of different “hats”, or one of a few of Kirby’s non-vacuum buddies. Naturally, each Kirby hat performs differently, so Yo-Yo Kirby flicks spinning discs of doom at his opponents, while Wrestling Kirby likes to close for the takedown. Beetle Horn Kirby, meanwhile, has a mean charge attack on him thanks to the spiky poking device on his head. Each of these Kirby types only has a couple of different attacks, and you’re really going to be guided by the type that amuses you the most, rather than an inherent desire to “master” one of the characters for competitive play. 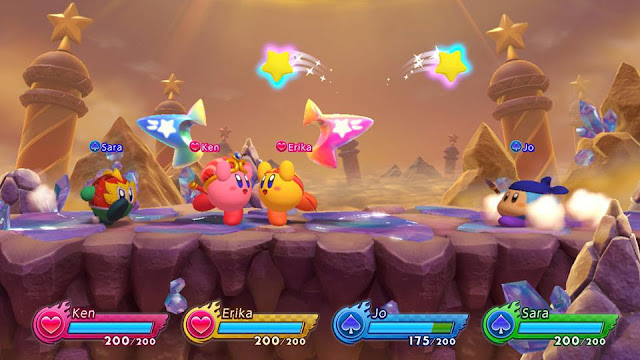 Each of the dozen or so stages has its own gimmick to take account of, whether that be tight corridors, shooting plumes of magma and flame (great fun to spit your opponent into one of those after having used Kirby’s suck ability to inhale them), or gusty breezes that blow you across the stage. In comparison to a game like Smash Bros. these stages are all small in scope, and designed to cause a short whirl of melee before the winner is decided. If there’s one criticism that I have of Kirby Fighters 2 it’s that the stages are so overbearingly colourful and the various attacks and effects so explosive in energy that it’s relatively easy to lose track of what’s happening with your Kirby. There’s just not enough there to help clearly outline each character and who they belong to.

But, again, this isn’t really a competitive game, and, even if you do run out of health because you have lost track of your Kirby, the restricted level design makes sure that all the other opponents will be out soon too, and it’s only a couple of seconds before you’re playing again (and this time on the hunt for revenge). And even then, rather than risk letting you get bored for even that tiny period of downtime, being knocked out turns your Kirby into a ghost and gives you a chance to get back into the game by successfully catching a still-living Kirby, with the game only being over when there’s just one still-living Kirby left alive. There’s more than a few shades of Bomberman in that system, and Kirby Fighters 2, just like we see with Bomberman at its best, does a great job in giving players a fun moment for bragging rights when they do win, without making the victory and competition override the principle goal of having fun while playing.

While the combat systems are simple in Kirby Fighters 2, the action is hectic thanks to the abundance of items that get thrown onto the field of play. Like with everything else in the game, the range of items is deliberately limited and will give older players (like me) a rush of nostalgia because their role is similar to that of items played in that original Super Smash Bros. These items range from providing a minor healing effect through to bombarding opponents with dangerous explosives, and while none of them are “overpowered” as such, they can play a significant role in determining the victor of a level. 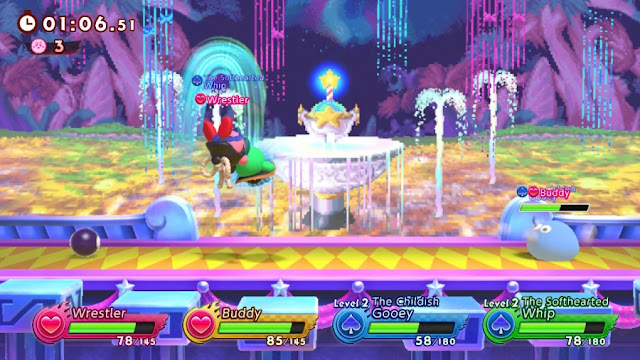 The single-player options in Kirby Fighters 2 are limited. There’s a “story mode” which provides players with a 50-floor tower to slowly climb, with each floor having some kind of enemy to defeat along the way. This mode is well-designed and even a little bit strategic as you’ll get the option of three different “power-ups” for Kirby with every victory and new floor along the way. The decision to boost your side’s maximum health, or take on a booster that will let them cause more damage can allow players to develop their own unique approach to fighting and that is important, as the later levels do become quite difficult. By the time you’ve cleared that once, however, you should be done with unlocking most of the stuff for use in multiplayer and there won’t be much reason to replay it, unless you want to gun for new high scores (yet another point of direct comparison to the single-player value of the original Smash Bros.).

But, really, single-player isn’t what Kirby Fighters 2 is about. Nor is it about the relatively serious tone of online multiplayer. Kirby Fighters 2 is a rare gem in that it’s a local multiplayer-orientated game that, in 2020, was not developed by a small studio working on a micro-budget. This game, to me, is a reminder of the dozens upon dozens of hours I would play Super Smash Bros. on the Nintendo 64 with family and friends, at a time before anyone cared about a “meta-game” or the tiered rankings of dozens upon dozens of characters. Kirby Fighters 2 gets the party fighting game genre right back to the most simple of basics, and it’s adorable in the process. That’s a win-win.