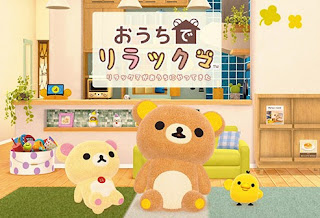 The publisher behind the upcoming Ouchi de Rilakkuma: Rilakkuma ga Ouchi ni Yatte Kita on Nintendo Switch has released a new trailer, and it’s the most charming-looking game. Given the success that the Rilakkuma animation on Netflix has been, and the general popularity of the bears, I would have thought an English localisation of this one would be a shoe-in, but apparently, that’s not to be. At least, not for now.

The trailer showcases what looks like a light-hearted, fun-for-all minigame compilation, where you get to play little rhythm games with the bears, or a “snowball fight”. Otherwise, you just hang out with them and chill – a big part of the Rilakkuma appeal is the theme of “relax”, so this is a spot-on feature to the property. With simple (but gorgeous) graphics and plenty of charm, this game really does look like it’ll be something special for fans of the oddball mascot character.

(Though the absence of Kogumachan from the trailer is conspicuous and concerning. It was bad enough that he was left out of the anime. Why are they not giving him a fair run? ARGH!… though he is on the game’s box art, so it would seem that he’s going to show up at some point.)

The game is due for release on Nintendo Switch on November 5. Again, in Japan only at this point in time.

One of the most promising Chinese games is just days away…