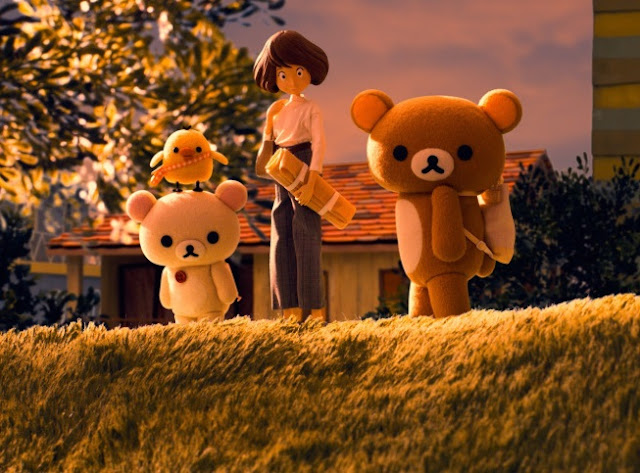 Hello Kitty is facing some severe competition as the unofficial mascot of Japan’s heart and soul. It’s a bear in a bear suit, and his name is Rilakkuma. Now, he has his own TV show produced by Netflix, and it might just be the best money that Netflix has thrown into that particular market.

As I’ve observed a few times in the past, one of the biggest differences that I find between the aesthetics of Japan (and other wealthy Asian nations), and Australia (and the west), is the way that Japan uses characters and mascots to brighten the world up, and create positive associations for brands and organisations and the population. Every city, region, and prefecture in Japan has mascot characters. Every business and government agency does, too. And by “every”, I really do mean every. You get off the plane in Australia and your eyeballs are assaulted by ugly blue tape in the customs area declaring how you are now in the domain of the BORDER FORCE (and you better be downright terrified of their authority!). Get off the plane in Japan and images of cute little dog – Custom-kun – welcomes you to his country, while asking you to please follow the customs process.

You tell me which country seems more pleasant, right from the outset. 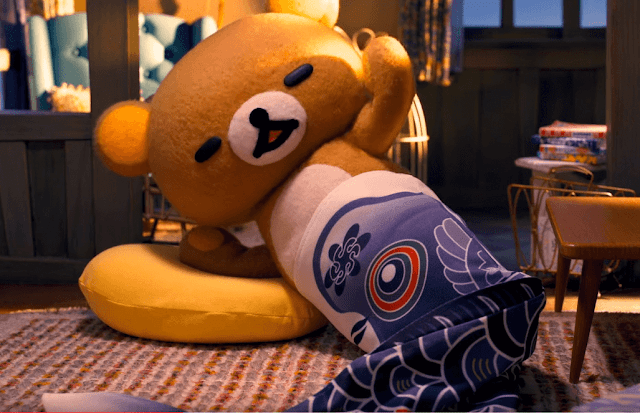 This love of characters is why Japanese video game companies have so many of them – Nintendo has a stable of hundreds, while Bethesda has so few that it keeps rolling out that ugly Fallout cartoon dude. It’s why Crypton ended up with an international superstar in Hatsune Miku because they felt the voice software that could sing lyrics was a little esoteric in itself. Taken to the furthest extremes, it’s why Japan has an entire industry of companies that exclusively make and market characters. Sanrio is the biggest – it has Hello Kitty. San-X is the up-and-comer. It has Rilakkuma.

Before Netflix’s Rilakkuma and Kaoru, Rilakkuma’s presence was largely exclusive to merchandise (everything from stuffed toys, to school notebooks, through to condoms), and a couple of web animations. For his first step into proper celebrity, Netflix backed dwarf – one of Japan’s premiere stop animation studios, and dwarf delivers on absolutely every level.

Each of the 13 episodes in the first season represents one month of the Japanese year – with an additional episode to wrap things up. Some of these months have traditions that are more obscure to the west than others. For example, almost everyone knows that there’s a cherry blossom season, but fewer people are aware that there’s a month that’s rather famous in Japan for people buying up gym equipment and getting right into their fitness (and no, it’s not in the leadup to the summer so people can get their “beach bodies” ready, as we do in Australia). Whether you understand the cultural context that means the “ghost” episode happens in the summer rather than at Halloween, though, the structure of Rilakkuma and Kaoru still does a good job of establishing the time frame at a year, when each episode is only 10 or so minutes in length. 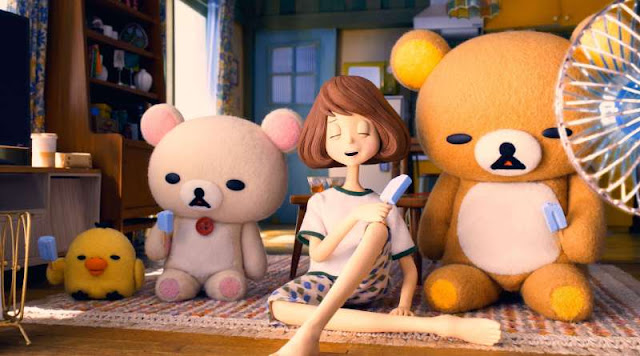 A lot gets packed into those 10 minutes. Kaoru is something of a sad, common figure – a salarywoman with no partner, a tight financial situation, and the sense that her family and co-workers are all moving on in life, leaving her alone and alienated. It’s a common enough sense that Japanese feel, in a country where the dream of stable work in healthy businesses with steady job advancement for life is steadily eroding by the socio-economic climate leaving few of those lifestyles still viable. Incidentally, it’s an issue that San-X’s rival, Sanrio, explores with its own show, Aggretsuko (also on Netflix), but in a very different way. Aggretsuko is about a panda character that vents her frustration with her lot in life by hitting up karaoke bars to blast out metal music. Kaoru finds her grounding in her relationship with the child-like Rilakkuma, the white bear, Korilakkuma, and the chick, Kiiroitori (all of whom occupy her apartment for reasons that never need explaining).

Rilakkuma and Kaoru has a heavily sentimental tone, as a result, without it being heavy-handed. Rilakkuma, Korilakkuma and Kiiroitori can’t actually talk, so the relationship is built more through the interactions, with Kaoru acting as a voice for all four where necessary. This is clever, since the actual character of Rilakkuma would be compromised if the creative team were to give him a voice – San-X’s vision of him was very much that of a largely mute blank slate.

So we have scenes, such as a summer festival where Kaoru’s three friends all immediately pick out their special seasonal snack, and Kaoru ruminates on her indecisions through life under the spectacle of fireworks. In winter, Rilakkuma gives a beanie to a snowman, thinking that he looks cold, only to have a feverish dream in which he’s dancing with the snowmen at night… and wakes up at the end of the season to find the snowmen melted, with his beanie neatly folded and left at the front door. The lesson there being that nothing lasts forever, of course. These lessons are more sweet than sad, but given that this show is principally pitched at children, it goes some way to show a contrast in how Japanese children are reared and the lessons they learn when compared to the bombastic education we bring to kids in the west. 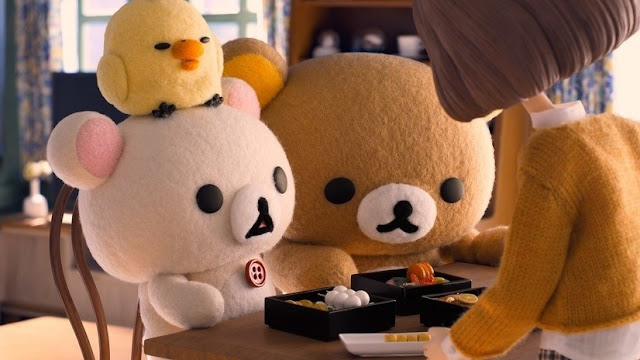 While Rilakkuma and Kaoru is certainly pitched towards a younger audience, it’s the right kind of children’s education, which is not patronising, and anyone can appreciate. The characters are adorable, and dwarf’s utter mastery of stop motion imbues every frame, second and minute of the show with rich personality and characterisation. The quality of the production is up there with the likes of Aardman at its best – only this one uses felted-texture toys rather than clay.

Really, my only disappointment with this show is that it’s missing Kogumachan. About three years ago San-X introduced a baby bear (Kogumachan) and honey bee character to the group of characters, and Kogumachan is popular. I walk into the Rilakkuma goods shop near Tokyo Station and the crowds grabbing at Kogumachan stuff is always the biggest. I can understand why dwarf instead introduced a few new human characters for Rilakkuma and friends to bounce off, as that human connection is important to subsequently connect to the audience (Kaoru, and all the other human characters, are new to this animation), but I hope there’s a second season to this animation that gives dwarf the opportunity to introduce the rest of the character mascots. From a fan’s perspective, that stiff is genuinely important.

That’s such a minor gripe against such an impressively charming and sentimental show. I had actually been debating whether to keep my Netflix subscription. Following the announcement that the show was dropping all of its Marvel stuff, and with House of Cards well wrapped, Netflix in Australia is not doing a good enough job with the movie library to compensate. But I’ll keep it now. Even if it’s just to watch Rilakkuma and Kaoru again at some point down the track, that show’s purity and good faith is such a rarity these days, that I’ll want to have access to this when I’m having a blue day.

The Doraemon farming game is actually getting an English release!