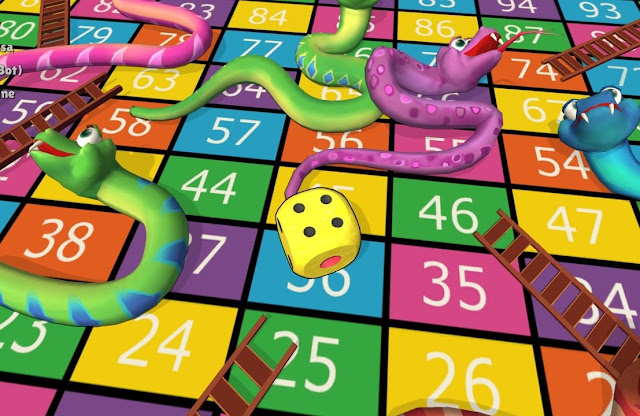 Some developer decided to release Snakes & Ladders on the Nintendo Switch at the same time that Nintendo released its own 51 Worldwide Games (or Clubhouse Games, depending on where you are in the world). That was a very silly thing to do. Sure, Snakes & Ladders is a classic board game that just about everyone on the planet is aware of, but it’s also a rendition of just one game against 51 similar classics, and it’s expensive at about one-sixth of the price of Nintendo’s thing, rather than the two per cent that it should have been. Also, and I can’t make this clear enough; Snakes & Ladders is a terrible, terrible game.

Terrible as it is, though, it is also a deeply honest game. Let’s get philosophical here for a moment. Whenever you set out to play a game, the conclusion of that game is already set. You – and the other players – don’t know it yet, but at the end of the game there’s only going to be one winner, and there’s no going back to change that once you’ve arrived at that conclusion. Effectively, that result was always going to happen. Yes. Determinism. There’s only one possible answer to any game that you ever play, and the act of playing the game is really about learning the result.

Most games try and convince you otherwise. They tell you you’ve got a chance through their mechanics. They’ll act as though you’ve got choice, but really those choices are all part of the cause-and-consequence that is going to lead to the eventual result. Which, again, you don’t actually know at the start, but since we’re all set on a linear timeline, it’s always going to happen. Snakes & Ladders is not like these other games. Snakes & Ladders is refreshing in that it doesn’t bother with that pretence. You’ve got a board. You roll a dice. You move a set number of squares. That’s it. There’s no agency in there to do anything else. You may land on a ladder, getting a short-cut. You may land on a snake and get thrown backwards. But there’s nothing you, the player, can do to make those outcomes more or less likely. Snakes & Ladders is a deeply honest acknowledgement that you’re along for the ride and simply following it through to its inevitable conclusion. 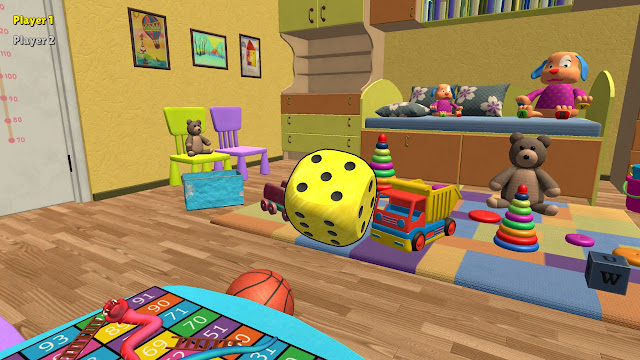 Perhaps my favourite thing about this Snakes & Ladders game on Nintendo Switch is that it lets you play against “AI”. You can select a single-player mode, which pairs you against one “AI” opponent, but it doesn’t need to “think”, since all it can do is exactly what you do on your turn: roll a die and move that number of squares indicated. About the only variation in the experience, whether it’s your turn or your opponent’s is that it’s possible to roll the die off the board and table and have it hit an empty chair or land on the floor, but amazingly you can’t actually control how you roll that die. You press a button and the die rolls itself. If you get the excitement of watching the die fall to the ground, it’s pure randomness. Now is that a case of the developers being aware of the deterministic philosophy of Snakes & Ladders, and deliberately restricting the one sensation of agency you have in the game in order to drive home that theme… or is it just lazy programming? You be the judge.

If only one opponent isn’t exciting enough, you can up the number of players to a maximum of six and, fascinatingly, you can make them a mix of bots and human players. Why they did this I have no idea since you can just set the game to six human players, roll the die for each of them, and the experience is exactly the same as having five of the six pieces controlled by bots. In fact, controlling all the pieces is slightly superior since at least you get to push the dice button more often.

Snakes & Ladders isn’t just philosophical about the determinism stuff, mind you. It’s also existentialist… or at least it will lead you headfirst into a crisis. For most players it will set in at about the point that they hit square 50 (of the 100 squares on the board). You’ll start to question why you’re playing this. At first the questions will be restricted to the game itself, i.e. “why am I playing Snakes & Ladders?” Because Snakes & Ladders is such an objectively terrible game, that’s a perfectly reasonable question to ask. But soon enough your thinking will expand. You’ll realise that all games are like Snakes & Ladders. You go through the motions as you play them with your sights firmly on the goal, and that journey will have its ups and downs, but ultimately just what are you doing? You’re moving a little playing piece from one side of the board to another. Then you’ll ask yourself what is really being achieved here? Those are harder questions to answer. In being such a terrible board game, Snakes & Ladders ironically subverts the entire gaming medium, laying bare the fundamental pointlessness of it all. 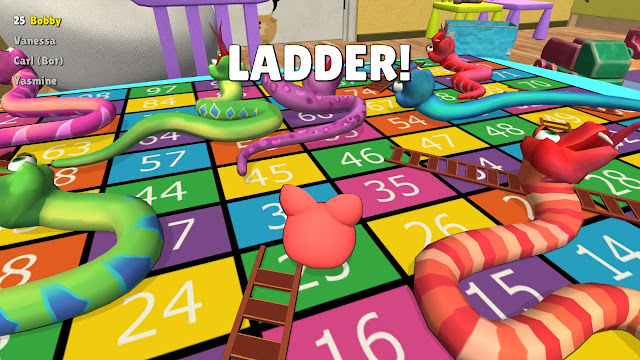 And then you’ll hit on the real galaxy brain realisation; you’ll look closely at that ugly rendering of a board, and you’ll realise that with the board that this version of Snakes & Ladders uses, if you roll absolutely perfectly – 6’s with every roll – you’ll make great progress and even land on one ladder that will promote you far up the board. You’ll be feeling top of the moon. Then, on your 13th roll, you’ll get to one square away from victory – square 99, but since that square is occupied by the worst snake on the board, you’ll be sent back to squares in the 40s. That is your “reward” for “playing” the perfect game, and if you don’t find some deep philosophical implications in that – enough to make you miserable to the point that you just give up completely – then you’re not thinking hard enough. On the plus side, that’s the point where you’ll realise you’ll never play the cruelty that is Snakes & Ladders again.

It’s still better than Ludo, though.

You’ll be able to get the next Total War game for free!