Two Point Hospital comes across as more a nostalgic in-joke than an attempt at a proper simulation, and while I loved the old Theme Hospital as much as the next person, what made that game so memorable was that it also offered a tight, engaging, challenging simulation experience. Two Point Hospital has all the charm and none of the depth and, truth be told, I came away from this one feeling a little deflated, particularly after waiting for the console release for so long and seeing how successful the game had been on PC.

In Two Point Hospital, you run a hospital (funny, that). It all starts out simple enough – you need to build a reception desk to let people in, and then a GP’s office to provide a first diagnosis. Then you need to start adding the specialists on; you’ll want a pharmacist to dispense the drugs, a psychiatrist to cure the nutjobs that swagger around like they’re rock musicians, wards to treat longer-term patients, and a room with what suspiciously looks like a torture device, which is there to cure people whose heads had been turned into light bulbs. Those machines to that by removing the light bulb, and screwing a new head in its place. Yes, it’s zany, and that’s entirely the point.

Soon enough the hospital fills with buzzing energy. A GP’s room will have a lineup of people waiting for a diagnosis, because the doctor’s gone on a break and is playing minigolf in the staff room (I know it was a mistake to put that minigolf game in there). On the plus side you’re making a pretty penny on the side from that crowd, because the bored patients-to-be will be hitting up your news agency for the latest Stephen King book to read while they wait. Speaking of horror, elsewhere in the hospital a patient will tragically die, but rather than leave quietly, they become a ghost and start haunting all your living patients, leading to a big drop in the hospital’s reputation. You could get your janitor over there to vacuum the ghost up, but sadly, the janitor is currently dealing with a toilet that’s been clogged up with a real brick and… 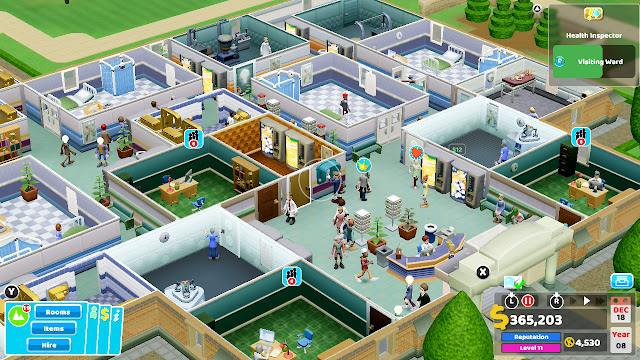 It goes on and on. Like most simulators, Two Point Hospital wants to keep you busy by stretching your resources and giving you a dozen things to monitor at once. What it gets right is the emergent storytelling – thanks to the gorgeous art and truly quirky characters I was fully invested in following the path of just about every patient that came through my doors. After building a backup GP’s office in a remote corner of my hospital to take the load off some of my other doctors, I realised that the patients being directed there were having a vastly inferior experience of my hospital, so I took a little corner space and made it lovely and comfortable with drinks and snacks machines and a bookshelf so they could find some reading material. It really was just for the patients of that GP’s office at that point in time, but as my hospital grew further and more rooms were added nearby, it become a nice little social hub for my sick people.

The other most significant management aspect of Two Point Hospital is the staff themselves. There are four types of staff you need to manage – assistants, who handle the reception and shop duties, the doctors themselves, the nurses (who manage everything the doctors don’t), and the janitors, which deal with the ghosts, upgrading technology as available, repairing machines, and braving the clogged toilets. Different staff have different attributes, with some doctors having terrible bedside manners, and some assistants being litterbugs, and they also have an experience rating, with the more experienced employees being better at their jobs (but also costing much more to hire and maintain). You’ll need to keep all your staff happy and busy, but this is all very prescriptive, since every room has one particular staff member to look after it, and as long as you’ve got a couple “on call” to step in when others take breaks, it’s not hard to make sure your hospital is working like clockwork.

Which brings me to the biggest problem with Two Point Hospital: I never felt truly challenged. I’ve been playing simulators for decades now, so there’s a certain familiarity that I have going in, but this one seems far too heavily weighted towards the absolute beginner. I had to deliberately make bad financial decisions to end up with a hospital losing money, and I rarely needed to make compromises. At worst, I had to wait a little while for my kitty to fill up, but I never ended up in a situation where I had annoyed staff and patients and my hospital’s reputation was sliding. Two Point Hospital feels like it’s on a permanent curve of accrual, and while it’s a joy to watch things grow, without consequence the reward ends up feeling hollow. 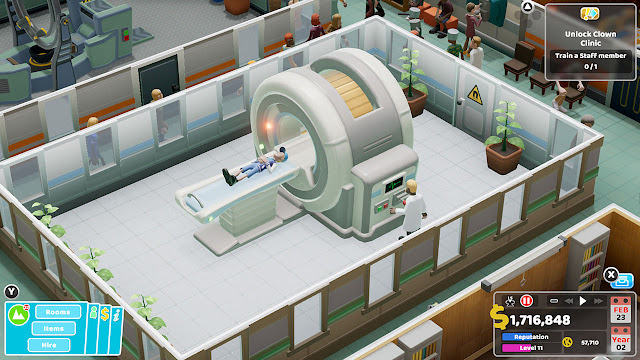 With 15-odd levels, it is possible deep in the game to make bad financial decisions, but by then even the most inexperienced simulation player will be familiar with the process enough not to make those. To contrast with another simulation that I’ve spent a lot of time playing in recent years – Project Highrise has nowhere near the production values of Two Point Hospital, but with that game you’re constantly in a war of attrition with the money that’s available to you, until eventually you pan the camera back and realise just how successful the massive city-in-a-building is that you’ve constructed. I never got quite the same sense of satisfaction from Two Point Hospital, and that’s simply because it usually feels like it’s throwing money at you to build more stuff.

Two Point Hospital is wildly entertaining, with a great sense of humour and production values that pop with light-hearted, satirical style. It’s worth playing through if for no other reason than to see what zany diseases and treatments you’ll need to deal with next. It’s just odd that for a game with such strong nostalgia for Theme Hospital it would neglect to recreate the challenge that was such a feature of those early-era simulators. Still, that’s me showing my age, I know, and I can’t imagine anyone failing to come out of Two Point Hospital with a giant smile on their face. If nothing else… it’s a great cure for boredom (okay, I’m sorry, really. In my defence, I did resist getting that stupid joke out until right at the end).