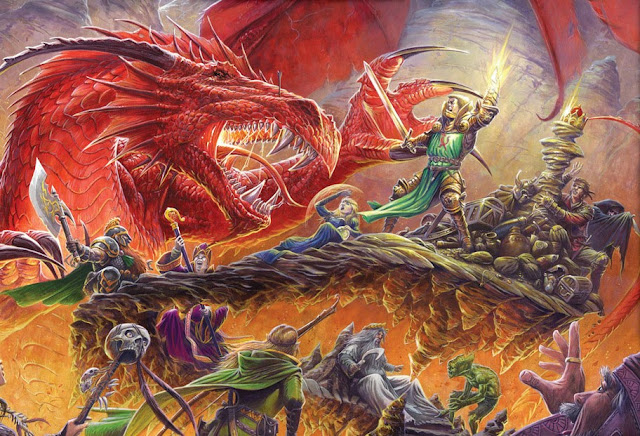 I previously reviewed Talisman when it released on PlayStation 4, and so I’m going to re-publish much of that review below, as it comes from the same developer, and is functionally the same game on Nintendo Switch. There’s even the massively expansive (and expensive) approach to DLC that the PlayStation 4 version has – there are no freebies with the Switch version. The base package is just the base Talisman game. There are then about $Aus130 worth of additional playing pieces and expansions to buy for the full experience.

Talisman is one of the most well-regarded board games out there. First released way back in 1983, the game was clearly designed to capitalise on the love of pulp fantasy that was washing through board gamedom back then, thanks to the success of Dungeons & Dragons and similar. It has persisted on in popularity, moving from Games Workshop, as the original publisher, to Fantasy Flight Games, and is now out there on shelves in its fourth edition. Truly, very few board games enjoy that longevity.

When it comes to the Nintendo Switch version of Talisman, the development team at Nomad Games have make a noble effort, but as with the PlayStation 4 version, this is a no-frills production that is only going to appeal to existing fans of the physical board game. There’s nothing wrong with creating a game for this audience, of course, but you only need to look at something like Armello to know that it’s quite possible to make a digital board game that does more than display a static board and pieces sliding across the screen. When you take the fully animated, vibrant approach as Armello did, your game can transcend the standard audience for this kind of thing, and introduce the world of board games to an entirely new audience. On top of the general “static” look of Talisman, the Nintendo Switch version suffers from the console screen being far too small to enjoy the aesthetics of the game; you can either play zoomed in to your playing piece (meaning that you can’t see the overall situation on the board), or you can play zoomed out and everything then looks tiny. You can switch between perspectives at will, but that’s tiring and you’ll settle into dealing with the zoomed-out view soon enough. 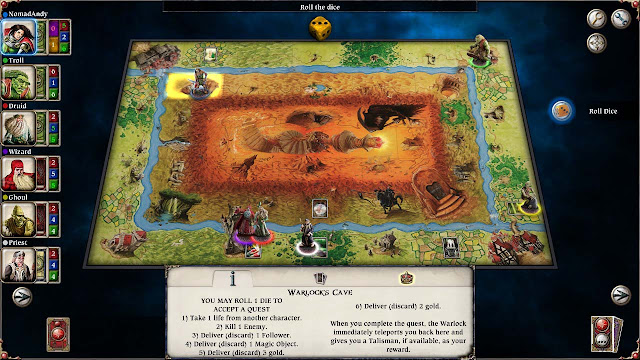 The basic play of Talisman can be summarised as a glorified take on Snakes and Ladders. Players are given a random character at the start of play (you can house rule that you can choose your characters instead), and that character’s goal is to reach the centre of the board and wipe out the other players before the same can happen to him/her. To do that you roll dice, move around the board and collect treasure or power that will help you survive the tougher challenges closer to the centre of the board.

At first, most players will spend a lot of time on the outside ring of the board, slowly collecting as many resources and as much power as possible. You’ve got complete control over movement, so you can move clockwise or counter-clockwise at will to try and land on specific squares. Each square has a different effect, though most of them involve drawing a card and playing out whatever encounter that might be. Some are combat, others offer loot. Some have positive effects, others negative. At some point a player will feel confident that they’ve accumulated enough power to take on the second ring on the board, which is like the first, but deadlier. The final ring, and the centre of the board, is just cruel, and players that are too hasty in trying to run into there are just asking for trouble.

The game itself is remarkably simple to learn how to play; most people will be up to speed with it in about half an hour. Actually winning at the game is another matter; one of the reasons that this board game has proven to be so enduring is that it’s not necessarily easy, and each character (which, remember, are designed to be selected at random) has its own strengths and weaknesses to master. A fighter is, unsurprisingly, good at the melee combat. However, a wizard has a near unlimited supply of powerful spells to draw on, which he can use to harass opponents, or give himself boons. Some characters are “evil” and need to be played differently to those that are “good.” My personal favourite is a Devil Spawn character who has control over the game’s many spirits and has a remarkably bad time when he lands on civilized spaces… well, that and the courtesan (an optional DLC character that you can purchase) whose ability is to seduce the pants off the other players. Nothing better than winning via wiles. 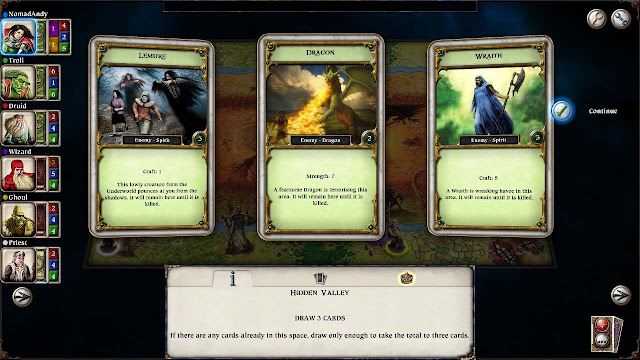 Talisman is a good time, in the way that other classic board games like Monopoly are a good time. But it’s not perfect. Talisman is, like its classic board game peers, a product of its time, and generally speaking the board game industry has moved on from what it offered. You know how Monopoly or Risk is somewhat out of favour now, and even the most casual of players is more likely to want to play something like Settlers of Catan or Dominion than Monopoly? It’s a bit like that with Talisman. The game’s biggest problem is its utter reliance on dice and randomness.

Dice are right out of favour with board game designers, who prefer to provide players with an environment where they can make calculations based on reliable information. Where a game introduces too much luck, then there’s far too little agency on the part of the player, and it can become a very unengaging experience when the luck of the dice rolls puts you out of contention early and you’re never quite able to play catch-up from there.

Talisman relies entirely on multiple layers of randomness; the dice rolls themselves, which govern movement and, more critically, combat (“the only way I can lose this is to roll a 1, and the monster roll a 6!…. oh”). On top of that, the card deck, in which is hidden most of the game’s loot, and danger, is astonishingly fickle. There’s nothing worse than wasting a half dozen turns drawing difficult combat and/or useless cards while your opponents are scoring good loot. 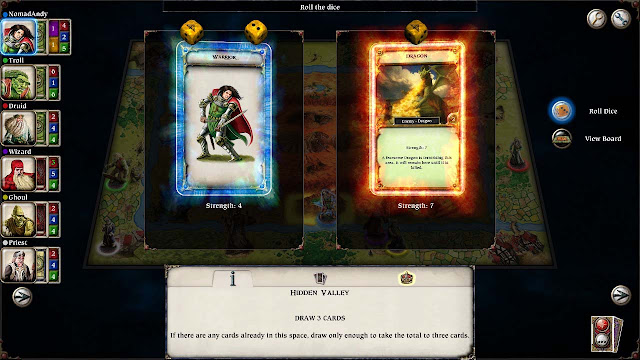 Because the randomness is so potent to the results in Talisman, there’s only so far that strategy can take you. Admittedly there is more room to be strategic than in a game like Snakes & Ladders, but it’s not by much, and over the years I’ve found Talisman to be a remarkably passive experience. It’s fun, but there’s no point getting involved when it’s really the dice that are going to determine what happens.

Talisman is a classic board game, and deserves respect for that. It’s also eminently playable to this day, and very easy to pick up and play, and as such it’s a genuinely good game for lazy Sundays with friends. But the Nintendo Switch port of the game suffers from the console’s limitations, and the utter reliance on luck can make this game a very frustrating experience over the longer term (and, as a quick side note at the end – games of Talisman can be long – be sure to have a pot of coffee ready as you sit down to play this one).

Marie Rose: The making of Dead or Alive’s doll-faced superstar