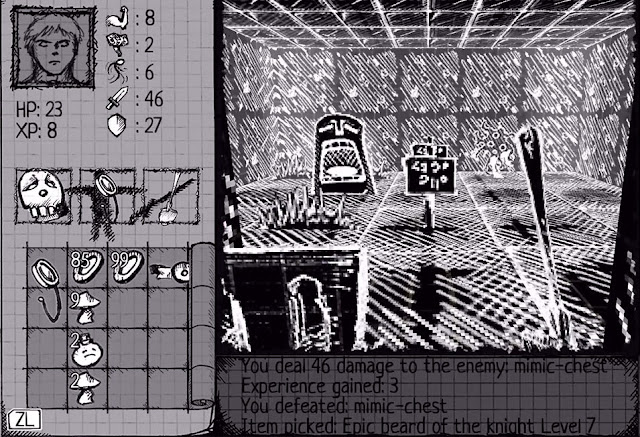 I did make a promise to myself that in 2020 I would try and play fewer games, but go much deeper on those that I did play. That would mean that I stopped giving so many poor or middling titles a go purely on the basis that they had intriguing premises. I started playing Drawngeon in 2019, so that’s my excuse because for me to stick to my New Year’s resolutions, this is the exact sort of game I need to avoid this year.

That’s a harsh thing to say when the development team behind the game must have been tiny, but Drawngeon’s biggest problem is that, while it does have a fun premise, it is so shallow that it gets dull almost immediately. It is, in theory, a roguelike, in that dungeon layouts are randomised with each new game, but across the entire gamut of what you’d expect from a good roguelike, this game manages to fall short, to the point that it becomes truly irritating.

Take for example the loot system. Dungeon crawlers are all about loot, and Drawngeon certainly fills the dungeons with plenty of chests too… but then makes the inventory tiny beyond belief.  If an object in a chest won’t fit in your inventory, the game won’t even tell you what that item is, so you’ll need to trek back to town, sell off whatever you’re carrying (filling your preciously limited inventory with coins that you don’t really need, since none of the vendors sell anything of worth), and then trek back to that treasure box. Most of the time you won’t find something of value, so you’ll go back and forth, back and forth, checking the boxes for that rare moment where a better item does land in your inventory. If there’s a more effective way to turn loot into such a dull process that it kills the joy of finding good stuff, then I can’t think of it.

My first review of 2020 will not be pretty #NintendoSwitch pic.twitter.com/CsUaVEkZcZ

Then there’s the skills system. Usually, levelling up in an RPG is one of the more satisfying moments, where you’ll see your character’s statistics improve and – usually – you’ll be able to exercise some control over that development, so that you can tailor your character to your preferences. Drawngeon’s “skill tree” is barely more than six different items, and the bulk of those are passive skills. You have three different character types to choose between, but none of which end up with inspiring skills to use – for the warrior, for example, one of the skills is the ability to raise your shield. Exciting!

Then there’s the combat. There aren’t that many enemies in Drawngeon, and none of them offer quality AI, so you’ll fight them all in one or two ways; either you’ll run up and trade blows with a melee enemy until it’s dead, or you’ll run around like a madman trying to catch up to a ranged enemy that moves faster than you and constantly ducks out of the way of your laboriously slow attacks. Eventually you’ll find a way to corner it and be able to kill it, but only after chasing it around in circles for far too long. In theory you could use ranged attacks of your own, but the equipment you need to play a ranged character fills up too much of that tiny inventory you’ve stuck with. With barely any effort in the narrative, Drawngeon really needed to get the level design and combat right. Being a roguelike means that the dungeons are randomly generated (and therefore lacking in design), and the combat is nowhere near strong enough to carry the experience. What’s left? Virtually nothing.

If the game has one saving grace, it is that art style. The hand-drawn aesthetic is pleasant and appealing, and instantly calls to mind the old grid-based SSI RPGs of yesteryear, combined with the pen-and-paper look. It’s like those books of grid paper that you used to draw dungeons into when you were playing Dungeons & Dragons back in the day had taken 3D form and come to life. There’s also a faintly unsettling atmosphere created through the high-contrast visuals and sparse, but moody background music. I can’t fault the concept for Drawngeon. It’s strong and shows that the development team do have a sense and love for nostalgic dungeon crawlers. The vision is clear, however much the execution struggles 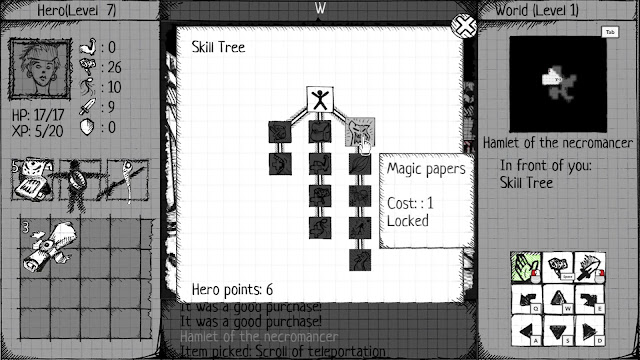 Future iterations or sequels fro Drawngeon could well see it become a series worth paying attention to. The strong hit of nostalgia, as well as the unique visual style, give the game a foundation much stronger than many of its genre peers. The execution is deeply lacking, though. The lack of variety in gameplay systems, and the completely unsatisfying approach to character development, leave Drawngeon feeling hollow and a grind within minutes, and that’s just not good enough.

Our Games of the Decade – Matt S.