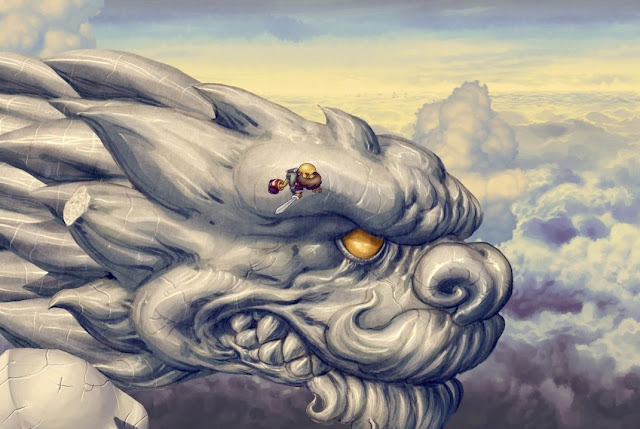 Earthnight, developed by Philadelphia based Cleaversoft, is one strange game. In a nutshell it’s kind of an endless runner, but it’s also a post-apocalyptic space dragon slaying action game, with procedurally-generated elements. For the most part, it doesn’t make a whole lot of sense. But it’s got hand-drawn artwork, a whimsical sense of adventure and is overwhelmingly positive enough that it’s hard to stay mad at it. Earthnight proves that there’s still unexplored territory in the autorunner genre, bringing enough charm to carry its simple mechanics a long distance.

Earthnight’s gameplay mechanics are as simple as they come. Your character automatically runs to the right, and they’ll need to jump, duck and weave through obstacles and enemies. You can control the speed at which your character runs a little bit, but ultimately they’ll keep hurtling forward all the same. Jumping is the main way you’ll interact with the game – enemies can be jumped on to dispatch them, otherwise you’ll be avoiding obstacles and collecting goodies as you go. There isn’t a whole lot of interactivity here though, as a consequence of the game being a part of the autorunner genre; occasionally the levels will procedurally-generate an impossible situation which will force you to take damage. The health system is merciful though, and it’ll be rare that you’ll leave any one run feeling angry or ripped off.

The mechanics make little sense without considering the game’s premise however. The story is that earth is under attack by giant long, Asiatic dragons which snake across the various atmospheric layers. Their invasion of Earth has forced the remaining refugees into space, where they’re planning a counterattack to reclaim the land. As one of two playable characters, you’ll need to freefall skydive from a space station, run all the way along a dragon’s back in order to reach its head, and stab out its eye in order to kill it. Then, fall some more, kill some more dragons, rinse and repeat. This means that each dragon is neatly one platforming level, and the further down into the Earth’s atmosphere you go, the more difficult and crowded the levels become. For some reason, the game’s currency is measured in litres of water, and this can be spent on unlocking upgrades to make your next run a little easier. 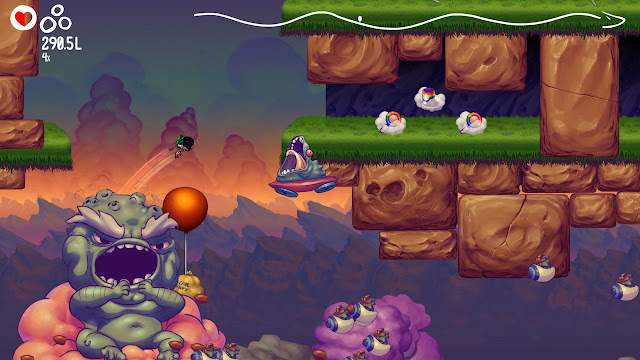 Once you’ve played a bit and slain a good variety of dragons, you’ll start to unlock powerups which spawn within levels. These can do things like block a hit from an enemy, or help you double-jump to better position yourself. These persistent upgrades help to alleviate the game’s randomness somewhat, and provide a sensation that you’re getting stronger and pushing deeper into the evil dragons’ plans, even if you’re not necessarily getting more skilled at the game.

One of the game’s stand out features is its hand-drawn artwork – characters, enemies and backgrounds look incredible, and certainly show that this is a labour of love. I particularly admire the way the dragons snake and spiral as you run on them, and once you get to the head, it moves and recoils just like a living creature. Unfortunately, the environments and enemies whizz by so quickly that it’s hard to properly appreciate the effort put into them; the enemies come in all sorts of weird and wacky designs but it matters little when the player is trying to avoid them.

The game’s chiptune soundtrack pairs with the arcade-styled gameplay excellently and makes for an overall frenetic experience. There are over twenty tracks which drive home the energetic and zany nature of the gameplay and story. At times, I started to feel that Earthnight’s gameplay was just a vehicle for the talented art and sound team though, since I would have appreciated being able to slow things down and take in the production values without being forced to sprint and kill dragons all the time. 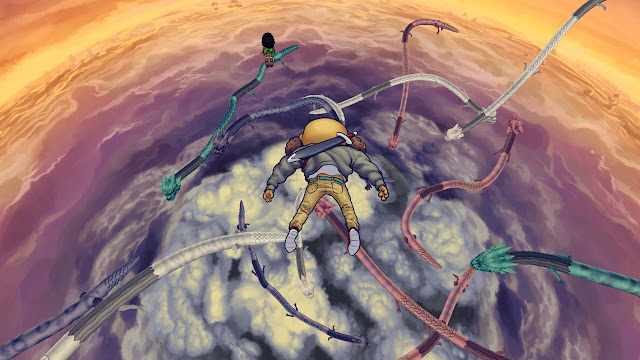 I think that perhaps it’s the trappings of the autorunner genre which holds Earthnight back from greatness. This is a game with wildly original ideas that kept me enthralled throughout, but I did keep wishing that it would slow down and give the player some time to breathe. Endless runners are fun and all, but they’re not the kind of game which encourages careful appreciation. For that reason, occasionally the artwork and gameplay clashed against each other (the detailed art doesn’t make for immediately readable game mechanics, the game mechanics detract from the detail of the art) and I felt that Earthnight was lesser than the sum of its parts. But then again, how many other post-dragon-apocalypse endless-runners is one going to play in their lifetime? If the premise sounds interesting, it’s worth checking it out.

Our Games of the Decade – Lindsay