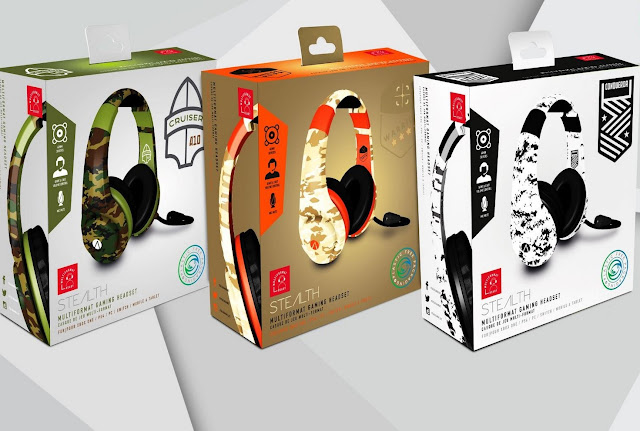 Putting aside my intense distaste for the camouflage aesthetic (unless you’re actively looking to hide from enemy combatants, you don’t need to look like a soldier), the Stealth XP-Warrior headset has really impressed me. For a budget headset it offers both clear sound and an excellent microphone, and those are, of course, the key priorities for any gaming headset.
It did take me a little while to get used to the mic, and to find the ideal place to put it. I’ve linked two videos below where I’ve used the Warrior to record my voice, and you can see from Death Stranding to the later Dead or Alive one that tweaking for optimal performance is important. But that’s okay, any new technology has a learning curve. The only real issue I had with the headset was the size of the headphones themselves. I prefer larger headphones that will cover more of my ears, and sit more lightly on my head. The Warrior was a little bit small, and shaped in such a way that it feels a little tight on my head. It’s not to the point of being uncomfortable, but in comparison to some of the more premium headsets that I have used over the years, there’s a definite sense that Stealth didn’t go all-out to make this a headset designed to be equally comfortable for everyone.
With that being said, I still loved using the Warrior, because it’s both easy to use, and offers high quality sound for a mid-range product. The headset uses a standard 3.5mm jack, for a start, meaning that the headset can be used across just about everything – PC, PlayStation 4, Xbox One, Nintendo Switch, mobile… the works. I know that specially-designed headsets for specific devices (such as USB headsets for PCs or consoles) allow the manufacturer to include additional features and a deeper level of integration, but for the most part, and in 99.99 per cent of applications, I just don’t want that. I want a headset that I can plug into any device and play. I won’t take the Warrior outside of the house (on account of the aesthetics), but I have carried it around while indoors for the last couple of weeks, and it is both lightweight and convenient for every day, general purpose use.
The 40mm dynamic speaker drivers do a generally good job, particularly with playing clear voice and melody music. If you’re looking for the deep bassy surround sound experience, then you’re probably better served elsewhere, but budget headsets never offer that kind of experience, and the Warrior is no worse than some of the others I’ve tested. Having good, clean sound feedback was particularly beneficial for the video recording and editing, which is where I immediately found the best value in the Warrior. The mic picks up voices nicely, while doing an adequate job of blocking out ambient noise. I need to turn the fan off, and hope no helicopters fly overhead as I record, but in most instances being able to simply plug the mic into the PlayStation 4 controller and know that it will work is all that I’m looking for.
There’s a simple control panel located midway down the cord that gives you the most basic tools – the ability to mute the mic, and adjust the sound within the headset itself. This unit doesn’t feel as cheap and clumsy as with some other budget-ranged headsets, and as a result it’s not as fiddly to use. You wouldn’t want to put the headset through much of a stress test overall though, because – and this is entirely reasonable for the asking price – it does feel very plastic-y in the hands. It is a nice plastic feel thanks to the rubber oil finish, but even if it wasn’t laboured with the camouflage aesthetic, I wouldn’t be taking this thing on airplanes or holiday trips, simply because it doesn’t look like it would be up for wear-and tear. The mic is not removable either, which is another cross against it for outdoors and social use.
You can find this headset for $Aus40 if you shop around, and with keeping that firmly in mind, the Stealth XP-Warrior is a really nice headset choice. Christmas is coming up, and it makes an ideal stocking filler, either as a secondary, general purpose headset, for when that’s really all you need. Does it compare to even the mid-tier headsets? Not really. The cheaper build and non-detachable microphone are limitations, but assuming that you don’t mind walking around looking like you’re trying to hide your ears and a small band across your scalp from enemy mortar fire, the sound quality that comes through the speakers, and the ability for the mic to pick up and deliver clear voice, makes it inherently useful, even for people who already have more premium options.