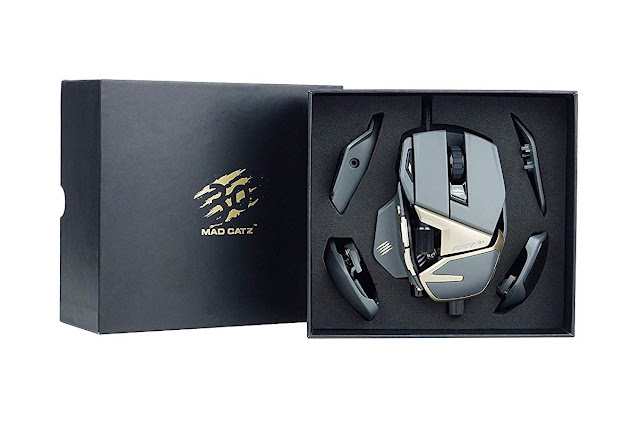 Mad Catz turn 30 this year, and it has a present for you. Admittedly, it’s the kind of present that you have to pay for yourself, but a present is a present, right? Especially when the it comes in the shape of their high-end RAT 8+ mouse, lovingly wrapped in a smart gift box and available in a strictly limited edition of 1000 units worldwide.

The birthday edition of the RAT 8+ comes in a pleasingly understated gold-and-grey finish, but if you don’t feel like celebrating then you can get the same core functionality from the (widely-available, and slightly cheaper) all-black standard edition. Even so, both versions are top-end mice, and they have a premium price tag to match.

Heading up the feature list is a top-of-the range Pixart PMW 3389 optical sensor, capable of an impressive 16000 DPI. A few years ago that would have been overkill; these days, with ever-higher resolutions becoming commonplace, it’s a sensible value that should future-proof the mouse for years to come. As well as allowing you to set the sensitivity of the x and y axes independently, Mad Catz’ software also allows comprehensive adjustments to how the sensor performs. These allow you to calibrate the device precisely to your gaming surface, change the lift-off distance and, most intriguingly, change the rotax. This last feature compensates for the angle at which you physically hold the mouse, reducing any vertical movement when you make a straight side-to-side sweep. We’re probably in niche territory by this point, but it’s still a fun little feature that could make a difference for competitive players. 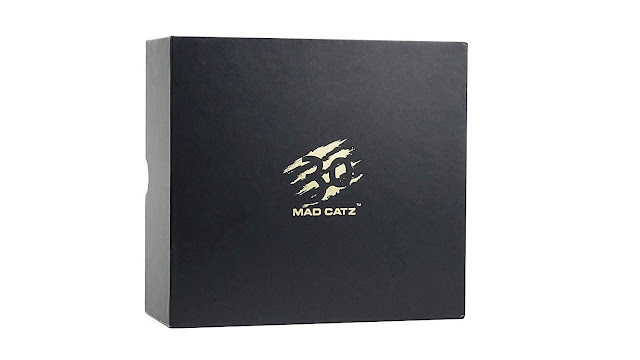 An arguably more significant feature is this mouse’s quite ridiculous level of physical customisability. As well as allowing you to adjust the feel of the device by adding or removing up to three on-board weights, it’s also possible to adjust the length of the palm rest , change the position of the side buttons relative to your thumb, and even widen the mouse by changing the angle of the thumb-rest. Both versions also come with extra palm and pinky rests which you can swap in to customise the mouse still further.

As we saw with the STRIKE 2 keyboard, the build quality of Mad Catz’ current product range is exceptional. The RAT 8+ looks solid and it feels solid. One consequence of this is that the mouse chassis weighs in at a chunky 145g. This is about average for a gaming mouse, but it’s heavier than most previous-generation RAT products, so Mad Catz veterans who prefer a super-light device might want to choose another mouse from the current range instead. Nevertheless, the RAT 8+ has a general feeling of quality all round, and the understated 3-zone RGB lighting makes this feel like a grown-up device with a touch of class about it.

Historically, Mad Catz’ gaming software was never their strongest point, but the latest iteration covers the basics nicely. It’s a simple drag-and-drop interface which allows you to program the mouse’s 11 user-definable buttons with whatever combination of macros, keystrokes or functions that you please. These definitions are then stored as one of four profiles which can be toggled with a dedicated button on the mouse. While it’s not possible to auto-launch profiles along with a game executable, the software gets the job done well enough. 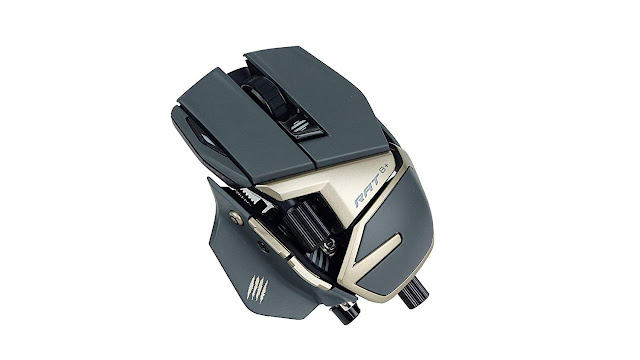 I tested the RAT 8+ with a range fast-paced games and, as you’d expect from such a highly-specced sensor, everything felt crisp and accurate. Even better, the RAT 8+ continues the series’ legacy of being comfortable to use. The adjustable design suits all play styles; users who prefer a palm grip can extend the base plate and stick in an extra weight, while fingertip and claw-grippers can squish everything down to create a small and manoeuvrable device. Even so, I’d prefer some of the adjusting mechanisms not to stick out quite so prominently from the case, and I found the position of the thumb trigger button to be just a little too far forward for easy reach. However, it didn’t take long before I’d found the exact ergonomic configuration to suit my play style, and I was quickly blasting away with my customary lack of skill. I can’t say with any certainty that the RAT 8+ has improved my game, but at least I know that it’s not the mouse that’s to blame.

So, happy birthday to Mad Catz. The brand continues to go from strength to strength. Judging by the devices we’ve seen lately, the current offerings hit precisely the right combination of quality and innovation, and the Limited Edition RAT 8+ mouse makes a fine ambassador for their revitalised product range. It’s an excellent mouse, and one that’s well worth celebrating with.