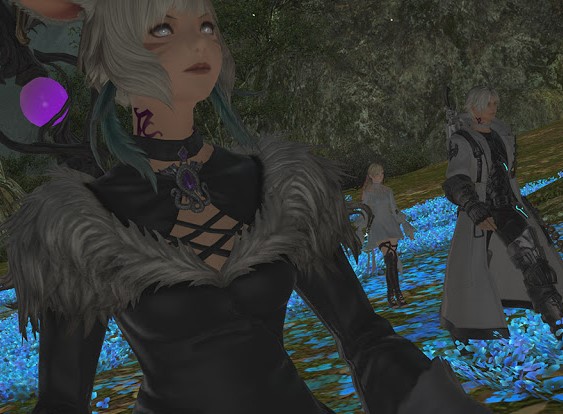 Being an MMO hasn’t stopped Final Fantasy XIV from delivering one of the best stories we’ve seen from the Final Fantasy in a long time. This much has been at least since the game’s relaunch in 2013, and each new expansion has taken it from strength to strength. Indeed, you can just about ignore the MMO elements if you so desire and just play it like a new single-player game, with all the highs and lows, the colourful characters, and the humorous touches you’d expect from one of the main games.

Having finally finished the main story of Shadowbringers, I can say that it delivers one of the most compelling narrative arcs the game has seen yet. I talked a bit about this last week, but to recap, the new expansion sees the Warrior of Light (that’s you) and the Scions of the Seventh Dawn (the main NPC heroes who hang around with the Warrior of Light) transported to a sort of alternate dimension called “The First”.

Until now, Final Fantasy XIV has mostly equated the elements of Light and Dark with good and evil, respectively—hence the whole “Warrior of Light” thing. But what the worlds really need are for the elements to be in balance, and Shadowbringers’ new dimension shows that even Light, in overabundance, can be trouble. A hundred years before your arrival in The First, a flood of light destroyed most of the world, and what’s left is bathed in a blistering, eternal daylight. The survivors live in fear of “Sin Eaters”—creatures that, despite their angelic appearance, are nothing more than vicious monsters who’ll kill on sight. 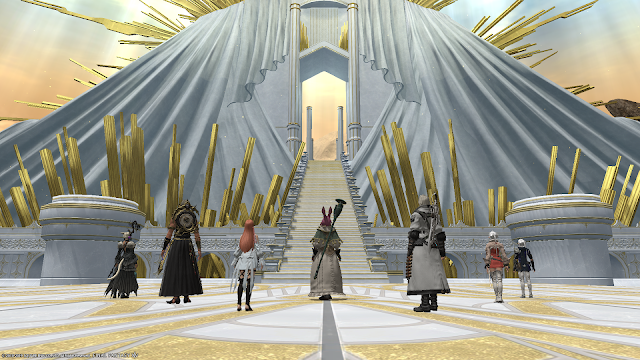 This lays the groundwork for a classic Final Fantasy story, as you travel from place to place, helping out the locals and fighting back against the Light by slaying the Sin Eaters’ ring leaders. Each victory brings the night back to an area of The First and hope back to its people—something the Warrior of Light is all too familiar without, only now people whisper about the heroic deeds of the Warrior of Darkness.

But there’s more to Shadowbringers’ story than just an inversion of the classic story of light versus dark; it’s also the expansion that finally lets us learn a little bit about who the Ascians really are. Until now, these immortal sowers of chaos have been shrouded in mystery; all we really knew is that their existence seemed to transcend time and space, and that wherever Ascians go, trouble always follows.

But through one Emet-Selch and his tenuous alliance with the Warrior of Darkness, Shadowbringers offers us a bit of a glimpse into how the Ascians fit into the history of the world, and what it is that they’re trying to achieve beyond just wanton chaos. It also leads to one of the most refreshing new zones Final Fantasy XIV has seen; I’ll say no more than that, but suffice to say it’s not like any other area the game has seen yet. 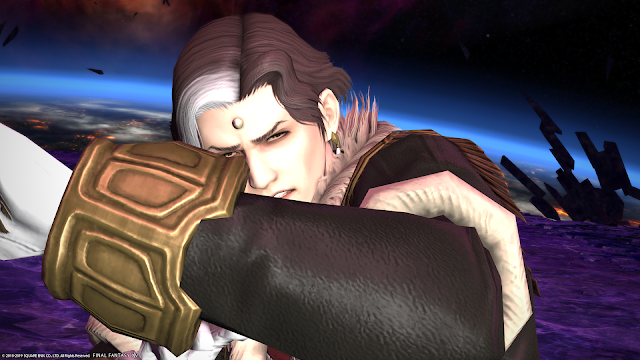 Plenty of familiar faces return with their own new arcs, too. Much of the story centres on Thancred and his childhood friendship with Minfilia, and Minfilia has a bit of a presence (though it’s probably not what you’d expect). Alphinaud and Alisaie bring their usual blend of comic relief, introspection, and sibling rivalry, while Y’shtola and Urianger now sport new jobs, respectively. I was honestly a little concerned the first time I saw Y’shtola as a Black Mage in the trailers—she’s easily my favourite character in the game, and her White Mage persona was part of that—but she steps into her new role perfectly.

Final Fantasy XIV has always been more story-driven than your typical MMO, and Shadowbringers takes that one further with a new feature: the Trust system. Until now, you could mostly play FFXIV like a single-player game if all you were interested in was the story, but you’d still have to engage in the multiplayer elements of the game—dungeons and the like—from time to time in order to progress things.

Shadowbringers still makes team-based dungeons a regular part of the story progression, but with the Trust system, you have the option of tackling them with NPC companions instead of other players. If you want to, you can play through almost all of Shadowbringers’ story without ever having to directly interact with other players—some might say this defeats the point of playing an MMO in the first place, but it’s nice to at least have the option. Sometimes you don’t want to deal with the social element and just join a group of AI adventurers instead. 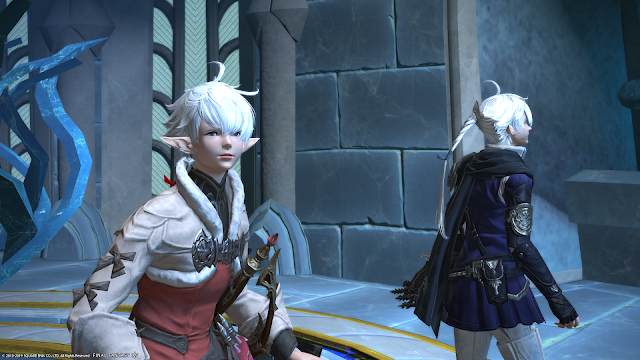 My only wish is that it extended to 8-player duties as well. There are three encounters that you have to complete as you make your way through Shadowbringers—this expansion’s equivalent of Primal fights—that can only be done with other players. On one level, it’s understandable; they’re more complicated encounters than your typical dungeon boss that require a bit more party coordination. But it does feel like a missed opportunity: why make the main story almost completely playable solo instead of finding a way to make those other story bosses work with the Trust system as well?

Luckily, though, none of them are too difficult, so even if you’re only here for the story, know that you won’t have to spend too much time dealing with other players. Regardless of whether you choose to solo as much as possible or party up the whole way through, Final Fantasy XIV: Shadowbringers delivers an exciting new narrative arc that’s sure to keep you on the edge of your seat, right through to its eye-opening conclusion.

(Stay tuned! Next week I’ll be back with some thoughts on the new jobs and new post-game stuff Shadowbringers has to offer, including the new Eden raid series!)