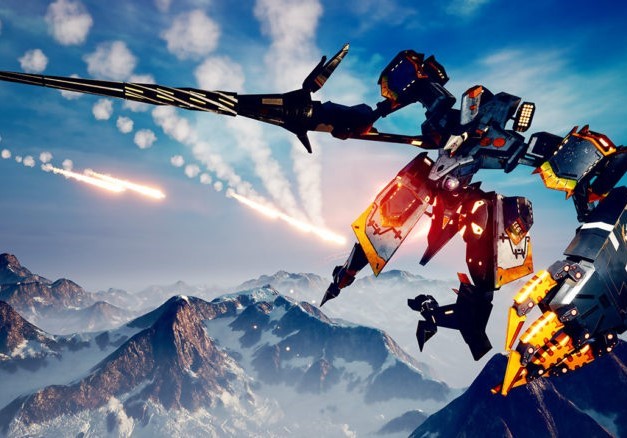 I’m always excited when I hear a new mecha game is getting released. Although I’m not the most well versed in the anime genre, I know enough about the various official and unofficial attempts to translate Japan’s giant robots into an interactive medium. They’re almost always passion projects, designed in a fascinating way. And Project Nimbus, developed by Thai collective GameCrafterTeam and supported by an international squad of Japanese and European localisers, is a passion project through and through.

The reason I find mecha games to be so interesting is because the giant robots largely predate the advent of gaming: the manga to codify mecha, Go Nagai’s Mazinger Z, was released in the same year as Atari’s Pong for the arcades. Ever since the idea of pilotable robot war machines have captured our imaginations, game developers have been playing catch-up ever since. We’ve seen action games, turn based strategy games, first person shooters and visual novels, but each mech game has been trying to give the player the feeling of being at the helm of one of these giant war machines. Now when you consider the full experience – six degrees of freedom flight, a varied arsenal of weapons, battles in dense cityscapes and outer space – and mecha suddenly becomes an expensive genre to develop for indeed. There are no cash grabs or half-hearted attempts here. A mecha game is going to be a battle, fought with the skill of the developer, to try and cram a wealth of imagination and fantasy into a manageable set of game mechanics.

This is why I admire Project Nimbus so much – despite its tiny budget and development team, the result is fairly faithful to the vision of mecha anime. The game is very combat focused, but all the classic weapons are there: machine guns and beam cannons, energy swords and salvos of homing missiles arcing in mesmerising patterns a-la Macross. There’s a delicate balance at play. 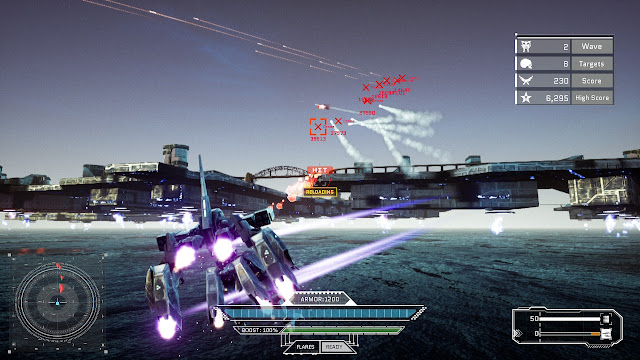 The gameplay focuses mainly on aerial skirmishes similar to what you’d find in the Ace Combat series, but with six degrees of movement rather than jet controls. Your robot’s feet will conveniently always point towards the ground, so you won’t need to worry about any disorientating acrobatic manoeuvres, and you’ll be free to dart around the battlefield with an intuitive boost system that’s generous with its juice. Understandably for a game of this scope, the controls do get a little cramped on occasion. Managing the six degrees of movement alongside real-time weapons switching is hard, and if you’re playing in handheld mode or with a pair of Joy-Cons it’s likely you’ll get a hand cramp after a while, switching between both sticks and both sets of face buttons while holding down triggers.

All the weapons do feel impactful – this is a power fantasy after all – but they also fit neatly into the game’s difficulty curve. Each weapon has a distinct use, as well as a notable drawback, and the best part of Project Nimbus is that you’ll eventually develop your preferred play style – a signature way of piloting your mech just as the protagonists of manga and anime do. Whether you decide to stay back and snipe foes with a slow-recharging railgun, or dash erratically through swarms of missiles while brandishing a sword, you’ll do so while feeling like the protagonist of an anime or manga: in tune with their machine, and expressing their personality in the way that they fight.

This is perhaps the only way I can justify the game’s drawback – a lack of customisation options for your robots. Although there are lots of weapons available, each with their own nuances, you’ll only ever be able to fly pre-made robots, regardless of whether you’re playing the game’s Campaign, Survival or Warfront modes. Project Nimbus eschews the style of design that has you scavenging for spare parts and cobbling together a bot with the armaments of your preference – instead you’re given something prefab and challenged to make it work. 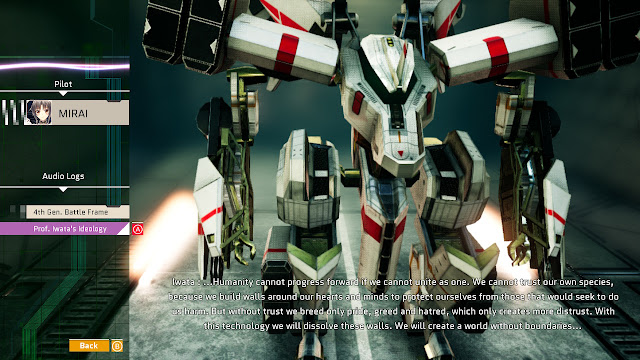 This at least makes sense in the game’s Campaign mode, which sees players tackling a variety of combat missions while advancing scenes of a surprisingly complex narrative. The premise is that in the far future, after Earth has been decimated by a nuclear war, human colonies have been launched out into orbit and conglomerated into three main factions – the UCN and CFN, superpowers led by the United States and Russia, respectively, who are locked in something of a cold war, and the terrorist organisation Children of Fallen Nations who seem intent on amassing military power and goading the two superpowers to fight each other.

This is Real Robot genre through and through – the characters talk about their mechs as mass produced, assembly line war machines with the exact same seriousness that a real-world commander would use, talking about tanks or fighter jets. If political intrigue is up your alley and you can stomach more than a little passing similarity to various Gundam and Macross anime plotlines, you’ll definitely enjoy this one. They’ve even recruited voice acting in both English and Japanese, for the full experience.

The Cold-War-esque narrative lends well to the game’s mission format, which is more focused on skirmishes between small groups of mechs rather than all out war scenes. The game will take you through a variety of locales and different mission styles, and the objectives are varied enough that they don’t feel stale even after the lengthy run time. It helps that the campaign constantly switches perspectives between the various factions, and each one has a slightly different design philosophy with their robots. One mission you’ll pilot something that’s got a deadly machine gun at close range, and in the next you’ll be protecting weaker mechs with your long range cannon. 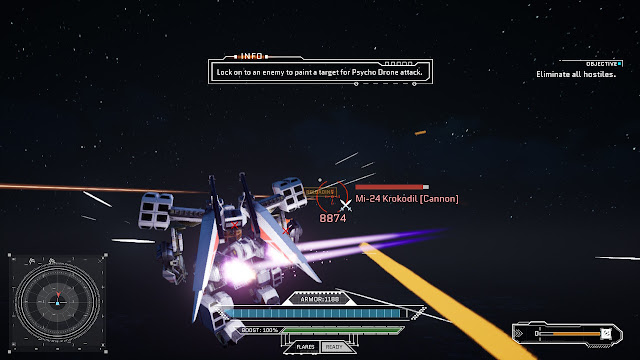 Once the campaign’s over, players can test their skills with two additional game modes – Survival and Warfront. Survival is simple enough; kill waves of enemies for as long as you can – but Warfront is an interesting mode that’s comparable to the “Career” mode of sports games. In it, you can choose a robot to pilot from a hangar and slowly upgrade its capabilities after taking on increasingly difficult missions. Although you’re not able to customise exactly what you’re armed with, the small upgrades provide an RPG-progression that the main Campaign is sorely lacking.

If you’re okay with the lack of customisation options in the main game, then Project Nimbus will be a more than competent mecha game to tide you over until the release of Daemon X Machina. GameCrafterTeam have poured the entire team’s love and effort into this aerial action game, and the love for the source material really shows. While it necessarily won’t convert people who aren’t used to the genre, there’s plenty here to entertain those with a familiarity with the Real Robot genre – playing Project Nimbus feels just like geeking out about the latest anime series with some like minded friends, and that’s always a plus in my book.