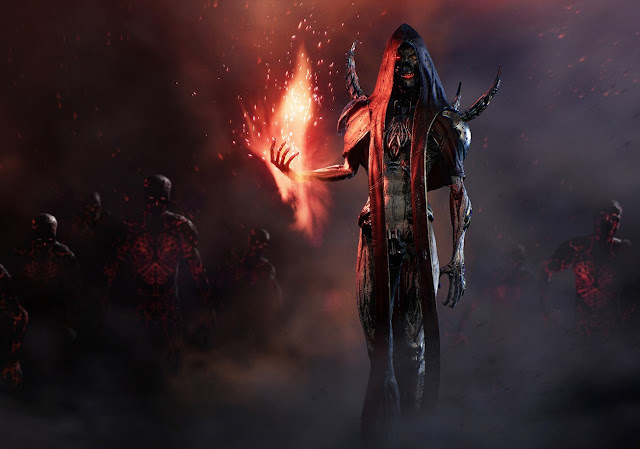 Golem Gates is what happens when a developer takes every popular fantasy game design, and tries to mash them all together. It’s a RTS with levels laid out like in a MOBA, in which you summon cards and spells as you would in a CCG. Throw in the hammiest narrative and attempted grimdark setting imaginable and you’ve got something that comes across as thoroughly desperate. Thankfully, the game underneath is good fun.

The biggest problem that the game has on Nintendo Switch is the controls. Though levels are small in scope, they’re structured so that there will generally be action going on at a couple of different points on the map at any given time. Unfortunately, the cursor scrolls so slowly that it’s clunky and clumsy to shift between groups of soldiers, and once you get there, there are too many inputs to fumble through. Furthermore, it’s incredibly difficult to make out what is going on, so activating character’s special abilities, manoeuvring weaker units (like healers) out of the way, and so on, is too fiddly to be workable. I know that combat is a chaotic affair, but in video games, that doesn’t make for particularly engaging gameplay. Most of the time my successes came from simply throwing everything at the enemy and hoping that that my swarm would be bigger and stronger than my opponent’s.

You can build turrets and things to help you in the defensive play, but the game is heavily weighted towards offense. On the other hand, you can have a range of offensive spells to use, but the number of exceptions that will block you from using those spells is ridiculous. It seemed like every time I was trying to cast a spell, either the enemy was “out of sight range” (because units and turrets have tiny sight ranges that is often less than the attacking range of the enemy) or “the enemy has tech shield,” and in both cases I couldn’t cast the spell at all. Then, when I did get units close enough to cast these spells, I discovered to my great detriment that friendly fire was a thing and I’d often do more damage to my own side. What’s the point of giving you powerful destructive spells if the only way to use them involves destroying your own side as well? There’s a lot in Golem Gates that doesn’t feel like it was particularly well thought through in concept, which is a problem when it’s trying to juggle so many balls at once. 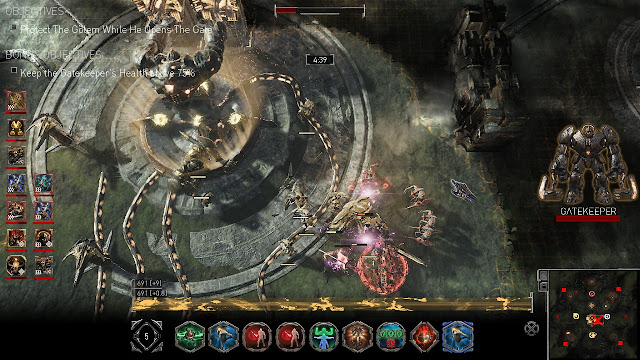 What the game does get right is the level design. Being clearly inspired by MOBAs, the action in Golem Gates is concentrated around a couple of key points, with the to-and-fro of the combat slowly driving sides back and forth, towards whatever the ultimate goal is. Furthermore, there’s some good variety in how the single player campaign is handled. They boil down to doing the same thing each time, but at least feel different; in one level you’ll be capturing points to make a bridge appear, at which point a huge horde will descend on you, making it a desperate battle to reach the end of the bridge and destroy the target building. The very next level you need to traverse a more open map, capturing key points to build a giant robot. Each level, in itself, is interesting, and some have a secondary objective to try and complete in subsequent play throughs (since those objectives aren’t made obvious the first time around).

You’ll need to complete the single player campaign, despite having a ham-fisted narrative so poor I was expecting Karl Urban to show up just to turn it into the kind of awesome-bad he achieves with films like Pathfinder and Judge Dredd. Unfortunately that was not to be, so you need to sit through the most ridiculous try-hard “dark fantasy” voice acting as an introduction to each level to get through to each level. You’ll do it, though, because it unlocks additional “cards” which act as your loadout going into each mission.

Cards are drawn from a deck at random, and can be summoned through an energy bar that slowly fills up as you play. This works very much like a CCG, though the game doesn’t have the depth of, say, a Hearthstone or Magic: The Gathering, and there are some decks and characters that are clearly superior. Without much incentive to really work on the deckbuilding, it’s hard to get too excited when you do unlock new cards… you’ll just throw them in as you acquire them from the campaign to replace the less good cards that are now redundant. 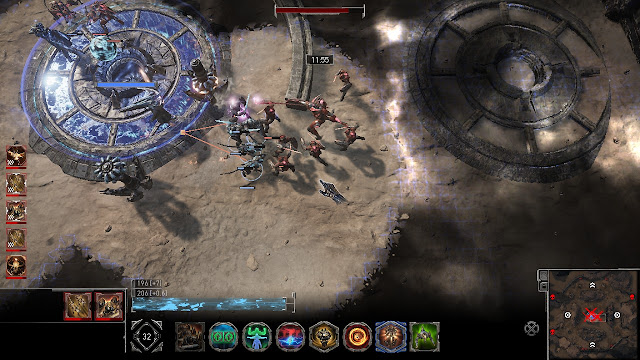 In theory all this single player stuff is practice and preparation, so that you can then test your strategic might in multiplayer, with there being both co-op (against AI) and competitive modes. Unfortunately, throughout my entire time testing, I saw a grand total of one other person trying to find a game, and that was once. We connected, and he left before the match even started. Not a good sign for a game in which the long term longevity relies on the multiplayer – you’ll need to grab a buddy, make sure you each have copies of Golem Gates, and organise a time to meet up and play to make the most of this one. As to how good it actually is once you get a multiplayer match going… I don’t know. It’s probably fun, since the game’s weaknesses are something that all players have to contend with.

For all its faults I couldn’t help but enjoy my time with Golem Gates. I’m a huge fan of the RTS genre, love my CCGs, and have dabbled in MOBAs from time to time. The game is basically custom-designed for people like me. I even enjoyed the setting, as overbaked as it was, and in theory I liked the industrial design of the units, though in practice I could barely make out on the Switch screen. It’s unfortunate that the action is too pacy for the Switch controls and there wasn’t more attention paid to strategic depth, balance, and how the games various systems would interact with one another, because Golem Gates had all the potential to be something truly amazing.