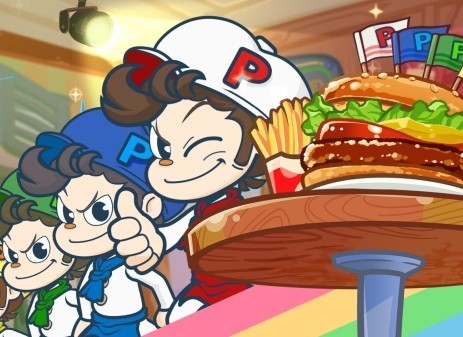 BurgerTime is one of those classics that never quite hit the highs of Pac-Man, Space Invaders, or Mario Bros, but is nonetheless a well-regarded title that sits just beneath the greats. The Data East original was released back in 1982 as something of a side-scrolling Pac-Man, and now it’s back courtesy of XSEED with BurgerTime Party!

Based on the E3 trailer, the core gameplay hasn’t changed much. You’re still creating giant burgers by running your little dude over each of the ingredients, causing them to drop down the level, and crushing the various sausage, egg, and pickle enemies that are caught underneath them. It was an abstract game back then, and it remains abstract today. Only now, with BurgerTime Party! there is also multiplayer! Yes, you can team up with buddies for some co-op action, or you can compete against them, by taking control of one of the enemies and trying to hunt the player down.

The levels are bright and colourful, the game’s personality is charming and light. I don’t for a second think that BurgerTime Party! is going to win GOTY awards, but it’s not about that. This is the kind of lighthearted fun title that you’ll want to have on your Switch for when friends are around, and we do need something to give us a break from Overcooked.

BurgerTime Party! lands in “fall” (spring to those of us south of the equator).

E3 2019: The sequel to Read Only Memories has been announced