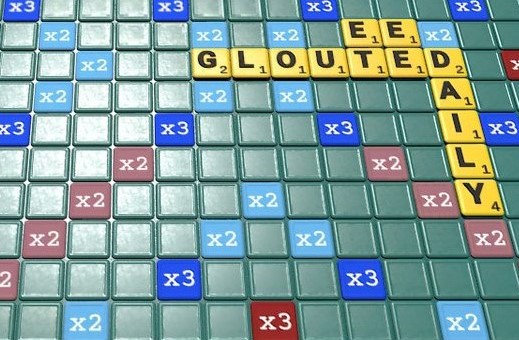 It must be pretty hard to screw up a Scrabble clone. But we now know that it can be done. The developers of Happy Words have lived the impossible dream and done it. This is one terrible clone of Scrabble.

I’m going to start with the AI, because the AI is the single most impressive example of blatantly obvious shoddy programming I’ve come across. If I was to develop a Scrabble game, what I would do is program the AI to have a range of vocabularies. A lower-level AI opponent would have a limited dictionary to work off, while the higher AIs would know just about everything that the English language has ever spat out.

Happy Words doesn’t have AI challenge levels, though. The AI simply taps into the database of words that forms Happy Words’ dictionary, and as long as the word’s in there, and the AI has the right tiles, the AI will spit the best word out for the situation. I’m pretty good with words myself. I’m a published author and I’ve been a journalist in five separate fields through my career. I was frequently scratching my head because the AI was throwing down words that had me reaching for a dictionary to confirm actually existed. Often they were archaic or disused words that might belong in a dictionary, but not on any Scrabble board that world champions aren’t competing on. 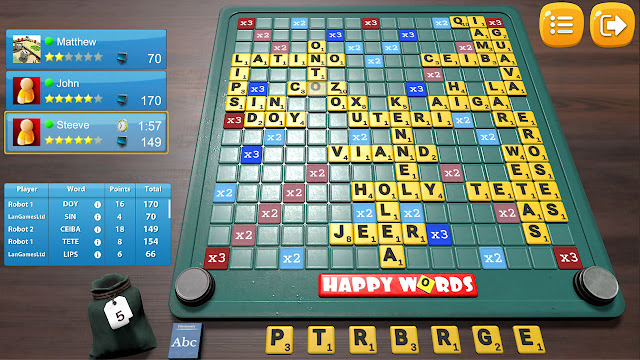 On top of that, as the board fills up, and it’s both more challenging to form words (while also being more letter options available), the AI starts taking forever to take a turn. It’s so obvious that its running the dictionary over every possible letter on the board. I could visually imagine the coding rolling in front of my eyes.

“That’s fine,” you might respond. “Scrabble’s designed to be played with other people, so get some friends and play online, you dolt.” I’d love to, except that I’ve never found a single game going in the online lobby. Not one. And no one joined my game when I tried to set one up either. Either I was really unlucky with the times I was trying to play, there was something wrong with the online infrastructure or (I suspect) no one else was playing this, but regardless of reason, I was stuck playing against the dull AI for my entire time with this game.

Don’t assume it plays well either. Oh no. The controls are a mess. You actually need to press down on that clunky control stick button on the Switch controller just to change the direction that you want to lay down tiles on the game board. There’s a pause every time you try and move the cursor, like the game needs to load it every single time, and navigation is made irritating in the extreme because you need to use a combination of the left and right control sticks, AND the D-pad, at various points just to play. I don’t think I’ve ever come across a UI that has been developed to such rank amateur standard before in my life. I actually struggled to simply adjust settings before playing. 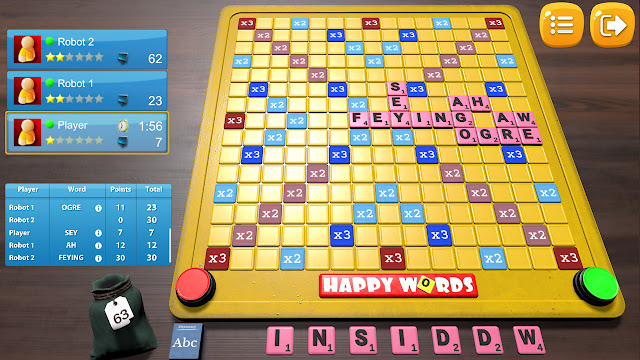 Happy Words also forgets to share critical information when playing, too. The game board works exactly as it does in Scrabble, meaning that scattered across the board are special squares that offer big bonuses. Those bonuses are split between “bonus letter scores” – meaning that if you put a letter on that space you get a multiplyer to your score for that letter alone, and “bonus word scores,” which gives you a big points boost, because the multiplier applies to the whole word if you place a letter on it on your turn.

In Scrabble there’s a little bit of descriptive text to remind you what square does what. In Happy Words, the spaces are simply coloured differently to one another. That’s fine for the huge point bonus red squares around the edge of the board, but as someone who doesn’t play Scrabble too frequently, I do get the light and dark blue score multiplyers mixed up, and Happy Words isn’t overly interested in helping me figure out which is which.

I knew going in to Happy Words that it would be a Scrabble clone, and I was fine with that. As a fan of Scrabble – and board games in general – I like the idea of having it on the Switch for on-the-go play. But when the AI is about as interesting as a parrot with access to a dictionary, a UI that actively wants to stop you playing the game, and a complete absence of anyone online to play with, I was left speechless, that a developer in 2019 was somehow capable of making a worse version of Scrabble than what we had on the Game Boy back in the 90’s.

A rather beautiful RTS about vikings is console-bound