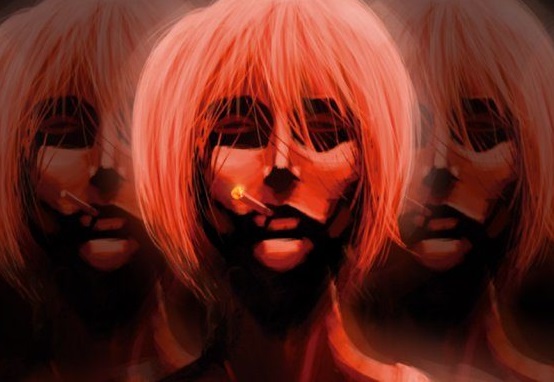 “Tonight I’ll die here, and I’ll take all of you sons of bitches with me” (you just threw that line in there so you could use swears in your review, didn’t you? – ed). Akane sets the tone for this slashfest right from the get go, and with an opening as strong as that, it’s all the more disappointing that I was left wanting something more from the game.

Set in Mega (not Neo) Tokyo, Akane shows off very little of its story. We know that Akane is doing her best to take out as many yakuza members as she can before she gets taken out herself. Akane understands that death is imminent, and that her best (and only) chance is to get with the ol’ hyperviolence and kill as many of them as she can before they get to her first.

This is all done from a top-down perspective and plays similarly to the likes of Serial Cleaner and Hotline Miami. Akane moves around a plaza, killing wave upon wave of yakuza with both a katana and a gun. The katana slashes with a simple button press, while the gun uses a combination of trigger button, right stick aiming and button press to shoot. On the surface, it sounds very simple, but the gun mechanics are a bit of an issue for the game right from the outset – the action is so frantic that I found myself often forgetting how to shoot. 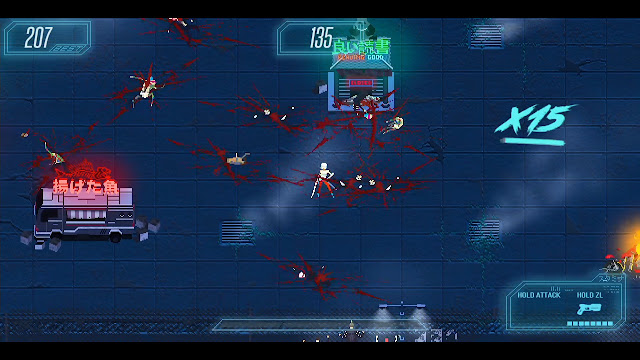 Akane is best enjoyed in quick bursts, and as something to tide a player over between tasks. Despite this, I found myself getting tired of it quickly, even when playing in short bursts. There is the inclusion of objectives that unlock better gear for Akane, though the intense difficulty made it difficult for me to be able to reach the majority of these goals. Goals to unlock gear include being at a kill-combo of 50+ when meeting a boss, killing 50 people with a gun and so on. Another issue with Akane is the gear system, though. Receiving new gear didn’t feel like it improved Akane’s fighting ability enough, so ultimately felt like a waste of time.

The idea of difficulty is one that often appears in video game discourse. I have always been an advocate for not putting an easy mode into a game if that doesn’t suit the themes of the game itself. Games like Dark Souls, Sekiro, Cuphead, and so on are, for my mind, appropriately challenging. No death is unfair in these examples. Rather, they become opportunities to learn for next time. Mistakes are part of the experience, and overcoming those mistakes and learning from them is where the achievement comes from.

I mention this because Akane is an example of difficulty done poorly, as it comes across as very artificial. It offers the kind of difficulty where some deaths will be unavoidable, either because of its random elements, or because you need to learn your way around through trial and error. A game that does difficulty well would be one that could, in theory, be finished on the first time, if the player is observant enough. You can’t do that with Akane. There’s nothing to learn here. Some might enjoy the way it hearkens back to the kind of difficulty that 1980’s arcades threw at players, but in 2019, there’s no point to this. 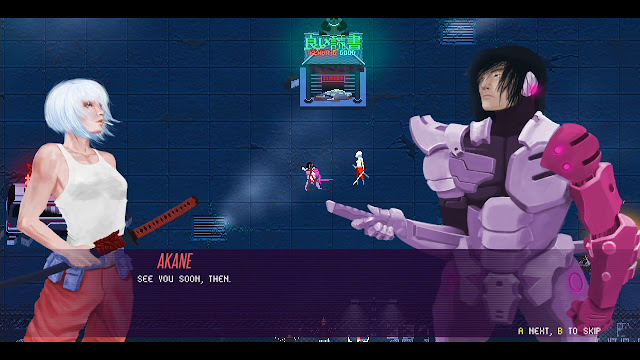 The gameplay also feels like a hindrance to progression. Akane is expected to make combinations of 50+ kills at a time in order to meet some of the challenges, but other mechanics in the game constantly fight against the player when trying to achieve them. Akane’s sword feels great to use, but it comes with a stamina bar. If there are eight enemies nearby, killing seven of them likely drains the stamina bar and requires a quick dash away. Bullets are limited, and killing yakuza with the katana yields additional ammunition. For a challenge to ask Akane to kill 50 people with a gun, it makes the player play the game in a way that’s just way too difficult to achieve. Akane earns additional guns which feel better than the initial gun, but by the time I earned them, I was just ready to pack the game in entirely rather than wanting to check out her new equipment.

Where Akane does excel is the artstyle. The pixel-art style that shows off the city plaza is full of super-intricate details that unveils something new every time you take a second to look at it. Lighting and shadows feel way more detailed than the pixels have any right of showing. The level of detail in the objects around the plaza look very nice as well, with dancing flames, fizzed out neon bulbs and more. Combined with some deep synth tunes, it feels like a pixelated mix of Ghost in the Shell and Blade Runner. Not a bad combination by any stretch.

Another nicety featured in the game is the variety of enemies. Though I still resent the sheer randomness and difficulty of the game as a whole, the inclusion of regular enemies, tanks (big muscly thugs), snipers, cyber ninjas and bosses do keep the game mixed up and at least interesting enough. Tanks take a few hits to kill, though concentrating on killing one results in losing your combo as hitting a tank isn’t enough to maintain it. The snipers often come in from the side of the screen and many of my deaths were as a result of not noticing them coming in. They do have a small visual cue to indicate they would be shooting at me, though which I did learn quickly was one of the most important things to watch out for. 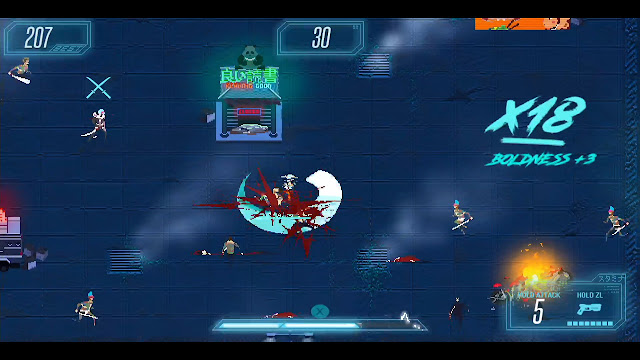 For every positive step that Akane takes in its design, there seems to be another mechanic in place fighting against it from achieving its full potential. The beautiful graphics are hindered by the fact that there’s only one area in the game. Racking up combos is hindered by the stamina bar. Using the gun is hindered by a severe lack of ammunition. A nice variety of enemies is cancelled out by the randomness of their placement. Earning new gear is hindered by the nigh-impossible expectations placed upon earning that gear. The game plays like it’s going through an internal struggle throughout, and it’s a shame because there are some really good ideas in here that could have made it great.

On the surface, Akane is a super difficult game that requires absolute dexterity with a controller. It has some fantastic ideas which sadly are all cancelled out by mechanics and design choices that fight against the good stuff. It looks gorgeous, and can be enjoyed in really short spurts, but unfortunately there’s just not enough substance in this game to consider recommending it above the vast array of games available on the eShop right now.