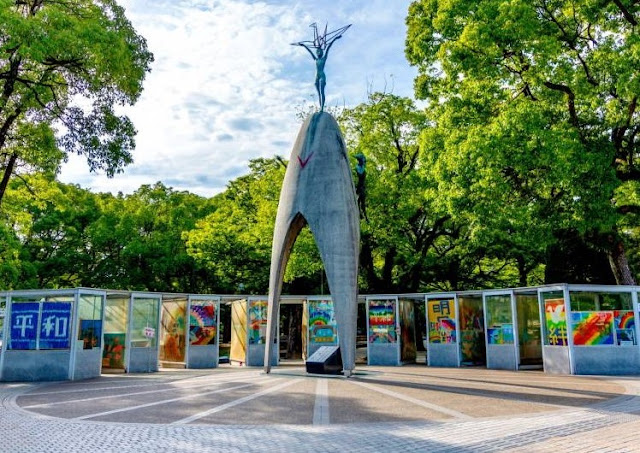 In the latest installment of Hollywood’s ongoing efforts to make everything in history about America, it is now making a film about the nuclear bomb attack on Hiroshima… and in a move that will surprise absolutely no one, it’s also making that film all about a white American. Not the actual victims of the bombing.

The film is called One Thousand Paper Cranes, and in theory it should centre on the story of Sadako Sasaki, a little girl who was two years old when the Hiroshima bomb landed incredibly close to her home. She actually survived that, but later developed cancer because of the nuclear radiation. With the hope of encouraging world peace, she set herself the task of folding 1,000 paper cranes (in Japanese culture, doing so will grant you a wish). Unfortunately, she never got there, folding only 640 or so before she died, age 12.

Her story is a poignant one – to the Japanese, who have formed so much of their modern culture and identity around the shattering impact of being the only victims of nuclear weaponry, Sadako’s story is poignant, emotional, and something critical to remember. Her story should be told around the world, but there’s absolutely no way that it should be done by Hollywood, because Hollywood can’t seem do anything about events outside of America without indulging in the offensively shameless nationalist narcissism.

Case-in-point: One Thousand Paper Cranes will not actually be about Sadako. It will be about the author of the book, Sadako and the Thousand Paper Cranes. Her name was Eleanor Coerr, and she was indeed an American. Because of course the really important message here, about a little girl dying of a horrible, unnecessary, white man-made affliction, is that some white woman found her to be enough of a curiosity to want to “tell her story”.

Coerr will be played by Evan Rachel Wood, who is a talented actor that will no doubt get the sentimental, sympathetic face just right to convince audiences of the good thing she’s doing in immortalising Sadako’s story in a book. The film will be directed by Richard Raymond, who previously helmed Desert Dancer – a film about young Iranians that break their country’s laws to learn western dancing techniques. So we already know that he’s got the talents and inclination to create films about “exotic” locations when he can spin them to share the message of how great the west is for these places. Most spectacularly of all, one of the producers attached to the project is Ian Bryce, who was previously behind Saving Private Ryan. That film is the very pinnacle of America’s “patriotism” and arrogance around World War 2 as depicted on screen, so you can be sure that he’ll be bringing an appropriately critical eye to this new project.

You may notice through my sarcasm there that there are no Japanese people among the lead creatives on this project. That’s not uncommon. Hollywood has a fine tradition of not bothering to include Japanese insight in any meaningful way when creating films about Japan. Be it The Last Samurai, 47 Ronin, Silence, Isle of Dogs, The Outsider, or almost any other film that is principally about Japan that you care to mention, you’ve got to look really, really hard to see where any creative input might be coming from the Japanese. Sure, there’s the inevitable platitudes about “consulting closely with Japanese experts” (look forward to that in Ghost of Tsushima, too – it’s not just about the games). Hollywood also needs Japanese actors in supporting roles to act as moving props so the film can look the part (aside from the white lead character, I mean), but all the actual creative decisions about films made by Hollywood and set in Japan are done by the experts on Japanese culture, identity, history and so one – by experts, of course, I mean the Americans.

Putting my sarcasm aside, if you need proof that Americans are actually supremely unfit to interpret Japanese culture and stories, then turn it into narratives, you only need to look at how badly every American “adaptation” of an existing Japanese film has played out. The Ring turned a book (and film) that was closer to tragedy than out-and-out horror into a terrible monster film, completely missing all intellectual and philosophical nuance behind the actual story. The exact same thing was done to Dark Water – a double whammy, since the original story came from the same author as the Ring. The Hunger Games as a property is an insulting spin on Battle Royale that aims to reduce it to the very lowest common denominator, and the American Godzilla films somehow completely misunderstand the charm of Godzilla. Finally, we don’t even need to see Your Name’s American live action remake to know that that will be absolutely terrible.

There is simply no precedent to suggest that American writers, producers, and film makers have any genuine understanding of Japan, or the Japanese. As one of the most ancient continuous nations on the planet, Japan has, over millennia, built a deep, rich culture of nuance, allegory, symbolism and metaphor into its storytelling. Meanwhile, half of Americans don’t understand the most basic of double-meaning techniques (sarcasm), and as legendary film maker, Peter Greenaway, once said “Americans don’t understand what metaphor in cinema is about. They’re extremely good at making straightforward, linear narrative movies, which entertain superbly. But they very rarely do anything else.”

The problem is that Japanese storytelling and straightforward, linear narrative are incompatible, and therefore any effort by Americans to tell a Japanese story – particularly one that carry the culture-wide emotional weight as the nuclear bombs, that doesn’t also include Japanese voices overseeing the creative side of things, is inevitably going to be one that will struggle to accurately depict the culture or its stories.

The saddest thing is that Hollywood could so easily finance a properly Japanese film. Japan has a huge film industry – it’s the fifth largest globally in terms of number of films produced (and note: America is fourth, not first as many might assume), and last year produced 613 films. Japanese films are well-regarded on the cinema circuit, and many of the Japanese film makers are particularly well-regarded by those who sit on the more artistic end of the global industry. The likes of Sion Sono aren’t making Marvel films, but they’re certainly the ones being talked about in film studies.

Japan has the industry and talent to produce films about Sadako Sasaki, if Hollywood really wanted one made. It would be produced to an exceedingly high standard, with top quality actors, writers, and directing talent. The only problem is that the film would have subtitles for its overseas release, and sadly, as we all know, one of the biggest inhibitions that “foreign films” face in the west is that audiences don’t like to read.

So instead we get whitewashed, shallow entertainment that seems to think the most important stories in Japan are those about the white people.