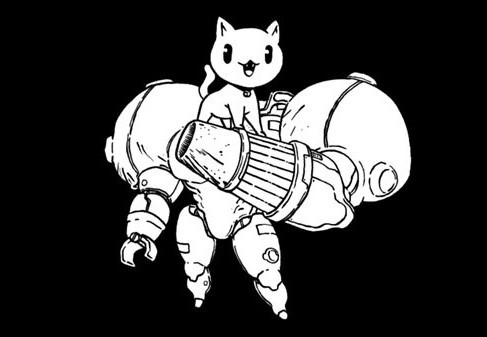 You can always be sure of one thing about anything Devolver Digital stamps its logo on; somehow, even when it takes on a project that is completely traditional in scope, it manages to find a developer to do something interesting with tradition. Gato Roboto is Metroid meets Blaster Master. It’s not hiding that or pretending otherwise. And yet I’ve been unable to put this preview build down. It’s brilliant.

And I don’t even like Metroid. Or Blaster Master. Go figure

Part of the appeal of Gato Roboto is the main character. It’s a cat. A hero cat. One that jumps into a robotic suit and goes on an epic, deadly quest to save its owner, who is trapped (and in great danger) from his crashed space ship. Now, as anyone who has ever owned cats knows, we all wait for the day that the damned felines up and prove their loyalties to us by doing something heroic… but that never actually happens. Really, cats are sociopathic little monsters that would slaughter you in your sleep if they could figure out how to work the can opener to open their tinned food and render you completely redundant to their interests.


BUT THEY’RE SO CUTE AND FUZZY AND DO THE FUNNIEST, FLUFFIEST THINGS. So we all live with cats, and try oh-so-hard to make them love us and now we can play Gato Roboto to live vicariously through the fantasies of a game developer that actually still believes that cats can be heroes. What a brilliant and impossible idea.

(Incidentally, and I know I’m getting off topic here, but if you’ve ever owned a cat you’ve got to read a short story by an author called Saki – it’s called Tobermory and it’s the funniest thing. A dude teaches a cat to talk and you can only imagine how distressing it is when suddenly the world has cats that are able to say exactly what they’re thinking).

Back to Gato Roboto. This brilliant little retro platformer plays close homage to the Metroid of old. The developers clearly did their study; the black & white visuals, coupled with the discordant soundtrack are immediately reminiscent of the Game Boy Metroid II: Return of Samus, and the gameplay backs that faintly hostile and uncomfortable tone up. The infamous moment at the start of Metroid where you need to run in the opposite direction to what gaming instinct wants you to (i.e. you need to run left at the start, rather than to the right), is recreated perfectly. Just like in Metroid, everything is deliberately unsettling, right out of the box. 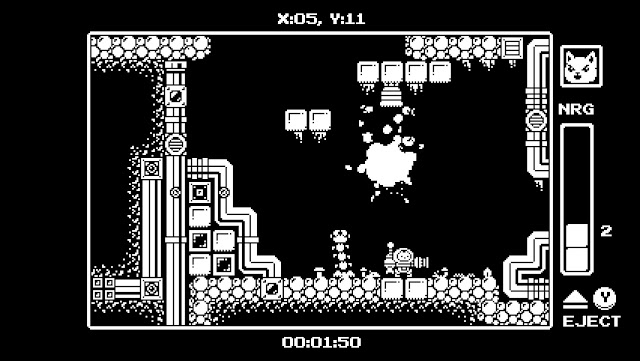 As the adventure pushes on Unlikely Hero Cat wanders back and forth across the world, accessing areas that were previously inaccessible as his arsenal grows. Bosses are challenging, but adorable (the first one’s a cute little mouse because of course that would be the first thing the cat really looks to torment, but he disappears in a puff of smoke after being defeated. Portentous!). Structurally it’s so familiar to Metroid that I wouldn’t be surprised if Nintendo reaches out to this developer in the near future.

There is one neat trick that Gato Roboto has up its sleeve though that separates it from Metroid; Hero Kitty can jump out of his suit to skulk around areas the suit can’t fit. Suitless kitty is KOed by a single enemy hit, and naturally lacks the weapons that are available to him in the suit, but he has some nifty ninja moves like wall climbs and jumps, and can also go for a swim, where water damages the robot suit. That’s pushing believability in this fantasy a touch too far, mind. I can’t resolve in my head the idea that this hypothetical hero cat would actually get wet for any reason, no matter how close to death his owner is. But there you go.

In case you haven’t guessed already, Gato Roboto’s other delight is its sense of humour. There’s not much by way of narrative, but it’s so bright and good natured that every second of it is a delight to play. The narrative’s supported by charming pixel work that makes every enemy, environment, and the hero meowzer drip with personality. I have issues with the game at this stage – I’m not sure I totally understand how to read the map, and on principle I hate backtracking in video games (it’s literally padding), and Gato Roboto’s execution of the backtracking is better than in some other Metroids, but still just a little too indulgent for my tastes. Then again, Metroidvanias aren’t my thing, but plenty of other people love them, so that backtracking stuff will probably appeal to those people much more. 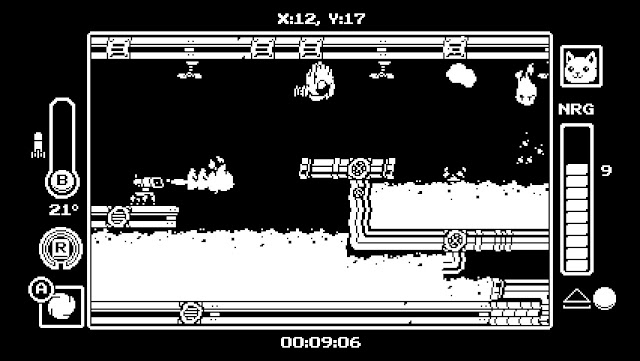 Other than perhaps walking away with a misplaced faith in the goodness of cat-kind, Gato Roboto’s not going to teach you anything. It’s a pure-play retro indulgence that hearkens back to Metroid in a way that somehow manages to avoid feeling derivative. I think it’s the cat. His ability to go crawling about the place free of his suit is a great touch. I think this might just end up being be the first Metroidvania that I’ve loved in many, many years.

Gato Roboto is exclusively coming to Nintendo Switch and PC at this stage (yes, I edited the video in ShareFactory, but unfortunately there’s no PlayStation 4 version just yet)

Here’s the baseball game I actually want to play