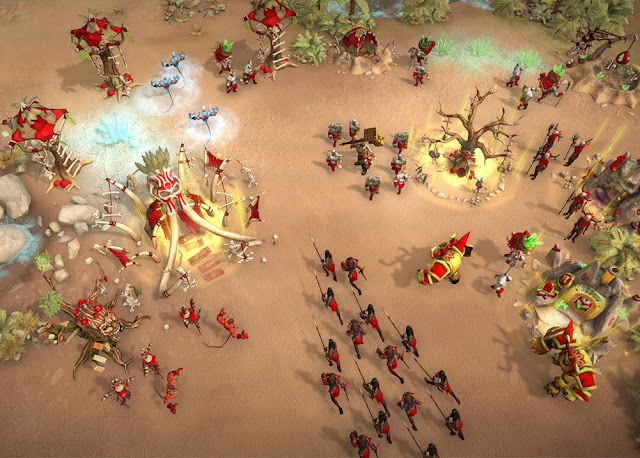 There was a time where the RTS genre was beautiful in its simplicity. When you look back at the early Warcrafts, the original Starcraft, Age of Empires, and Command and Conquer, there was a consistency in them; you’d send workers out to gather materials, use those materials to construct buildings and recruit units, power them up, and then go wallop the other side. There was minimal complexity beyond that, and it was elegant and beautiful.

Sadly times chance and while Stone Age-themed WarParty is an genuine and well-meaning attempt to offer a spot-on recreation of that classical approach to the RTS, it also comes across as shallow and limited in scope.

WarParty has three factions, and to the developer’s credit, each genuinely plays differently. The standard human faction is as boring as beige, but the other two factions have some character to them – one faction recruits a legion of dinosaurs, and another is led by a necromancer who gets to re-purpose dead bodies on the field as zombies. The different themes with each of these factions means that you do approach resource collection, unit building, and attack strategies slightly different, and in itself that’s enough to spend a fair bit of time playing with all three to get a feel for which is your favourite.

An actual RTS on Switch. Is it good, though? Hm. #NintendoSwitch pic.twitter.com/HMaKZ15H5D

Each faction has a couple of “generations” that it can upgrade to, each of which provides more powerful units and a greater range of buildings to choose between. There are also two different resources to manage, and making sure that you’re constantly escalating the collection of both crystals and food involves a great deal of the kind of busywork that people nostalgic for the old days of the RTS will find deeply appealing.

Unfortunately, while there are a lot of units to build and upgrades to earn, WarParty’s biggest problem is that it’s a complete slave to an issue that was felt across basically every classic RTS – there’s very little strategy involved. Victory is determined by who can build the most powerful units the quickest, and can swamp the enemy before they get swamped in return. Come from behind wins are a near-impossible proposition, and when they happen it’s more luck than strategy that will get you through. This is especially true thanks to the gamepad controls – it’s a pain to juggle more than one unit at a time, and in acknowledging this, the developers have structured the gameplay around controlling a single large unit at all times instead. Maps are kept small, and defensive options are limited, so you’re all-but mandated to rapidly build up a mob and then go on a rampage, hoping that your mob is the more powerful one than your opponent.

Because the foundation in WarParty is so limited, just about everything else in the game that sits on top of that has had to be designed in kind. AI is barely “I” at all. It gets more difficult as you ramp the difficulty setting up, but that’s only because it gets far, far better at building up its swarms with perfect timing. The AI exhibits no capacity for strategy whatsoever, which is a particularly big problem on the Nintendo Switch, since there’s no multiplayer of any form either (I can’t speak for other platforms that the game’s available on). 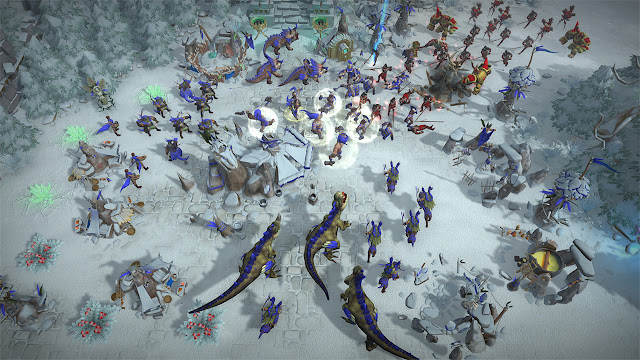 Maps are also tiny, like they’re condensed versions of typical map designs from other RTS titles. There’s disappointingly few of them, and none of them show interesting design – if they had have done that I would have been happy to forgive the other faults. They’re not even interesting on the eyes, thanks to the awful, poor resolution of textures.

The one thing that WarParty has going for it is the variety in single player modes. There’s a campaign, skirmish mode, and even a horde mode, where you need to survive as many waves of enemy critters as possible. Sadly, each of these have problems. I spend most of my time in the skirmish mode in RTS titles, but in WarParty, the lack of maps and their truncated size was a killjoy. The campaign mode has an embarrassing narrative and is plagued by the worst voice acting I’ve ever heard (yes, I do remember Tidus’ laugh in Final Fantasy X). I’m not sure if they were going for humour, but whatever it was, it fell as flat as a bungie jumper whose rope has snapped. The horde mode was an interesting and potentially intense idea, but because of the difficulty of controlling multiple units at once with the Switch controller, once enemies came in from multiple directions, it was mostly a matter of hoping for the best.

Finally, the game is terribly optimised for the Nintendo Switch in handheld mode. Text is so tiny that it’s almost impossible to read, and because the resolution is so low, units and buildings all kind of blur together. It’s really difficult to make things out. 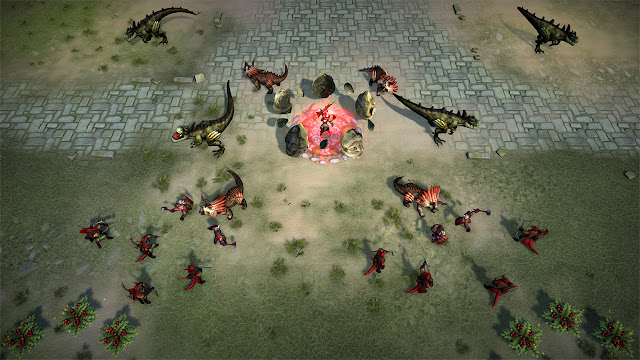 As the first RTS on the Switch, WarParty is an brave attempt to emulate the glory days of a genre that has long moved on in terms of what it offers players. Admirable as the attempt might be, though, the game is so unrelentingly unpleasant to play, and so limited in scope, that I think I’ll be sticking to the plethora of superb turn-based strategy titles that are also available on the console.