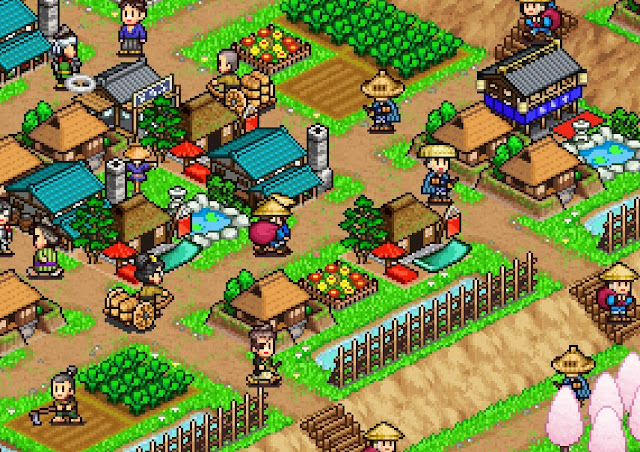 Ninja Village is a Kairosoft game, and if you don’t know what that means, then you haven’t played a Kairosoft game before. The developer, which previously stuck to the mobile platform like glue, has recently hit the Nintendo Switch with a flood of ports, and has a very specific formula and aesthetic. Ninja Village is much like the other titles already available on the Switch, in other words, so if you’re only going to get one of these, whether this is the one to go with really depends on your interest in its theme.

As the name suggests, in Ninja Village, your job is to build and manage a village of ninjas. This plays out much like every other Kairosoft “city builder” simulation; you create buildings for your ninja to live in as they move into town, and then you build businesses to give them jobs. This starts out as simple fields to plow with vegetables, but the businesses that you have access quickly grows to include tea houses, dango stores, and a range of other traditional Japanese industries.

Another element that will be familiar to anyone that’s played a Kairosoft city builder before is the way that you need to manage space. Buildings can have a positive impact on other buildings around them (in terms of the efficiency and profitability of the building), so you’ll often need to play a game of positioning to try and get the most synergistic collection of buildings together possible. You can’t really fail at Ninja Village, but getting a really good score relies on you understanding how to balance what you’re building with the positive effects that those buildings provide, when you’ve only got a limited amount of land to work with. 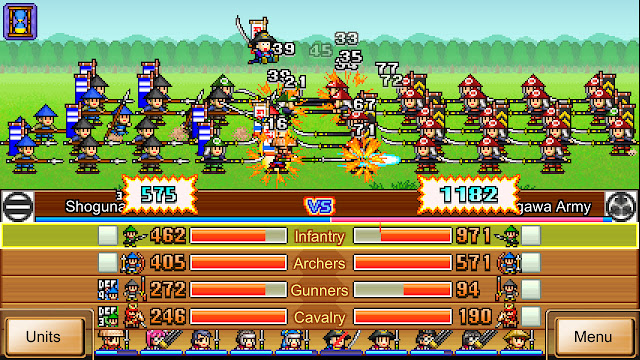 The one part of Ninja Village that’s different to other Kairosoft titles is the strategy element. Yep – you get to build an army of ninjas, soldiers, and heroes, and go conquer your way around Japan. This system is quite simple; you pay money to recruit new soldiers, archers, gunners or mounted samurai, and then select a region to attack from a map of Japan. Then your forces will square off against the enemy with two “rounds” of attacks. If you defeat all the enemies within that time, you capture the territory. Otherwise you’re defeated and need to go rebuild your forces before trying again.

For the most part, this strategy element is just a matter of having more soldiers than your opponent, and there’s a significant advantage to loading your army up with ranged units. Gunners and archers attack before the melee units (and horsemen go last), so if you’ve got a lot of gunners you can clear away a lot of enemies before they can counterattack. There is the ability to give units better equipment, though, so it’s not a completely hands-off strategy game. Simple as it is, it’s a lot of fun to watch armies of cute little pixel soldiers bopping away at one another.

Capturing the later territories in Japan is one hell of a grind. The size of the army that you’ll need (and the cost to get there), requires that you’ve got one very well-designed ninja village, that’s producing a lot of high-value goods and making you a lot of money. Even then, there’s a lot of downtime involved in Ninja Village, where you’ll simply be waiting to have enough cash to build the next thing that you need. 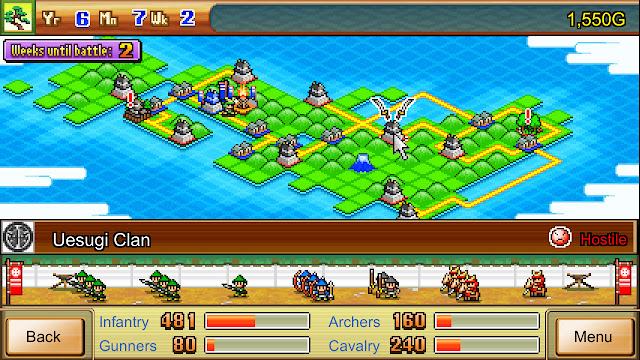 Of course, Ninja Village is so bright and charming it’s impossible not to get drawn into playing yet another Kairosoft title, and then staring at the screen for hour upon hour. These things are always so perfectly low-pressure playable, that they’re just that much easier to open up than the more complex and detailed city builders available on the Switch. That’s not to say it’s necessarily better, but when you need to simply chill out, there are few better that do it better than Kairosoft.

The next Soulcalibur VI character lands on March 26