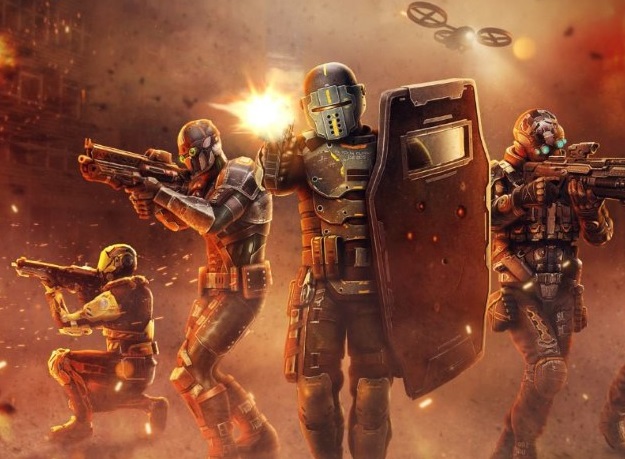 Gameloft represents a lot of things that I find genuinely offensive about big business game development. The company takes popular ideas that other developers and publishers have pioneered, cribs them wholesale, and then dumps them for free (or close to free, but of course always with exploitative microtransactions) on mobile devices. It also focuses purely on aesthetics, aiming to get the games looking as close to the ones they plagiarised – sorry, were inspired by – while never bothering to hire creative writers or level designers to repeat what it was about those original games that was actually worth meriting.

As a result, Gameloft games are always technically competent, but hollow, shallow, and meaningless. Modern Combat is that philosophy towards the military shooter genre, driven by the likes of Call of Duty or Battlefield… a genre that I have issues at the best of times, let alone adding “hollow pastiche” to the list of criticisms.

Blackout’s main focus is in the multiplayer. There’s a single player “story” mode, but it’s utter, incomprehensible, insultingly generic nonsense, and is broken down into missions that are over in what feels like seconds. As the original release of Blackout on mobile was as a free-to-play game, Gameloft would have hurt its profitability to give too much gameplay to players before whisking them back to the main menu and encouraging them to spend money. As we know, Gameloft isn’t a fan of hurting its profitability, so the “story” missions are a joke that are over in the blink of an eye.

Also, to digress for a moment, there’s a character called “Miku” that doesn’t have long green twintails. Unforgivable.

People think I don’t like shooters because I’m bad at them, but nah, I hold my own. #NintendoSwitch pic.twitter.com/E5MJDFEL1U

Multiplayer makes more sense for this kind of experience, because multiplayer matches are the kind of short, repetitive gameplay loops that can meet Gameloft’s KPIs without feeling shallow and limited by the monetisation model. Matches are six minutes long, across maps that are of a reasonable size, and instantly familiar to anyone who has played Call of Duty or Battlefield games in the past. Mechanically they’re also well structured, though the game does have a tendency to register damage done to your character when you’re hiding behind a wall – an issue that was back on the PlayStation 3’s Modern Combat, and Gameloft seems to have never bothered actually fixing.

As you complete missions or multiplayer matches, your character will level up, which leads to better equipment for dealing death in matches. The game is heavily weighted towards indulging the player’s FOMO, and encouraging them to spend money so they can keep pace with the stuff that the higher level players are taking into battle. The big problem with all of this is that the Switch version has a not insignificant upfront cost, and this kind of power curve is simply unacceptable for a “premium” title.

It looks nice enough in screenshots. Derivative, yes, but well made. Unfortunately Modern Combat also moves with what can only be called industrial-strength jank. The frame rates remain smooth enough and whatever they’re set at, but characters have stiff, uncomfortably jerky movement animations, which is especially noticeable when they’re running (which is most of the time, when there isn’t a gunfight). The shift out of that animation loop is also too lengthy, and it’s possible to lose lives because the process of stopping moving, turning around and then firing is all far too clumsy. The head-bopping animation to simulate what the human body sees in motion is also exaggerated painfully, and power slides and the like look ridiculously cheap in execution. Weapons also don’t feel particularly inspiring to shoot. In other words, while Blackout looks derivative of better shooters, but a decent job of capturing the aesthetic overall, the standard of the gameplay is simply not there.

But here’s the big, dirty secret about Blackout – and Gameloft’s output in general – the no-frills approach to doing this kind of blockbuster experience is easy to pick up and play, and then easy to keep playing on a regular basis. Because there’s nothing important or meaningful about the game, it’s easy to play for short bursts between other things, and there doesn’t feel like there’s any consequence, whether you win or lose. It’s hard to feel overly competitive while playing Blackout, in other words, so it’s blissfully free of the intensity of some of the other shooters out there.

So yes, while it’s frustrating for the game’s terrible matchmaking system to pair you up with a group of low-ranked novices against a crack team of over-equipped super-soldiers, and it’s annoying to have to grind for hour upon hour to have competitive equipment, it’s also easy to take both wins and losses in stride, partly because the game is poorly made and irrelevant enough that it’s impossible to care, but also partly because it’s designed around such short matches that the weighting of each individual match is low.

Modern Combat: Blackout isn’t a great game by any stretch of the imagination, but it’s playable enough, and it’s the only military shooter of its kind currently available on the Nintendo Switch. I’d suggest that you’re better off with something like Splatoon for competitive hijinks, or City of Brass if you’re looking for a simply well-made first person action title, but there’s an enduring audience for the military shooter for some reason, and Gameloft’s figured out a way to make people pay $Aus30 for something that for all intents and purposes should be free. Good for them, I guess.

Far Cry New Dawn: A look at what this game’s all about